It remains to be seen whether the digital world of today will become more hostile to women in villages than their physical reality, which is currently dominated by men who lord it over them 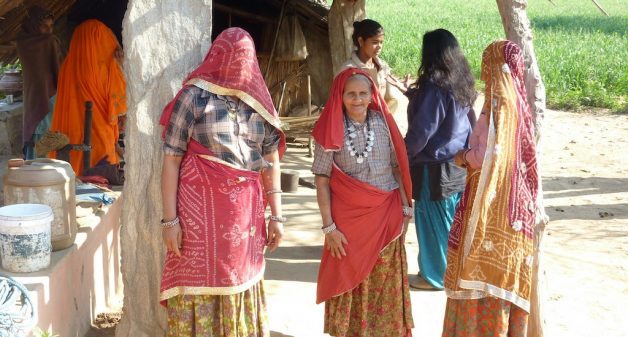 Will digitization give new voice to village women? (Photo by Christian Trachsel)

“I have been saving a little each month. I must guard that money and also the goat, which is about to deliver kids. Pola is coming. My husband will grab my money and sell the goat. He will come back drunk on Pola and beat me up. In his excitement, he will dirty his dhoti, and I will have to wash the mess tomorrow. Oh God, how will I face the SHG (self-help group) women then? Why don’t you take him away?”

About 25 years ago, I had my first and harsh brush with the stark reality faced by our rural sisters. It was a dark and rainy August night. We were sitting on the floor of the home of the chairperson of the SHG in a village in Yeotmal district in Maharashtra in which the Association for Serva Seva Farms (ASSEFA) worked.

After a sumptuous meal of jowar roti, chun (a popular local dish of tur daal) and raw onion, Krishnatai, a rustic poetess, sang a song she had composed. A prosaic translation of that song appears at the start of this article.

I was moved and could scarcely hide the tears forming in my eyes. Are men so bad? My subsequent observations have tended to firm my belief that an average rural male in India can easily behave like a rotten skunk. He tills his farm, and the world makes a song and dance about the hard-working Indian farmer.

But having done that, he lords over his wife, sits and smokes bidis as she slogs the whole day. He grabs what he can from her earnings and gets drunk, and then goes home and hits her for not making the meal of his choice.

The funny thing is that even these oppressed women consider it just their destiny but do not think this behavior wrong. After all; they believe; their husband is their owner and they are his property. Words like Dhani or Malik — both meaning owner — are commonly used to refer to a woman’s husband.

Even more remarkable is the fact that women may actually take pride in the fact that their husband beats them up. In an interaction in some other village, a lady told me: “He does not beat the woman in the street. He only hits me because he loves me. What sort of a man would a husband be if he does not hit his wife once in a while?” But domestic violence is a special case. Let us move on with the topic at hand.

Across most regions and in virtually all communities in India, one sees domination by men over women in all spheres of life and the institution of the social system that perpetuates such domination. This patriarchy is ingrained in our society. All of us have been socialized to accept it, consider it right, and yes, even just.

Women who challenge it become mavericks rather than role models. I explore whether the brave new world of digital India will perpetuate this patriarchy or help women overcome some of its oppressive features.

The portents are pessimistic. In fact, most technological advances tend to favor the established order and perpetuate the domination of the powerful. For instance, mechanization in farm sector has tended to displace workers pushing more of them out as unskilled migrant laborers. Profusion of two-wheelers and other motor vehicles has enabled the better off to tap more opportunities in education and livelihoods even as those without these vehicles lag behind in their remote oblivion.

Some other technologies have created new dependencies. Deep bored tube wells have made all dug wells dry, and a farmer wishing to irrigate his farm now is dependent on the tube well owner. And so, how will the brave new world of digital technologies affect women, who in all sections of society are at the bottom of the pile?

It is commonly known that literacy rates among women are lower than among men. Rural women either do not have any phone at all or if they do, it is usually a numeric keyboard feature phone. Smartphones, if any, are owned by husbands or sons. Women tend to keep their savings in SHGs or folded notes in the recess of their dresses, carefully hiding it from their husbands to avoid it being grabbed and misused.

Jandhan accounts and direct benefit transfers have started to include women in the modern world of finance. What then happens is entirely on expected lines. The average poor lady does not know reading or writing though she is shrewd enough to know how much money she has in her account. But to access it, she depends on either the bank clerk or her son.

Earlier also it was so. But that time, more of them could recognize the numbers on the papers on which they put their thumb and could make a guess if what was being done was okay. And they always accepted it peacefully if the son or the clerk took a bit out of their money.

But they have additional problems in handling ATMs. Often they do not know how to use the card. Even after swiping it, they cannot relate the PIN they know so well in their mother tongue with the intimidating sort of keyboard of the ATM and even more intimidating displays on the screen.

So what do they do? Their son or the husband now keep their card. The son or the husband operates her account. And she cannot access it any other way. Is it surprising that hundreds of women approach their banks to please, please disable their ATM cards? If this relatively simple interface with the digital world has caused such distress, how would the increasing level of digitization impact on the women?

Arguably, going biometric, as some banks have done in Tamil Nadu, eliminates the literacy issue. But if most service providers have their website transactions only in English or at best fairly complex vernacular and if the current literacy levels among women do not rise fast, is the digital world going to become more hostile to women than their current world? How will we fight the newly emerging digital patriarchy?