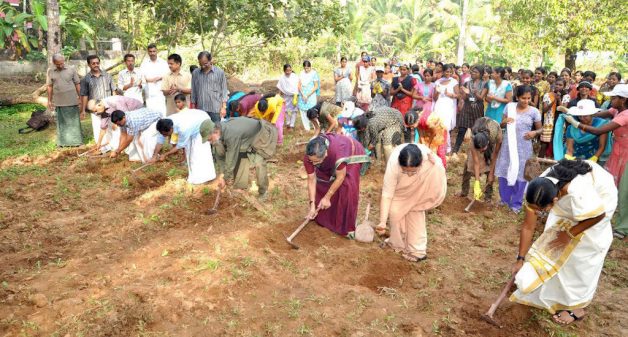 At a time when excessive use of fertilizers and pesticides has become the norm in agriculture across India, a small community near Kozhikode in Kerala is making an effort to return to much healthier practices of organic farming.

“The basic aim of cultivation is never only harvesting only. It is an attempt to make our lifecycle complete,” Babu Parambath, green activist and Project Director of Niravu, told VillageSquare.in. “That is what the Niravu initiative is trying to communicate to society.”

Niravu, which means fullness, is today a proven example of the successful efforts of a community to regain a bygone lifestyle. It is a collective engaged in organic cultivation and related nature-friendly activities. Niravu started as a residents association of 101 households in Vengeri, a small village on the outskirts of Kozhikode.

In 2006, V.S. Achuthanandan, the then Chief Minister of Kerala, requested social workers to focus on the development of Kerala in his golden jubilee year speech to the state. Keeping these words in mind, some social activists in Vengeri planned to conduct a survey with the help of National Service Scheme (NSS) students of Providence Women’s College in the neighborhood.

They selected and trained 100 students, who then visited 1,824 houses in the village to gather detailed data. The findings were alarming. Many residents were suffering from different diseases; seven among them were cancer patients. Twelve years ago, this was considered to be a scary number, especially in a less-polluted village like Vengeri.

Till that time, advertisements taught people that smoking and drinking are the main causes of cancer. But here, five patients were women out of the seven. The activist sought expert opinions to explain this and found that toxins that are released while burning plastic waste and the presence of chemical pesticides in rice and vegetables may cause cancer.

“We never used plastic things at home. Rice and vegetables in our own fields and backyards fed us in our younger days,” said 76-year-old Lakshmikuttyamma. “We usually grew spinach, bitter gourd cucumber, ash gourd and drumstick in our backyards,” another elderly women echoed.

Though Vengeri had been an agriculture-dominated area, gradually people turned towards other occupations. “They tried for white-collar jobs and sent their children for higher studies. They lost interest in farming,” Lakshmikuttyamma told VillageSquare.in. The backyards were neglected and plastic waste piled up on them.

The piles of garbage behind every house left the activists confused for a while. Suggestions came again from older wisdom. “Each family should clean up their compound and surroundings. It may not take more than half an hour. Collect plastic, glass, and metals and keep them aside. Use the bio-waste as manure,” they said. 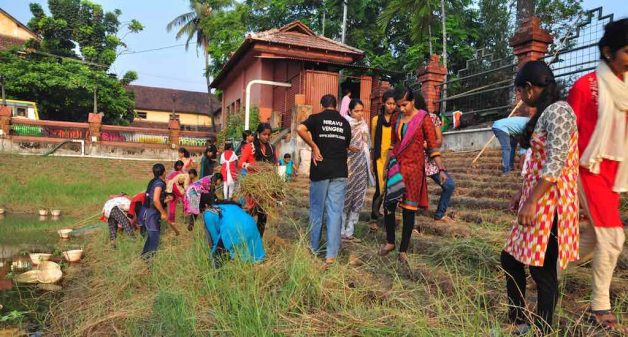 This made things easy. Non-degradable wastes sent to different recycling units. Community activists conducted campaigns and awareness classes, approached each family and sought their support. It wasn’t easy to change a lazy habit to a responsible initiative. Finally, 101 households came under a banner called Niravu and formed a residents association. The association was registered later in 2009.

Each family started vegetable cultivation. It varied from 3-4 tiny pots to acres of land, according to space availability. Rice cultivation was also restarted. The older generation happily handed over conventional seeds they had preserved. They also used cow dung as manure.

The young generation promised them organic hay as fodder in return. Niravu members, senior citizens and students joined hands in all activities. The NSS units of the Providence College voluntarily took part in these programs.

“Together we ploughed the land, did seeding, weeding, watering, manuring, and of course, harvesting,” an old student recalled. “Farming was a new experience for us. We gathered a lot of practical knowledge from the village. Elderly people considered us as their family members.”

“Quality change never comes fast,” said a confident Babu. “When we approached the agriculture department for guidance and support, they raised counter arguments. Don’t jump into trouble, no sufficient laborers, new generation wont accept, seeds are not available, all efforts will end up in huge loss, they said,” he told VillageSquare.in. “We didn’t argue back.”

“Discussions went on. We collected conventional seeds from old farmers’ reserve. We requested our girls who migrated to other places by marriage to collect seed varieties from those places. Daughters-in-law of our area brought in seeds from their places too,” said Reema, another resident of Vengeri. “This helped conservation of many rare seed varieties.”

In the time of protests against BT Brinjal, a genetically modified variety, Niravu participated in the movement by producing 100,000 conventional brinjal saplings. This brinjal variety was later certified as Vengeri Brinjal by the authorities.

Many other appraisals brightened the way. The ward was declared as the first organic ward in Kerala. In 2010, the Chief Minister chose Vengeri as the venue to declare state’s organic policy. Every now and then, Niravu hit news headlines with its achievements. It grabbed national and international attention. Organic optimists and study groups came to see the wonders that have been achieved. The initiative bagged many grants and support.

Niravu values the older generation’s experience and the young generation’s technical knowledge equally. “We took children to new sights, to new places, to new cultures and allowed them to develop their own attitudes,” Pradeep, a Niravu member, told VillageSquare.in. “Travelling helps them to gather knowledge. They interact with people and document their experiences.”

In December, Niravu again hogged headlines by introducing Midori, the first of its kind expo focusing on the organic way of life. They arranged the expo in 101 member houses. Each house demonstrated unique models.

The Japanese word midori means greenery. Anjali, one of the coordinators of the event, shared the details. “Each house surprised visitors with a novel model. While one plot describing the possibilities of terrace farming, another showed you a perfect sanitation system. A model cowshed showed how to keep the place neat and tidy,” she told VillageSquare.in. “We collectively nurture Kasargod Kullan, an endangered cow species in the state, in our village.”

Spreading shade to all

Niravu marked a remarkable growth from a resident association to a registered company with five major divisions two years ago. “We converted half of our total 63 acre land to organic cultivated area by systematic and selfless efforts,” Rathikala, in-charge of sustainable farming, told VillageSquare.in. “We opened an outlet for Niravu organic products with the help of NABARD.”

Niravu today supports many waste management programs. The Calicut International Airport and IIM Kozhikode are some of its leading clients. A number of schools and colleges, local bodies and offices also seek technical support from them. “We proved living with nature is not an impossible task,” said Parambath.