New diseases and erratic weather have led to a dramatic drop in orange production, endangering the livelihoods of farmers in northeast India, where it is a major cash crop 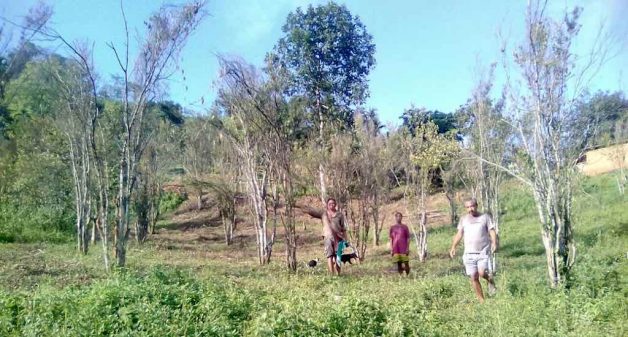 The hill districts of Assam in the eastern Himalayas have traditionally been famous for their succulent fruits and vegetables. Mandarin oranges, in particular, originate from the districts of Karbi Anglong and Dima Hasao in the Brahmaputra valley. Over the last decade however, orange orchards have been taken over by pests and diseases, resulting in immense losses for farmers and forcing them to look for alternative crops.

Experts said a change in weather patterns – with warmer temperatures and erratic rainfall – is another reason behind the disappearing orange orchards. Mandarin oranges are one of the main commercial crops in the region, and an important source of income for farmers in northeast India.

Roben Singnar a farmer from Deithor in Karbi Anglong, said agricultural patterns have changed in his village over the last few years. “Ten years ago, orange cultivation was very profitable. Most of the people in my village, maybe around 200 households, were involved in orange farming. But not anymore,” he said.

The problem began when farmers noticed the discoloration of leaves of orange trees. “The leaves would turn reddish,” Roben explained. Then production began to fall. Roben’s brother, Nelson, said that a tree that had typically borne 1,000-1,500 fruits started bearing 50-100 oranges of acceptable quality. “Orange harvesting happens once a year and our four-hectare orchard had, at one point, given us an earning of Rs 1 lakh. But now it’s so minuscule that it’s as good as nothing.”

Similarly, in Dima Hasao, the once-famous orange orchards around the hill station of Jatinga have started to vanish from the landscape. Marshan Pyrnge counts himself among the last remaining orange cultivators of his village. “Earlier almost the entire village, about 250 households, were dependent on orange farming. Now I am among the 15-20 farmers still involved in orange cultivation,” he said.

The sharp decline in production has been attributed to a viral disease afflicting oranges called citrus dieback. The leaves of the tree start drooping and become discoloured, while the fruit turns yellow. S. Thangngew, the district agriculture officer in Dima Hasao, said, “Citrus dieback causes gradual deterioration of the plant. Changes in the weather pattern, like erratic rainfall and increase in temperature over the last few years have also played a role in affecting orange production.”

The problem, experts say, is not in the quantity of rainfall, but in its distribution. There is excess rain on some days – sometimes leading to floods – which creates drainage problems. Prolonged dry spells at other times affects the soil moisture.

The Assam State Action Plan On Climate Change (2015-2020), which analyzed data between 1951 to 2010, states that  mean temperatures in the state have increased by 0.01 degree centigrade per year, and annual rainfall has fallen by 2.96 mm per year. These factors could reduce GDP growth in agriculture by 2% according to the plan.

On top of this, in Dima Hasao, deforestation – caused by major highways and other projects — has also played a role in lowering groundwater levels, district officer Thangngnew explained. “These are contributing factors (towards orange production decline),” he added. 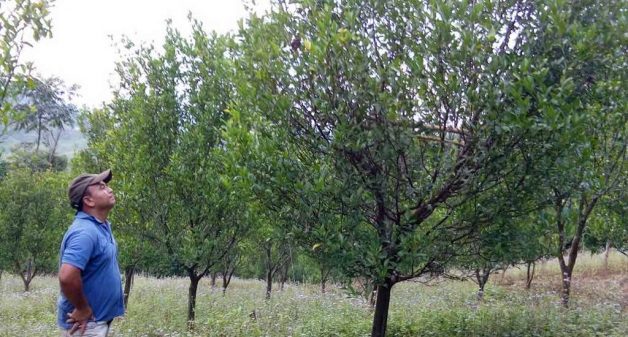 Amrit Borbora, chief scientist of the Citrus Research Station in Tinsukia (Assam), agreed and added that apart from viral diseases induced by climate change, the production of mandarin oranges has also been affected by a bacterial disease called “citrus greening”, also known as Huanglongbing. Interestingly, a similar trend of viral and other diseases have hit orange production in the neighboring country of Bhutan, also in the Himalayan range. Climate change and its manifestations like erratic rainfall have been attributed as one of the reasons.

“Another effect of climate change has been the spurt of new pests. Pests like looper caterpillar, string bug, and meley bug were not reported earlier in citrus fruits like oranges,” Borbora added. “Assam is still the highest producer of Khasi Mandarins (orange) in northeast India… but these numbers are falling.”

To cope with the loss of oranges, farmers have started to look at their basket of other crops, particularly horticultural produce that has traditionally thrived in the hills. Most prominent among these are pineapples, ginger and other spices. A number of farmers are also turning to tea cultivation—the most important cash crop of Assam. In Deithor (Karbi Anglong), for example, Nelson said that farmers have found respite with tea cultivation. “With tea cultivation in 1 bigha of land, you can earn a profit of INR 30,000-40,000 (USD 442-589) annually,” he said. However tea growers in Assam are also worried as production is similarly falling due to high temperatures and lack of rain.

Farmers are also starting to use multi-cropping instead of mono-cropping in order to increase their chances of making a profit. John S., a farmer in the Dolmara area of Karbi Anglong, for instance, has started growing more pineapples and ginger on his land. “The orange trees are there but I am now focussing on increasing the other traditional varieties to make up for the loss from oranges,” he said. Diversification, experts say, is a key adaptation measure.

At the same time, scientists are working on new technologies to rejuvenate orange production. In the Tinsukia district of upper Assam — the highest mandarin orange producing district in the state where farmers are also shifting to tea cultivation — the Citrus Research Station provided some farmers with new, high-yielding varieties that could be grown in between the rows of tea bushes. “The result has been encouraging,” Borbora said.

The Assam Agricultural University also signed a Memorandum of Understanding with the Nagpur-based Central Citrus Research Institute (CCRI) last year to try and stop the overall decline of citrus production in northeast India. K. M. Bujarbarua, vice-chancellor of the university, underlined the need for a “massive research” push in this field, including offering technical guidance to farmers. Experts of CCRI have started to train people and develop more resilient plant varieties, according to Dharin Hazarika of the horticulture department in the Biswanath College of Agriculture — where a plot of land has been given to CCRI by AAU.

For farmers like Roben and Marshan, however, the focus is more on adaptation and survival. “I have not entirely given up on my orange orchard but if it comes to the question of survival, we are moving on to other crops for sustenance. The hills are blessed with a big fruit basket,” Marshan said, still hopeful for the future.

This article was written as part of IHCAP-CMS Media Fellowship Program. It was first published in the Third Pole.