Fluctuating weather patterns have started impacting the famous litchi orchards of Muzaffarpur in Bihar, resulting in poor harvests and decreased sweetness of the fruit that is impacting the livelihoods of thousands of farmers 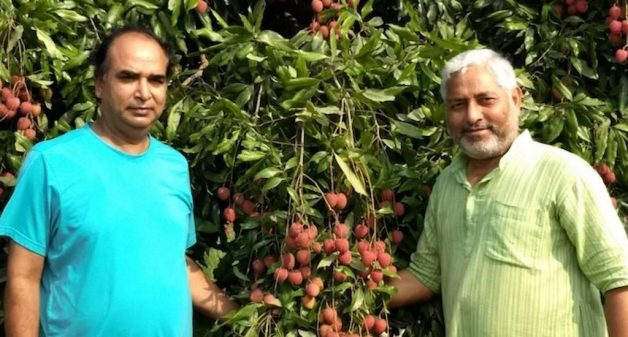 Vishal Nath (right), director of National Research Centre on Litchi, with a colleague at an orchard (Photo by Mohd Imran Khan)

When litchi trees flowered well in March, farmers Ravinder Singh and Surender Yadav anticipated that the fruit harvest would be good. By the second week of June, they were bitterly disappointed, blaming adverse weather for the poor quality of harvest.

Singh and Yadav, like dozens of other litchi-growing farmers in Muzaffarpur district in the eastern province of Bihar, are getting increasing worried over unpredictable weather that results in the poor harvest of litchi. Muzafffarpur’s Shahi Litchi, an Indian variety of soapberry, is famous for its size, unique flavor, aroma and
taste. Litchi is a major crop in this area, but farmers in Muzaffarpur and neighboring districts have no idea how to deal with the situation.

The quality of litchi was hit hard by unexpected variations of temperatures in April and May, according to farmers and scientists. In the past 3-4 years, instead of the usual high temperature and dry weather, there was a lot of moisture in the air in both the months. Litchi’s size has been reduced and its sweetness has also decreased due to variations in temperatures, farmers say. Litchi fruits require low humidity for healthy growth.

VIshal Nath, director of National Research Centre on Litchi (NRCL) in Muzaffarpur, said that climate change could be a cause that affects different crops and fruits. “Litchi could be one of the fruits (affected by it) but there is a lack of scientific data to prove how much climate change has affected it,” he said. “Till date, we have not done any scientific study. We lack quantify information and analysis with respect to different parameters of climate change and its affect on fruit size and quality of litchi.”

Nath said litchi cultivation is specific to its soil and climatic preferences. At present, the area of this fruit under cultivation is 84,000 hectares across the country and its production is 594,000 tonnes. The productivity of litchi is better in India in comparison with its native country China, but still a wide gap exists between present productivity level (7-8 tonnes per ha) and realizable potential productivity (14-15 tonnes per ha), he said.

Litchi contributes significantly to the growers’ economy in Bihar, West Bengal, Assam and Jharkhand that accounts for 78% of the total production in the country. Bihar produces 40% of the litchi grown in the country on 38% of the area.

Abdus Sattar, a climate change expert at the Rajendra Prasad Central Agricultural University (RPCAU) at Pusa in Samastipur district, said more than any other summer fruit, litchi has been affected by climatic variations. “In the past couple of years, there has been a trend of increasing rainfall and thunderstorm in the month of May. It affects the growth of litchi. Earlier, the months of April and May used to be very dry because of very low rainfall. Prevalence of dry westerly winds would mean low humidity during daytime,” said Sattar. “When litchi matures, it requires low humidity and occasional rain for proper growth and taste.” 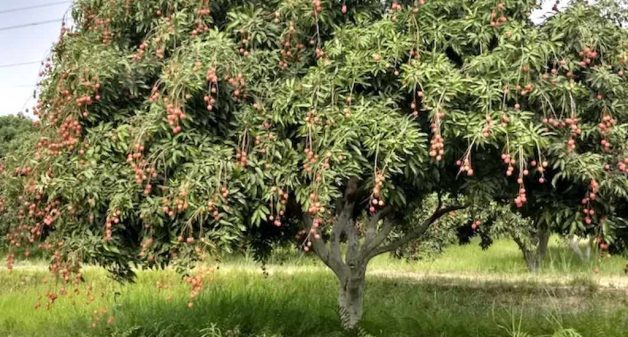 “One can say that climate change has started affecting litchi and it may pose more serious threats in coming years,” said Sattar. “I have concluded this on the basis of feedback from farmers, observation and field study.” Sattar admitted that so far there is no solid evidence available to prove how much litchi orchards have been hit by hit by climate change. “We have begun a scientific study on it,” he said.

Litchi is very sensitive to variations in temperature, rainfall and humidity. Farmers like Singh and Yadav said pest attacks have also increased in their orchards.

Sushil Pathak, professor of Agronomy at the Bihar Agriculture University (BAU) at Sabour in Bhagalpur district, said climate change might have affected the litchi harvests in the past few years. “There should be optimum temperature for the fruiting of litchi. After flowering, the temperature should rise. But that was missing this time,” he said. “We have analyzed information and feedback from litchi-growing farmers at different places and observed that climate change has affected the quality of litchi.”

Md. Feza Ahmad, a professor of Horticulture at BAU, said the impact of climate change is reflected in the quantity and quality of litchi as well as mango. Low temperatures have prevailed for longer periods that delay the maturity period by 7-8 days. Fruit sizes have also reduced due to low temperature and its abnormal increase in the last week of May and the first week of June. It exacerbated the ripening process that reduces the size, Ahmad said.

As much as 25% of the harvest was also damaged by infestation of red-blended caterpillar and fruit flies compared with last year due to low temperature in April and early May, Ahmad said. He added that repeated thunderstorms resulted in unripe litchi and mango falling from the trees.

Litchi growing farmers like Singh and Yadav said the extreme weather followed by hailstorms in 2015 prevented fruits from attaining optimum flesh. S.K. Purve, principal scientist at NRCL, recalled that the unprecedented heat few years ago played spoilsport by burning the skin of the fruit, which then was spoiled due to insect attacks.

According to him, the size of litchis in 2014 plucked from the trees was small compared with the previous year. “Extreme weather resulted in small fruits. They should weigh at least 35gm to 40gm instead of the 20gm. The fruit’s skin and flesh too remained fragile, as it split because of excessive heat, thereby getting infected by insects.”

Bhola Nath Jha, a litchi farmer, said that continuous bad weather has affected litchi cultivation. “We are facing a tough time to meet the demand for quality litchi from exporters, processors and the domestic market,” Jha said.