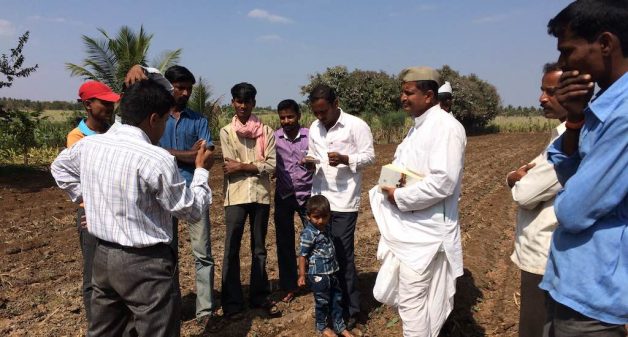 Like many other parts of India, Anantapur district in Andhra Pradesh has been suffering from one of the worst droughts ever in the past two years. “Drought is not new to our village, but I cannot remember a worse time than the last two summer months,” said K. Nageshwaramma of Diguvapalli village. “In 2016, I sowed my seeds in June and there was absolutely no rain till September. All I could do then was to watch the plants just wilt and die.”

Anantapur is the second driest district in the country. It receives an average annual rainfall of only 381 mm, second only to Jaisalmer in the Thar Desert in Rajasthan.

Even as the people of Anantapur were trying to survive one of the worst droughts in living memory, rains finally arrived in October last year. The initial delight led to another sombre experience, as the heavy rains led to flooding and even the death of a child. The district received its heaviest single-day rainfall in 15 years.

To deal with such extreme weather, many farmers in Anantapur as well as the rest of Andhra Pradesh are going back to farming as they used to before high-yield crop varieties, hybrid seeds, synthetic fertilisers and pesticides became the norm. They have found that crops grown the traditional way, with a little bit of agro-ecological innovation, have a better chance of survival in this errant climate.

The Indian farmer is probably the single-largest group in the country that is directly affected by the impacts of climate change. Despite rapid urbanisation, the country is still largely an agrarian society with more than 700 million people either directly or indirectly dependent on agriculture and allied sectors for their livelihood.

In 2008, a national action plan on climate change was formulated, followed by state level plans in subsequent years. These were meant to be blueprints to deal with the various issues that arise due to unpredictable weather. Apart from a few exceptions though, the Indian farmer is still largely left to his own devices to adapt to the effects of climate change.

“Climate change is definitely pushing farmers to go towards alternative cropping,” said Chukki Nanjundaswamy, working president of Karnataka State Farmers Association (KSFA) and coordinating member of Amritabhoomi, an agro-ecology school in Chamarajanagar, Karnataka. “In Karnataka, especially in areas like Mandya District, it is mostly the green revolution kind of farming. The last 60 years, it has been all about sugarcane, paddy etc. Now with severe droughts, dry farming that used to be done before is making a comeback and also alternative types of farming and crops such as millets and pulses that don’t need much water are being taken up.”

The smallholder and marginal farmers who constitute the majority of the farming community in India are the worst affected due to climate change. The agricultural census of 2010-11 found that operational holdings below four hectares constitute over 90% of all operational holdings. The average size of landholding in India has decreased as well, shrinking to 1.15 hectares in 2010-11, from 1.41 hectares in 1995-96, a decrease of 18%. 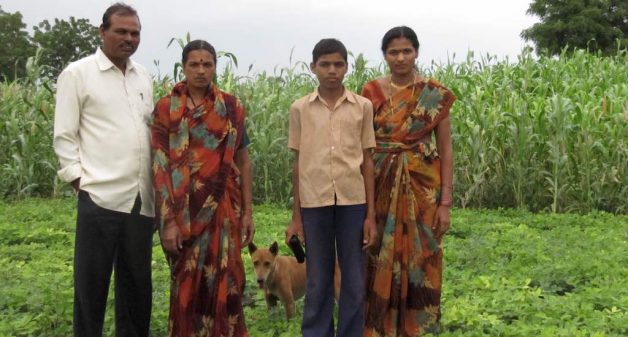 Rajshekar Nimbargi, a zero budget natural farmer in Bijapur, Karnataka along with his family (Photo by Ashlesha Khadse)

“I would say that evidence is showing that agro-ecology is absolutely the only way to go,” said Ashlesha Khadse, a member of Amritabhoomi. “The major cause of farmer suicides and the shift away from agriculture is climate change. They have no choice but to become migrant labourers because they cannot farm in such severe drought conditions that we see nowadays. Ecological farming methods are the only thing that work in such severe conditions and traditional, non-hybrid seeds are quite resilient against the vagaries of the climate.”

Back to their roots

Realising that traditional and agro-ecological methods of farming can be scaled up to adapt to climate change, a few states across the country have taken the lead and the results are showing already.

In Andhra Pradesh, 140,000 farmers, cultivating on about 60,000 hectares, have shifted to Zero Budget Natural Farming (ZBNF), with the state government being the driving force behind this change. ZBNF is a natural farming practice where it is believed that all the microbes and nutrients required for agriculture is available in the soil itself. No chemicals are used in this method of farming. Cow dung and urine are used as inoculants and jaggery is used to enrich the soil. State government authorities expect all six million farmers spread across its 13 districts to take up ZBNF by 2024.

“We have observed that both drought resilience and resilience to storms and cyclonic conditions are higher in ZBNF crops. Through crop cutting experiments we have also found that the yield is higher as well,” said Naveen Chand of the Rythu Sadhikara Samstha (RSS), a government of Andhra Pradesh initiative under which the ZBNF programme functions. “We’re also providing all our farmers training on how to practise ZBNF and Subhash Palekar, who is considered the guru of ZBNF, is a consultant to the state for this. Moving forward, with unpredictable weather being the norm, ZBNF is steadily proving to be the most effective solution for our farmers.”

While Andhra Pradesh is the only state in the country that is throwing its weight behind such a programme, there are farmer-led initiatives, especially in Karnataka, Maharashtra and Kerala, which have enabled a shift to agro-ecological farming methods such as ZBNF.

In Nagaland, the government has identified climate-resilient, traditional food crops that farmers can take up. The jhum or shifting cultivation system is also encouraged and the idea is to adapt to climate change by reinforcing the crop diversity that is part of the state’s agricultural practice. “In each village, they have more than 50 varieties of rice which they sow. By and large farmers are also practising mixed cropping as well and this has proved extremely effective, even when the rains are unpredictable,” said D.K. Chetri, joint director, State Agriculture Research Station (SARS), Mokukchung, Nagaland.

Under a project funded by the National Adaptation Fund for Climate Change, the state government is documenting its various rice and other crop varieties and has so far found an incredible 867 traditional land races (varieties) of rice. “Traditional rice and millet varieties are highly diverse in terms of pest resistance, yield and water requirement, thus making them ideal for the Naga farmers today,” Chetri said. “Also, the farmers already have tacit knowledge about this, it’s only that we have to encourage them to apply this knowledge instead of bringing in other systems from outside.”

“It is critical that farmers get equipped with knowledge to be able to adapt to climate change, it’s not only knowledge about specific practices but also going back to understanding other ecosystem processes,” said Anne Sophie Poisot, adviser, FAO. “In India, there is a wealth of agro-ecological experience and we think it’s a particularly well-adapted model. What is important is for the farmers to get the knowledge and support that they need now.”

Programmes such as ZBNF are attempting to do just this, with enormous effort to educate farmers and equip them with the knowledge and skills to farm in a resilient manner. In Sustaining Agriculture in the Era of Climate Change in India, published in 2009, G. V. Ramanjaneyulu and Kavitha Kuruganti had argued for diversity-based cropping to deal with climate change.

“I think our arguments still hold true today since currently prevalent agricultural paradigms are not sustainable,” said Kuruganti, now with the Alliance for Sustainable and Holistic Agriculture (ASHA). “Both in terms of what it will mean to micro-climate of the farm in terms of being able to withstand any risks, and extreme weather conditions, I think diversity is something that is the basis of this paradigm that we’re talking about.”

Despite an understanding of the need for this diversity, government policy is still largely an obstacle rather than an enabler for CSA. There is a lack of proper crop insurance mechanisms for multi-crop systems. Systems in India are geared towards promoting mono cropping and growing certain prevalent crops. As Kuruganti says, “If I want to grow millets, for instance, I won’t get bank credit with a good scale of finance for it but if I do the wrong kind of cropping, I’ll get at least INR 10,000 (USD 154) more on my Kisan Credit Card.”

With a lack of initiative at the policy level, the Indian farmer is as vulnerable today as (s)he has ever been to the vagaries of the climate. What Santosh Kittur, a ZBNF farmer in Belgaum, Karnataka, says encapsulates this. “It is impossible for the Indian farmer to be financially satisfied today,” Kittur said. “If the climate is good, you won’t get a good price, and when you’re getting a good price, production will be difficult.”

Kittur had left his job as an electrical engineer to get back to farming in his ancestral land. “Regardless of this though, I do feel proud to be practising clean farming today and I know I’m doing a good thing for me and for my children’s future.”

Sibi Arasu is a journalist based in Mysore, Karnataka. Views are personal.

Sibi Arasu is a journalist based in Mysore, Karnataka.