Despite global recognition, women painters of the Madhubani folk art form in Jitwarpur village have failed to escape the clutches of middlemen, who corner most of the profits. State initiatives could help stop the exploitation 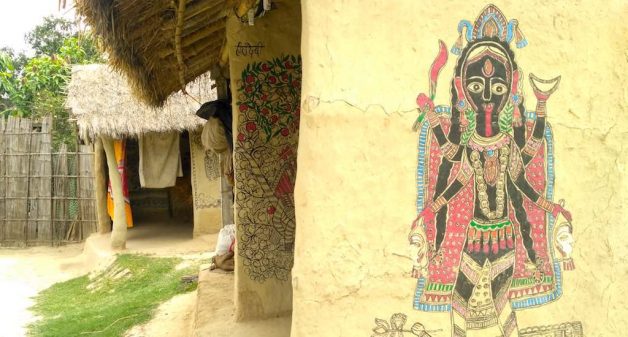 Lively Madhubani paintings are beautifying walls across the globe, but they are not colorful enough to brighten the lives of its artists. Known for its vibrant colors, Mithila painting, now known as Madhubani painting, is the visual folk art of the Mithila region of Bihar and Nepal, which has worldwide recognition.

What is less well known is that its artists, who have been excelling in this art for generations, are still not getting fair prices for their work. Jitwarpur village of Madhubani district of Bihar is the hub of Madhubani painters, but one can still see mud houses and poverty in most places here. The only thing attractive that people might find here are beautiful paintings on the walls of houses.

“When dadi (elder sister) was asked to make the first piece of Madhubani painting on paper in 1962, we sensed winds of change in our village, but who knew it would just be a phase and artists will always keep on struggling even after so much of talent,” Mithilesh Kumar Jha, grandson of the much-awarded late Sita Devi, who is still known for her earliest contributions in Madhubani paintings, told VillageSquare.in.  Sita Devi took this folk art out of walls and houses of the village to the exhibition halls around the world.

There has been a good rise in the number of artists inside and around the village, but they can barely speak Hindi or any other language except Maithili. Also, with the majority of artists being women, they don’t move out of the village for business and depend on the agents or middlemen to bring them work.

These middlemen are located in various parts of the state and have good contacts among customers, who would buy the paintings for a good price. These agents solely do the business of buying the paintings made on canvas, paper, cloth and apparel from local artists at a cheap price and sell it for higher rates. Sometimes, the prices they earn are more than 70% of what they pay to the artists.

As a result, artists complain that they do not get paid enough for their hard work, which reaches thousands of houses across and outside the country. They claim that the agents who take their paintings to sell outside are running the show by reaping the benefits. “We thought it would get us name and fame. That is why every resident of the village paints the folk art today,” Meera Devi, a resident of Jitwarpur village, told VillageSquare.in. “But the sole motive to earn food and clothes seems to fade away for us.” 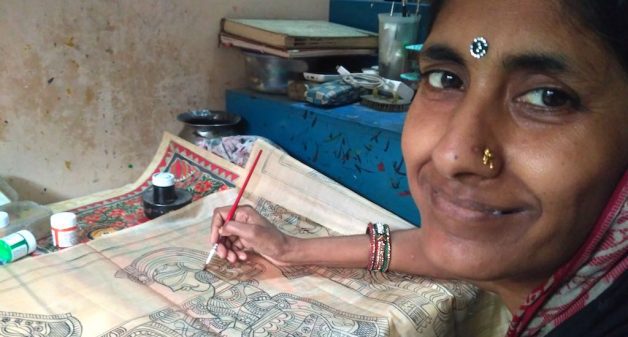 “Earlier, there used to be a limited number of artists with whom government officers contacted directly. But today, the only way to sell our artwork is through the middlemen, for which we have to wait really long. The only way out is to wait for the orders, which we get only if we are on good terms with the middlemen. Out of the total price they would sell our paintings for, we would get less than 60% of it, but we can’t oppose them since they are getting us the business, anyhow,” Meera said.

“I remember once my painting on a silk saree was selected by a showroom in Delhi for Rs 50,000, but they refused to buy it the moment they noticed my name written in the corner of the painting. As artists, we are not even supposed to let people know our names. We can’t write it on our artworks because if we do so, they (business agencies) fear the customers might approach us directly to get their material painted at a lower price and it would be a big loss to them,” Rupa Jha, another artist from the village, told VillageSquare.in.

What began as beautifying houses of Brahmin families, the art form now earns bread and butter to the Dalits and Kayasthas as well. Madhubani paintings originated with Brahmin women painting their house walls as a part of decoration during festivals and weddings. The ladies of Brahmin families knew the art form and would paint it mostly with the natural colors, extracted from leaves, flowers and fruits.

Once a government official visiting the village noticed a painting by a Brahmin woman, Sita Devi, and the word reached the then Prime Minister Indira Gandhi. Sita Devi was asked to paint more of them on paper, for which she got paid. This eventually resulted into a ray of hope for other residents of the village and they too showed interest to learn the art to earn a penny or two.

Women of other castes also started to learn the art form, and for the first time, they were supported by their men, for they knew it would help them feed the family at the time when Bihar was going through the massive drought.

Those were the days when untouchability and discrimination were at the peak. So some differences were maintained according to the upper caste (Brahmins and Kayasthas) of the village, which resulted in different styles of painting.

The Madhubani paintings had five distinctive styles now — Kohbar, Bharni, Katchni, Tantrik and Godna. The Brahmins and Kayasthas practiced Bharni and Katchni, respectively, while Tantrik and Godna were the styles of the lower castes. The Brahmins were confined to draw only mythological stories drawn from tales of Ramayana, Mahabharata and the like. On the other hand, the lower castes would paint day-to-day activities and rituals in their artworks.

But things changed with the time passed by. The upper castes also started making Godna and the depressed castes showed their interest in painting mythological figures. They were no more made to strictly adhere to their confined art forms, and thus, the Madhubani Painting in its globalized form became a strong medium to break caste barriers apart, amongst the artists at least. This is the reason that today no one can judge the caste of an artist by her paintings.

The early Madhubani paintings were not meant for commercial purposes at all. Be it Kohbar made during the weddings or Alpana on the floor during festivals, women would paint it traditionally only as a part of the ritual.

But the moment men of the village realized that it could be a good source of income, they also started to indulge themselves in painting, as it seemed to them an easier way to earn, which eventually turned out to be a negative for the women. Once again, women were suppressed from working because who would do the household chores and look after the children.

But this did not stop the female artists and they started excelling in both their duties. However, the ratio of women artists has fallen. There are trained men in the market. There are people who are making contemporary Madhubani paintings as well. Unlike the original, traditional art, which is drawn completely freehand without any type of equipment, people are using scales, blocks and other things for refined results, which is also a challenge for the women artists of the village.

Jitwarpur village has a population of about 4,000, out of which 70% of families depend on this art form for a livelihood. Out of those 70%, some 60% are not even able to write their names. This is why artists are not capable of starting their online businesses.

They are technologically backward and feel safe only at home and don’t wish to move out even for the sake of a better business, but wish if the government could offer them a platform around their village, from where they could do direct business and learn the tactics of online business.

“Every year different types of exhibitions take place across the country but we cannot afford the entry fee, travel and accommodation. Only if the government could arrange some kind of office in our state from where we would be able to exhibit and sell directly, or provide separate groups of artists with the exhibition passes for national exhibitions, we could gear up for independent work,” Vibha Devi told VillageSquare.in. “Otherwise our kids would also live the same lives as we do, without any improvement.”