Workers of closed tea gardens struggle to make a living 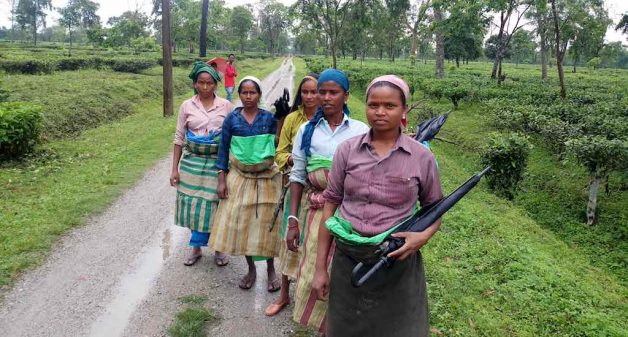 Sali Ram finds it difficult to hide his poverty under his tattered clothes. Clearly undernourished, the 52-year-old worker at the closed Nirpania tea garden in Birpara of Alipurduar district in West Bengal, around 700 km from state capital Kolkata, is the sole breadwinner of his family of five, including three small children.

It has been nearly 18 years since Nirpania stopped operations but about 500 of its workers are still getting work from a new breed of local contractors who have virtually gained controlled of the closed tea garden. Sali Ram earns a paltry Rs 70 after toiling for six hours every day under a blazing sun. Even that paltry wage is paid only after 15 days of work.

His earning is far less than Rs 159 (including Rs 9 for rations) that is paid to workers of functional tea gardens. Needless to mention, benefits like bonus, provident fund, gratuity and health facilities are distant dreams for him and his colleagues.

The local contractors have taken exploitation of workers to a completely new level by taking advantage of their extreme poverty that has been ruling the picturesque tea garden area for years now. “The tea workers of operational gardens are fighting for an increase in wages even though they get double the amount than us along with other benefits,” Sali Ram told VillageSquare.in. “We get a meager amount but still we work to fend off death waiting to devour us by sending starvation inside our houses. We manage to put some food inside the hungry bellies of our children by earning a nominal amount.”

The condition of Nirpania tea garden is perhaps the worst among the 30-32 tea gardens that are defunct in the Alipurduar, Darjeeling, Jalpaiguri and Uttar Dinajpur districts of West Bengal. The staff quarters are shabby with no toilets. Villagers including women have no alternative but to defecate in the open. Elephants often intrude in the residential areas and destroy their shanties.

There are almost no health facilities, as the nearest hospital is in Birpara town around 7-8 km away, and the lack of transportation facilities often puts patient’s life at risk. The chances of survival of a critical patient are slim when the two nearby rivers are in spate during the monsoons. Children risk their lives daily by crossing a nearby railway bridge to go to schools during heavy showers. 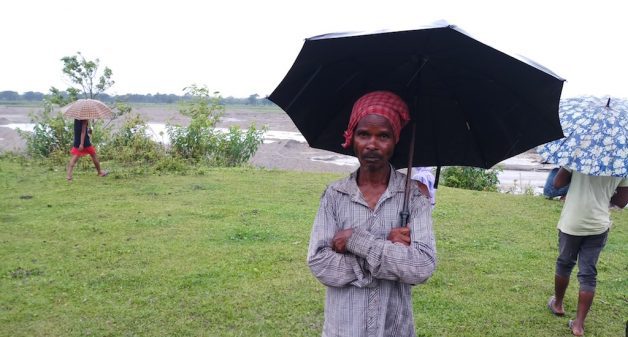 Nirpania seems to be a cursed place, with even nature trying to engulf it. The two rivers — Khanabharti and Sukha — surrounding the village has been eroding their banks and threatening to engulf the village with each passing day.

“It would all be over within a few years when the rivers would not only devour the remaining tea gardens but also our lives,” Birsa Oraon, 70, a retired tea garden worker told VillageSquare.in, pointing to the river that was far away some years ago. “We have been already been forgotten by our own people, as none from the administration has come over the years to know about our plight.”

Sapan Samjar Tati (36), a tea garden worker at the closed Dheklapara tea estate, a few kilometers away from Nirpania, rues that the shut tea gardens have become fertile grounds of exploitation, with all the rules being tossed into the air.

“Some locals who have money in their pockets have become contractors, selling the leaves to processing units. They pay a paltry amount ranging from Rs 50-70 to workers without any additional statutory benefits that workers of open tea gardens get. The workers also agree to work because they are starved,” he told VillageSquare.in. “Some of the owners of running tea gardens are also hands-in-glove with these contractors and buy leaves at low prices, so the closure benefits them too at the cost of exploiting the laborers who work for peanuts.”

Several workers of Bundapani tea estate, another closed garden since 2012, have taken to stone crushing and collecting stone chips from the riverbed to ward off poverty, but here too the exploitation continues unabated. The workers are paid Rs 75 per day for collecting 12 heavy baskets of stones from the river, with each weighing a minimum of 25-30 kg.

In 2014, starvation deaths were reported from Bundapani, Dheklapara and other closed tea estates of northern West Bengal due to severe malnutrition. The workers across the tea gardens are tribal people who had migrated generations ago from Bihar, Jharkhand, Chhattisgarh and Madhya Pradesh.

There are concerns that owners of the closed tea gardens are raising their voices against the illegal plucking being carried out by local contractors. Zia-Ul-Alam convener of Joint forum, a grouping of 29 trade unions in West Bengal, says that it is difficult to stop such illegal practices.

“There is a racket running in the closed tea gardens. Most of the tea gardens owners are loan defaulters and their property is under liquidation. They are the real culprits who have siphoned the money from the tea gardens to real estate and other businesses over the years spelling dooms for the industry,” he told VillageSquare.in. “Over Rs 300 crore gratuities of the garden workers are still pending with the owners. The contractors have emerged as a big danger for the industry.”

The trade union affiliated to the ruling party in West Bengal says it is not aware of any malpractice. “We are already demanding minimum wages to be fixed at Rs 200 per day. We sternly condemn if workers are paid such low wages,” said Arup Ratan Ghosh, Darjeeling district president of Indian National Trinamool Trade Union Congress (INTTUC). “We will definitely agitate if such things come to our notice.”

On top of these woes, the scepters of migration and trafficking stalk the idyllic tea gardens, “The wages paid in Bengal are comparatively low than what is being given to workers in southern states. Workers have been already moving out for better wages for over the years, resulting in shortage of workers in the operational tea gardens. The Minimum Wages Act 1948 and The Plantations Labour Act, 1951 are still to be implemented properly,” pointed out Abhijit Mazumdar, President of Terrai Sangrami Chai Mazdur Union and son of communist revolutionary Charu Mazumdar. 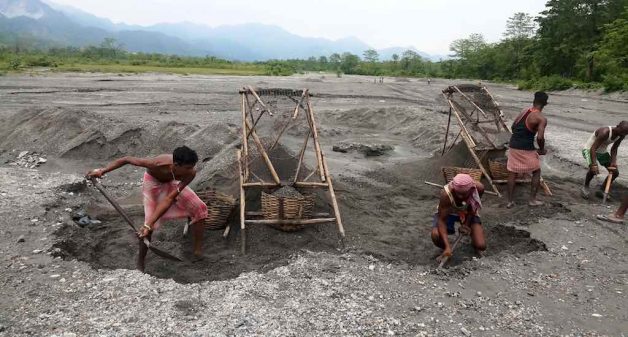 Biswajit Barman, who is the North Bengal in-charge of Shakti Vahini, a Delhi-based non-profit working for anti-trafficking, estimates that over 400 girls are trafficked every year from tea gardens, mostly those that have stopped functioning.

“The traffickers obviously target the shut tea gardens where hunger and poverty are high compared to functional, which are getting some educational and health facilities and also ration at subsidized rates,” Barman told VillageSquare.in. “They (traffickers) lure the prospective victims with rosy dreams of better life and good income, but sell them to brothels, mainly in Delhi and other big cities.”

He, however, pointed out that the real problem is reverse trafficking even after the girls are rescued. “We manage to return them to their houses after they are rescued but they somehow fail to get themselves adjusted to the poor economic condition of their families,” he said. “The girls feel disgusted with the poverty and again go back to the flesh trade. The entire exercise then turns futile.”

Ashutosh Shaktan, a Delhi-based documentary photographer who spent three months in the Doars in 2015 while doing a project titled Tea, the Ugly Beverage, was so moved by the plight of the workers of Bundapani that he decided to do something for them.

“It was an unforgettable experience of my life. I noticed how people were living in sub-human conditions. They had no medical and educational facilities. After completing my project, I decided to payback in some ways so I managed to arrange 1,200 books for the kids through donations,” he said.

As the black clouds cover the sky, skeletal figures are seen returning back to their shanties to fill their bellies and muster some energy to defeat death for another day. There seems little hope left for these forgotten people.