Ending open defecation in India’s villages cannot be the sole responsibility of the government. The heads of rural households also need to made responsible to ensure that women have access to safe sanitation 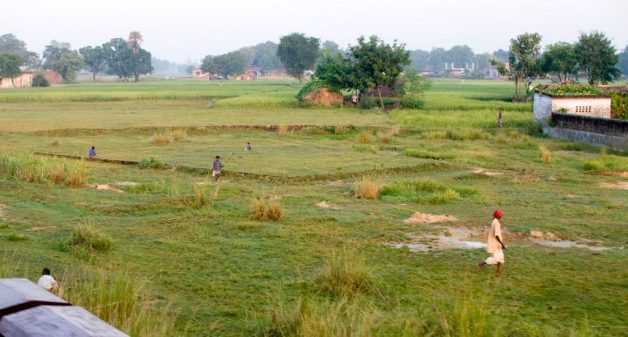 Talking to a group of organized village women is often a revelation. They proudly narrate how their self-help group (SHG) has enabled them to earn an additional income by engaging in small businesses. There is some discussion as to how the income needs to be saved from their husbands so that the money does not get spent in liquor. You compliment them on their achievement.

You then ask if they have a toilet at home. No one has. You gesture towards a young pregnant woman and a daughter-in-law of one of the SHG members, and ask if she also goes out to defecate in the open? Yes, she does.

The village is on the periphery of a jungle and the region is known for infestation of poisonous kraits. You ask the older woman if she recognizes that her grandchild is growing in the young lady’s womb and if she slips in the mud and falls, there might be an unfortunate accident.

The woman responds by saying that she is helpless as the government has not built toilets here and state subsidy is not made available. When you confront her by asking if now with her success she does not have enough money to build a toilet, she meekly responds: “True, but we never have thought of it like this. We always thought that the government will build it for us.”

That is the point. Even when they have money, many villagers do not think about it. Open defecation has been an established pattern of life in a very large number of Indian villages. I remember that in the mid-sixties as a child when I visited my ancestral village, I had to follow this practice, as there simply were no latrines in the whole village.

During the course of my career, I have been to quite a few villages and lived there for many nights. Till almost the dawn of the new century, this practice of having to go out in the field at dusk or in the dark was quite common in most villages that I stayed. In all these situations, I was a visitor for a short time.

The subject of sanitation evoked loud guffaws with ribald comments, derision and ridicule, or at best, a sort of grudging acknowledgement of its importance even till about a decade ago. We were only too eager to find excuses for open field defecation — water is a problem and how do people use latrines if there is no water; the system of closed drainages obtains only in cities; people are too poor to afford own toilet and so on.

What is far worse is that ever since the Swachh Bharat Mission has been launched, many of our development experts are busy picking holes in the way the system is designed and the way implementation is happening. Usual statements about shoddy work by contractors, corruption, latrines being used to store fodder, fake reporting, etc., are being trumpeted. And they are predicting reasons why that mission is going to fail. It is as though there is a barely hidden glee in the possible failure of this mission.

I have misgivings with this attitude. In the first place, I find it strange that we assume that it is the state’s responsibility to create all these sanitation facilities and not simply mandate, compel, police and enforce compliance from every one in a strict manner. Possibly the state could have restricted itself to creating a massive network of Sulabh-like shared facilities rather than insisting on every family having its own latrine. Then every one would have talked about caste-ridden communities and the perpetuation of forced task of cleaning of community toilets by a set of families.

But in any discussion we do not seem to recognize or emphasize that providing sanitation to family members is the responsibility primarily of the head of that household. A large number of these very intellectuals will vociferously agree that almost a third of rural incomes get spent on liquor or gambling or some such vice. But none of us seriously think that it is both necessary and important to create an ethos that makes every man take responsibility for his family.

Our research has pointed out the embarrassing absence of secure and private bathing spaces for rural women and the effect it has on their dignity, health and hygiene. If one were therefore to suggest that the Swachh Bharat Mission should be extended to cover bathrooms as well, urban intellectuals will possibly make a huge uproar. See: Cost of women bathing in the open

But, honestly, ponder on this: If you think you are a man who can be respected, should you not ensure that women in your household can carry out these daily chores in a safe and clean place? Is this not a part of your self-respect?

I see that most of us men in the middle class, the so-called educated and urban people, have this sense of ownership and responsibility towards their families. I do not see urban educated men feeling comfortable with the thought that come each morning their wives or their pregnant daughters-in-law will go trudging in the dark. We often end up paying about a third of our incomes in house rent. Yet we do not grudge the expense nor consider it unwarranted. Why do we not consider it important to pass on the same values to our rural brothers?

We need to collectively make concerted efforts to reverse and obliterate this culture of shirking responsibility and continuing the culture of filth. We have to assert that every man is responsible for his home, that he must exert own efforts and spend his money to make life safe, dignified and clean for his family.

We need to do it without picking holes in any effort whatsoever that proceeds in the direction of elimination of the legitimacy of open defecation. Each scheme will have its own set of defects and nothing whatever is done in a perfect manner. But to cite faults of the scheme to justify continuance of a filthy culture is rank irresponsibility.

I think it is not out of place to suggest that as the state has proved its credentials by investing huge resources in helping people create sanitation structures, the state would be justified in creating a system of regulation that penalizes open defecation.

Rather than catching small children and helpless women, the penalty must accrue to the heads of their respective households. And the level of penalty must rise progressively. We cannot mentally or in reality wallow in filth forever. The culture of filth has got to be reversed and eliminated.