At a time when sexual abuse of women in a Muzaffarpur shelter for the homeless has roiled the nation’s conscience, women farmers in the district shine a beacon for empowerment by growing and selling rice saplings 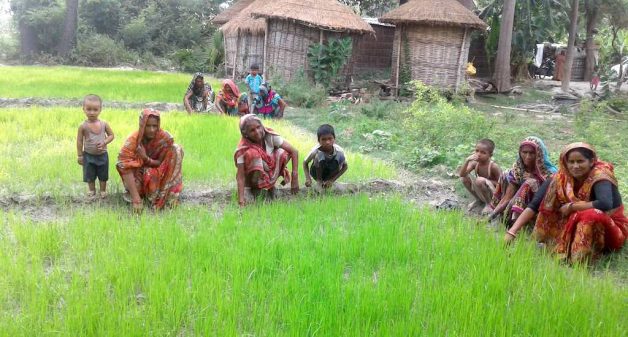 Sumitra Devi and Manju Devi are women farmers with a difference. They are raising rice nurseries that are part of paddy sapling bank, locally known as Dhan Bichra Bank. It is an innovative initiative by women farmers that has become a source of their livelihood and brought a change in their lives.

Sumitra and Manju were ordinary housewives till three years ago. They used to work in the fields occasionally without any recognition, but now are running and managing the paddy sapling bank. They are selling rice saplings from their nurseries to small and marginal farmers and earning a decent livelihood.

They are not alone. There are hundreds of such women farmers who are engaged in raising paddy nurseries and selling saplings in dozen of villages in Muzaffarpur district. These women use system of root intensification, popularly known as the SRI method, a scientific technique to cultivate paddy saplings on time, to sell for transplantation that helps farmers, who get readymade paddy saplings without any risk.

In a different light

Such an initiative by women farmers show Muzaffarpur in a different light at a time when reports of sexual abuse of women at a shelter for the homeless in the district town has shaken the country’s conscience. The tale of empowerment is a counterpoint to the shameless exploitation of homeless women in different parts of the country.

The SRI method of rice cultivation has been successfully practiced by thousands of farmers to boost yields. “In the first year, I earned Rs 2,900 in 2015 by selling saplings to farmers after we started paddy sapling bank,” Sumitra, a resident of Harpur panchayat under Bandara administrative block, told VillageSquare.in. “It motivated other women, who joined me and started raising paddy nurseries in their small patches of land. Now, there are hundreds of women associated with paddy sapling bank in Muzaffarpur.”

She was the first woman in her village to stand on her feet and is known as a model woman farmer who is leading a group that manages the paddy sapling bank. Sumitra said her success as woman farmer encouraged and inspired other women in the village to start paddy nurseries of different sizes as per availability of land. “Paddy sapling bank was started by me in 2015. Initially, a handful of women joined me, but now their number increased in view of the benefits.”

Manju, a resident of Chak Ibrahim village under Saraiya administrative block, said they opted to raise paddy nursery as it helped them in paddy cultivation. “By doing this, we have made our new identity and are also making some money,” she said.

Unlike Manju, Rekha Devi of Amaitha village and Meneka Devi of Biseshar Patti village in Sarayia block have been raising paddy nurseries for selling only. “This time I have raised a paddy nursery in 4 katha of land and sold saplings of nearly 3 katha,” Manju told VillageSquare.in. Similarly, Meneka, who raised a nursery in 3 katha of land, sold saplings of over 2 katha. “I will earn more than expected because demand of paddy saplings for transplantation is high,” she said.

These women farmers’ exposure to outside of the four walls of their homes has improved their status at the community level. They have increased self-confidence by being recognized as a contributing farmer. “At last, our contribution to agriculture is accepted and recognized, thanks to paddy sapling nurseries,” Rekha said.

According to the women, with the successful paddy sapling bank, they have also started raising vegetables nurseries, which are also in high demand. Traditionally, raising paddy nurseries have been viewed as a male-dominated sector in agriculture. But women farmers have changed it in Muzaffarpur.

Raising a paddy nursery during monsoon is common in rural areas prior to the start of much awaited Kharif season. But this year, farmers have been facing a difficult task in view of poor rainfall. Some of them are using diesel pumps, others electric bore wells and there are farmers working hard by irrigating their nurseries manually with help of hand pumps or wells.

Ramesh Mahto, a marginal farmer of Arar Lakhmipur village, admitted that paddy nurseries are not in good shape for want of water. Due to scanty rainfall, the land is dry, there is no facility of irrigation and the underground water table has depleted. “Only those farmers who have managed diesel pumps or other means of access to water sources are able to maintain the nurseries,” Mahto told VillageSquare.in.

Chunnu Kumar, a skill extension worker of Jeevika in Saraiya block, said more than 800 women farmers in different groups are associated with the paddy sapling bank. “In our block, these women farmers are doing well by preparing paddy seedlings and selling to co-villagers,” he said.

He said these women farmers belonging to self-help groups (SHGs) are associated with village level organizations were trained by experts to provide them latest know-how to raise paddy saplings. The women farmers are using local varieties as well as hybrid varieties of seeds to raise the raising nurseries. They go for seed treatment for local variety of seeds. “Their paddy nurseries are organic and they hardly use chemical fertilizers,” he told VillageSquare.in.

Sanjay Yadav, a resident of Muhammadpur Chak village, whose wife Gita Devi is a leading woman farmer associated with the paddy sapling bank, said that seed treatment and SRI technique have helped them more than anything. “Raising paddy nurseries by using SRI method helped these women. Unlike the traditional method, SRI method is cost-effective, saves time as well as survive in less water,” he said.

Sanjay said a paddy nursery in one katha land sold for Rs 2,000 and a women farmer could earn a profit of Rs 700 to Rs 800. “First we prepare bed for nursery by deep ploughing, followed by leveling. After that we put seeds treated with organic method and wet with water. Initially, for two to three days, the bed is covered by hay and after the paddy germinates, we remove it and seedlings take a few days to grow,” Gita said.

The success of the paddy sapling banks, a first of its kind, has shown that women are no more lagging behind to prove their presence to make a difference in agriculture in rural Bihar.

Kaushalender Kumar, agriculture manager of Jeevika, the state government’s rural livelihoods program, said the paddy sapling bank by women’s group is a hit in several villages in flood-prone Muzaffarpur. In last three years, a large number of women have joined the paddy sapling bank to earn a livelihood. This has empowered them in Saraiya, Kurhani, Sahebganj, and Bandra administrative blocks in the district.

Kumar, who work in close association with women farmers, said they have adopted Srividhi, as this program is called, because it requires less water and gives two to three times the yield compared with traditional cultivation methods. Srividhi aims to stimulate the root system of plants rather than trying to increase yields in the conventional way by using improved seeds and synthetic fertilizers.

According to the SRI International Network and Resources Center at Cornell University, an estimated 10 million rice farmers in 60 countries have adopted SRI. In impoverished Bihar, more than 335,000 hectares of rice are grown using SRI methods.

Agriculture is the backbone of Bihar’s economy, employing 81% of the workforce and generating nearly 42% of the state’s domestic product, according to the state government’s figures. About 76% of Bihar’s population is dependent on agriculture for livelihood.