An academy in Pune district of Maharashtra has boosted the confidence of tribal students, and helped them dream beyond their textbooks and hamlets by giving them practical exposure to science 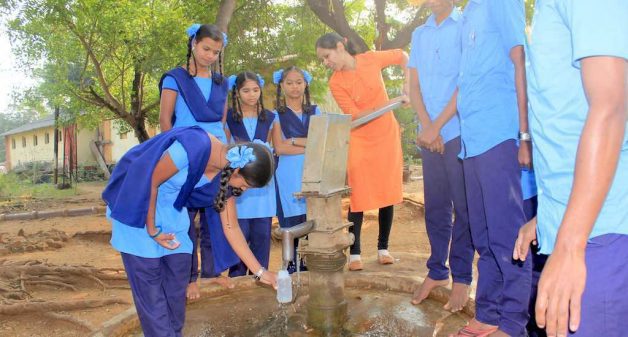 As a class X student, Snehal Adsul wrote an essay on diabetes and was selected to apprentice at the laboratory of the Moving Academy of Medicine and Biomedicine (MAMB) in Pune. It was a different experience, working on a project at the laboratory, and screening people for chronic diseases.

During the fortnight-long experience at the laboratory, Adsul learned more of the subject. But her main takeaway was the confidence that she, who came from a remote village, had what it took to succeed in a competitive world. Adsul is now a 24-year-old Inspector in Maharashtra’s Goods and Services Tax (GST) department in Pune.

Adsul’s journey began from Parinche village in the drought-prone Purandar administrative block near Pune. She now holds a bachelor’s degree in computer engineering and plans to take the Maharashtra Public Service Commission exam. “I want to join the administrative service because I want to serve the people,” she told VillageSquare.in.

Knowing his passion for physics, his teachers encouraged him. “When I was in class XII, my school principal suggested that I take part in an exhibition called Little Scientists organized by MAMB,” he told VillageSquare.in. “ It was a life-changing experience and it brought me to Pune.”

Damapurkar thought it strange that MAMB working in biomedicine chose him, knowing his interest in physics. He got to work in a project on thalassemia in the Raigad area of Maharashtra. “We took blood samples, checked the hemoglobin, etc.,” he said.

During the work, guided by Prakash Pawar, program director of MAMB, he decided to study mathematics. Though not in his core field of interest, the experience led him to come up with new ideas and to work on a project on quantum computing alongside his master’s.

Practical science experiments to be carried out at the laboratory are often neglected, especially in rural areas. MAMB runs science popularization programs targeting students from class VII to class XII. Choosing to work within the curriculum, MAMB staff often takes lab equipment to remote areas and encourage students to do the experiments.

While MAMB works in villages across Maharashtra, its focus in on the tribal students in the areas of Nashik, Dahanu and Jawhar. Since its focus is on biology and medicine, MAMB uses its access to the students to collect data and make the young people agents of change. “We light a fire in the minds of the students,” M.G. Deo, the founder-director of MAMB, told VillageSquare.in. 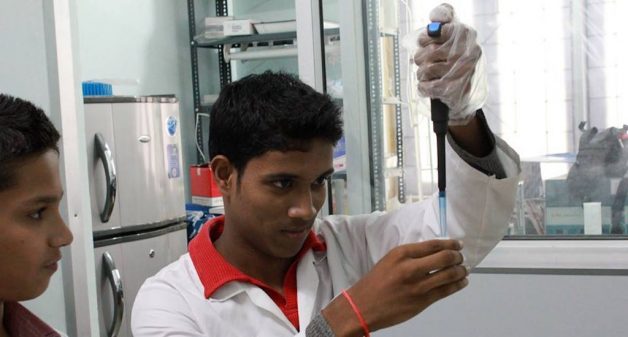 Students need to learn early, between age 10 and 12, that everything that happens has a reason and understand the why of a theory. They need textbooks, but using their hands and doing experiments, is an even greater need. This need is often left unaddressed due to various reasons. As a result, students learn by rote without understanding.

Adsul and Damapurkar are just two examples of the change that can happen if there is greater encouragement for laboratory work. MAMB facilitates this by carrying equipment from Pune to the schools in the tribal areas. MAMB helps students in classes IX and X carry out simple experiments. The equipment left behind in school enables the students to try bio-related experiments.

“We want the children to come and make use of the equipment,” Prakash Pawar, program director at MAMB, told VillageSquare.in. “That is the only way to get them to start asking questions and get some answers.”

Another unique project by MAMB is to encourage peer learning by first teaching interested class VII and VIII students. As they progress, the benefits of peer learning manifest in different ways.

As with Adsul, select class X students get to write a report on a given topic which, if chosen, allows the student to work at MAMB’s laboratory. “Students are also able to gather data needed for targeted health programs,” Dr. Rita Mulherkar, vice-president and treasurer at MAMB, told VillageSquare.in.

The decade-long work of MAMB in select tribal belts has led to school children testing water and soil quality of their respective neighborhoods. Students tested samples from decade-old bore wells in their area and found the water to be very hard and not chlorinated.

The students took the sample and the results to the gram panchayat. The panchayat found out that the person designated to chlorinate the water had not been doing it. “When a child from their own area shows test results, it gets the village charged and ready to make changes,” said Dr. Mulherkar.

“Even if two out of every 100 students that we train carries it forward, there will be a transformation,” Dr. Deo told VillageSquare.in. Adsul and Damapurkar are proof that such a transformation is possible.

Gouri Agtey Athale is a Pune-based journalist. Views are personal.

Preference for boys disturbs expectant mothers during the very fertility rituals that are meant to bless them, affecting their psyche, besides resulting in low sex ratio and inferior status of women

Free homestead land given by the Odisha government to single women, and housing funds through Pradhan Mantri Awaas Yojana – Gramin, has enabled single women to live independently with dignity (Photo by Manish Kumar)

The Odisha government’s free allocation of land, combined with the central government’s housing funds, have enabled single women in rural areas to build houses for themselves