Agriculture needs science and technology. However, there are certain rural aspects that need to be preserved, not only for the sake of environment and health, but also for the welfare of the rural community.

Many social enterprises are working towards the overall development of villages, reducing the migration of rural youth to cities, besides improving the soil, water and other resources.

Bengaluru-based Team Desi Milk (TDM) was launched in 2012, with the aim of contributing to such overall development. It has been promoting native cattle among farmers and sale of desi (indigenous) milk to urban consumers, in a rural-urban cooperative movement.

TDM, a wing of Seva Trust, is an evolving model of sustainable urban participation in rural economy. Their focus is on promoting organic farming practices, by essentially re-integrating animal husbandry and cultivation methods.

“Encouraging organic farming and enhanced animal care is part of societal care, an important pillar of sustainability,” Titus Sequeira of Seva Trust told VillageSquare.in. Bringing back the traditional interdependent practice of agriculture and animal husbandry, farmers can lead self-sustaining and healthy lives. A part of this effort is the integration of desi cattle.

“We aim to create healthier inhabitants in villages and cities by blending urban and rural economies, and improving the environment by utilizing science and technology in the right combination,” Madhava Hebbar of TDM told VillageSquare.in.

Milk from the native breed (Bos indicus) is of A2 variety, with the best Beta Casein protein. It contains 22 soluble minerals; A1 milk from the introduced breeds (Bos taurus) has just six known minerals.

A2 milk is non-allergic while A1 milk causes allergies and intolerance in many children. A1 milk disintegrates in three hours, while A2 milk stays good for seven hours. A2 milk need not be skimmed, as the fat is digestible, while A1 milk needs to be. 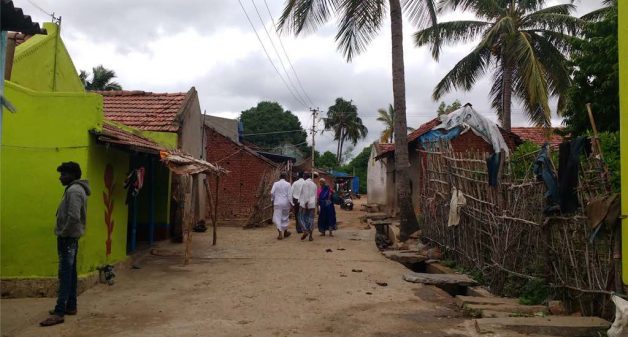 While these are some of the direct health benefits of desi cows’ milk, there are other benefits in rearing them. Native cows are healthier, need less attention, are more disease resistant and are bred naturally. Hybrids are bred through artificial insemination, injected with medicines and hormones and are not suited to the local climatic conditions, requiring a lot of maintenance.

With the economic and health benefits in their favor, many farmers switched to rearing desi cows. Farmer Shivaraju of Kadushivanahalli village grows ragi, corn and mulberry in his seven acres of land. “Earlier I had Jersey cows that needed a lot of investment and care,” Shivaraju told VillageSquare.in. When they died of disease, he bought five desi cows. “I’m convinced that they are best suited for our conditions.”

Hallikar is the most commonly reared native cattle in the Kanakapura and Ramanagara districts where TDM is active. Some rear Malnad Gidda, a dwarf variety native to the Malenadu region of Karnataka. Some farmers rear native breed bulls too, using them for reproduction and for farming during certain seasons.

The farmers admit that the yield from native cows is less than that of hybrids. But the cost of maintenance is much less. They are free-range cattle and hence the cost that the farmers spend on fodder and feed is less. Desi cows feed on simple local fodder, while the others need special formulations.

Native cows yield consistently good milk, for more number of years. The dung and urine of native cows are more suitable as manure for organic farming, as they contain more beneficial microorganisms and earthworms thrive on them. Thus the farmers save on buying pesticides and manure.

“I don’t spend much on their maintenance, fodder, and also on fertilizer for my farms,” Shivaraju told VillageSquare.in. “My family of five leads a comfortable life and I am able to educate my children well.”

Girish of Kadushivanahalli rears five cows and a bull, while pursuing his college education. “Many farmers use my bull as a stud and I earn a surplus of Rs 10,000 from the bull,” Girish told VillageSquare.in.

There are 24 collectives covering nearly 430 families consisting of 4,800 members spread across 26 villages in Kanakapura, Sathanuru, Sangama, MM Hills, Chamarajanagar and Kollegal regions. These regions have the highest population of native cows – around 3.2 lakhs – in Karnataka. 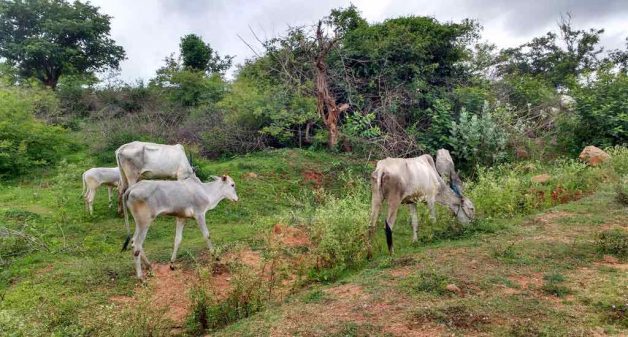 Till recently, TDM collected the milk from farmers, boiled and without further processing sold it in the nearby city of Bengaluru. Presently Dabbaguli Basaweshwaraswamy Farmer Producer Company Ltd distributes the milk.

With National Bank for Agriculture and Rural Development (NABARD) providing working capital, the farmers became shareholders of the producer company by paying Rs 1,000 each.

“Everyday morning we collect milk from farmers in 26 villages, boil it at the milk processing center in Bijjahalli, chill it and pack in half-a-liter and one liter sachets,” Mahesh, who works at the milk collection center, told VillageSquare.in.

From Bijjahalli, the packaged milk reaches the TDM office in Bengaluru, about 1.5 hours of travel time away. Volunteers and TDM employees take up door-to-door delivery to customers. Some sachets are also retailed at stores selling organic products.

Farmers ensure quality of milk by using low-cost tools such as lactometers and sterilized cans.

Farmers earn more for the A2 milk from native cows, as TDM pays them Rs 45 per liter. Government dairies pay Rs 24 per liter. Farmer Shivaraju said that he could buy many household items, after he started selling A2 milk.

“With the income from the three Hallikar cows, I could buy two more cows,” Baby of Kadushivanahalli told VillageSquare.in. “The financial status of our family has certainly improved.”

The milk is retailed at Rs 80 per liter. According to Siddaraju of TDM, consumers do not mind paying double the usual retail price, because of the health benefits. “I buy A2 milk as it helps keep the native breed alive and the cows are not factory farmed,” Lorraine Sequeira told VillageSquare.in. “Ethically reared native cows give healthy milk.”

The farmers’ families also consume A2 milk and reap the health benefits. “The number of children falling ill due to allergy and stomach ailments has come down after they started drinking the native cows’ milk,” Siddaraju told VillageSquare.in.

Plans are afoot to integrate the farmers into a cooperative style private limited company, so that they can sell 5,000 liters of milk collected every day directly, after processing. Thus they can earn the maximum profit and also become aware of selling and marketing strategies.

According to the promoters, price of organic milk can be brought down when more farmers rear local breeds and consumers realize the benefits of natural pro-biotic milk obtained from the native cows.

Sudha Narasimhachar is a journalist based in Bangalore. Views are personal.