As snowfall reduces and glaciers retreat in Ladakh due to climate change, a group of women is promoting traditional ways of farming that are best suited to the cold desert 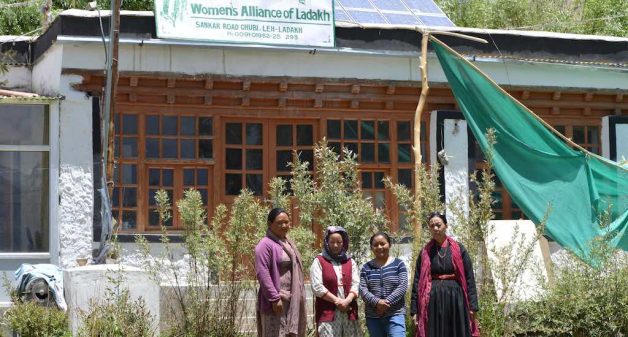 Tsering Chondol (right), President of Women’s Alliance of Ladakh, with three other members outside their office in Leh (Photo by Athar Parvaiz)

The Women’s Alliance of Ladakh (WAL), while making efforts to protect Ladakh’s environment and preserving its culture, is persuading farmers of the cold desert to practise organic farming and traditional water harvesting as farmers face water scarcity because of low snowfall in recent years.

“It seems water is gradually vanishing from this place. We need to be prepared for water-related challenges ahead,” said 60-year-old Tsering Chondol, President of WAL, which counts some 4,000 women in 114 villages of Ladakh as members.

“The sooner we get serious about finding solutions, the better it is,” said Chondol, who wore a billowing black gown called Goncha (traditional dress of Ladakhi women) with a multi-coloured scarf hanging over it from her neck as she sat at the porch of her office in Leh. “This year, many farm lands are without crops as there was no water when they needed irrigation,” said Chondol as sunlight illuminated her face.

WAL, she said, urges people to adapt to the changes taking place around them. “We can’t relax and let these changes take a toll on us,” said the strapping lady who seems a bit reticent, but doesn’t hesitate to give long answers when asked about the challenges being faced by Ladakh’s environment, culture and traditional ways of farming.

What Chondol’s organization draws strength from is the complete ban on polythene carry bags, which WAL was able to enforce successfully, ridding the ecologically sensitive Ladakh region from plastic carry bags.

“We are happy that people heeded our pleas for eliminating plastic carry bags from our land. It has given us hope that the farmers of Ladakh would cooperate with us as we urge them to stick to traditional methods of farming,” Chondol said.

WAL does not only urge farmers to harvest water in off-season (winter) for using it when water is not available in early spring, but also advises them to use organic manure instead of chemical fertilisers, a farming method Ladakhi farmers have traditionally employed.

Dependent on snow and glaciers

Being a cold desert, agriculture in Ladakh depends on snowmelt and glacier-melt. “Due to the semi-arid condition of Ladakh, glaciers are relatively small and are typically restricted to high altitudes. Despite their small size, the water stored in these glaciers determines the potential for irrigated crop cultivation, which forms the basis for regional food security and socioeconomic development,” says a research paper published in Geosciences journal in April 2017.

The perception of local inhabitants, the paper says, appears to be that glaciers in Ladakh have shrunk drastically over recent decade. “As local village communities are entirely dependent on the melt-water supply, such glacier dynamics directly affect their livelihoods and the sustainability of land use systems.” 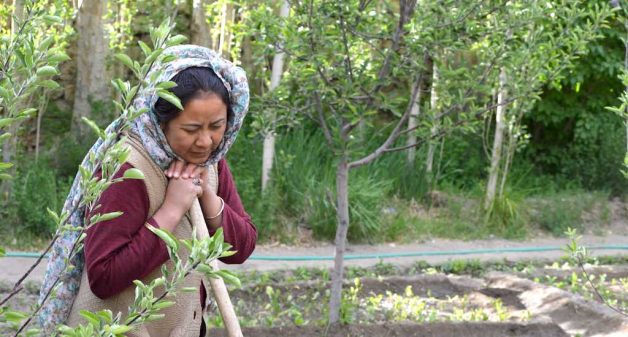 The Indus River is far from the farmlands of Leh and too far below – at the bottom of steep gorges – for the farmers to rely on its water, though a few farmers living on its banks manage to lift water from it with support provided by the Leh agriculture department. Tsering Motup of Phey village on the bank of Indus is one of those fortunate farmers.

He has over three acres of land, which he irrigates by just turning on the switch. “Most of this land was fallow, which I converted into productive land after taking cultivable soil from a far off place. But it was possible only when I could lift the water from the Indus, thanks to the subsidy from the agriculture department,” said Motup.

He said that he earns a profit of around Rs 300,000 every year by growing vegetables like spinach, tomato, cabbage and potato. “The greenhouses provided by the agriculture department help me grow vegetables in winter months as well,” he said.

Most farmers in Leh are not as lucky. Cham Dolma, a 56-year-old farmer of Leh town, said that her family had to spend Rs 150,000 to irrigate their farm near their house and to get water for the home. “What else we can do? We are only able to get a constant supply of water when it snows during winter,” Dolma observed.

“Our farm feeds us throughout the winter as we put enough quantities of vegetables like potato, turnip, onion and radish in our cold store which suffices for entire winter. That is why we made the bore well to make sure that our farm gets water,” said Rinchen Angmo, Dolma’s daughter. “We never buy anything from the market.” Farmers are increasingly depending upon bore wells to irrigate their farms.

Experts say that massive demand for groundwater has put pressure on the aquifers. According to a document, Water in Leh: A drop in the desert, 90% of Leh town’s domestic water supply is met by groundwater, either through private or government bore wells. “This presents a few problems. Climate change is affecting the water cycle and, in turn, affecting groundwater recharge while extraction is increasing as more and more bore wells are drilled to cater to the needs of tourists,” the document says.

“When there is good snowfall in Ladakh’s mountains, it makes water available to farmers in the form of snowmelt in early spring, and later, the glacier-melt suffices their needs as the summer progresses. But this winter there was no snowfall, as in many winters in recent years,” said Tashi Tsetan, chief agriculture officer of Leh.

He said that scarcity of water is a huge challenge farmers are facing in Ladakh. “Earlier, there was no scarcity as farmers’ needs were being fulfilled by water from the snowmelt, as also by glaciers. But, both seem to be vanishing. Now it snows only in some winters, not always. Similarly, glaciers used to extend right up to the villages, but they are fast vanishing. For example, look at the Khardung La and Stoke glaciers,” Tsetan said.

His department is advising farmers to store the water during winters when it is not needed for crops. “This recharges groundwater and farmers can use it for irrigation,” he said, adding that farmers have traditionally stored water by making artificial glaciers during winter near the villages.

This was first published in India Climate Dialogue.