In large parts of the subcontinent where floods or droughts are annual or recurring events, people in rural areas have evolved location-specific strategies to deal with the disasters and unusual weather 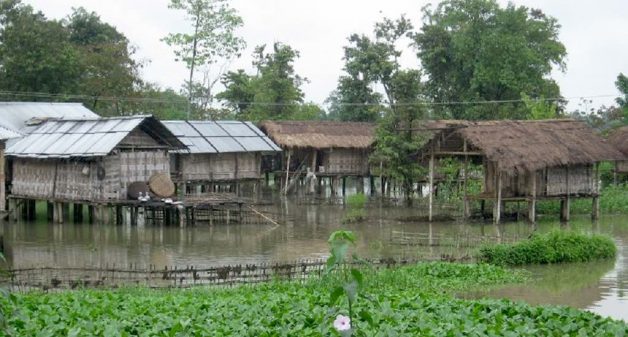 In the summer of 2004, temperatures in coastal towns of southern France rose to a record 41 degrees Celsius. It is said to have resulted in the death of over 10,000 citizens, mostly elderly people. It intrigued me no end as to why there was such a huge death toll in a developed country from what appeared to be just a little warm weather.

We in India routinely live with temperatures rising beyond 45 degrees with very little mortality and limited morbidity. Similarly, towards the end of the Ajit Jogi administration in Chhattisgarh in the early years of this century, the state experienced an unprecedented drought, leading to widespread distress and paddy crop failure, even though the rainfall was above 800 mm in most of the parts of the state in central India.

Much of Gujarat and Rajasthan would consider 800 mm as excess rainfall. Despite nine consecutive years of deficit rainfall, much of Bihar goes on as usual just, as most of the North Bihar and much of the Brahmaputra River valley treat floods in Himalayan rivers as a matter of routine annual occurrence. While some damage and mortality does happen, the regions simply shrug off the event and get on with their usual life. And a severe flood in Kerala, caused by incessant rains and perhaps bad reservoir management, throws every thing out of gear.

It is not an attempt to deliberately underplay severity of any of these unusual weather events. We try to explore the issue of differential effects caused by unusual weather events in different parts of the country and the globe. The answer as to why similar weather and other natural events cause differential impacts in different geographical locations is simple: it relates to difference in how the people living there have evolved ways of living with the nature around them.

For instance, we in India traditionally coped with summer heat by three things — covering as much of the body as possible, drinking as much water as frequently as possible, and staying in the shade. If people here behaved strangely in drinking bottles of beer and staying in the open, on beaches or in public parks, almost completely bare-bodied, when outside temperatures rise to mid or high forties, the death toll in India would run into lakhs. Avoiding chances of dehydration every possible way is the key to survival in heat and this has been internalized in our life pattern in India.

It is instructive to look at the traditional wisdom and ways of coping of rural communities to such natural events with a view to derive lessons from them. Communities in Brahmaputra River valley as well as in North Bihar teach a great deal about living with floods, while communities in a large tract of semi-arid regions tell us about living with deficit rains and droughts. Let us start with the latter.

Riparian settlements of Meishing and of the Sonwals in Brahmaputra valley are seen as clumps of stilted houses. The house rests on a set of 6-7 ft stilts. The inmates of the house climb up on a single long pole of wood, often carrying grain or foodstuff up and down.

During dry weather, goat and pigs are tied below the house and much household as well as productive activity happens there. When floods come, the small ruminant is picked up and taken in the house, flood waters roar below the house and the inmates manage to live in the stilted house, boiling the same filthy flood water to drink and surviving on grains and fodder stored in advance anticipation of the floods.

One can see stilts as far west as the Cooch Behar flood plains of the Teesta River in West Bengal. Tiny tin walled and roofed huts are seen on bamboo stilts of 2-3 ft and the life pattern is much the same as of the Brahmaputra valley people.

Elsewhere, for instance in Nalbari in Assam, while the housing is not on stilts, people do make elaborate preparation in anticipation of floods, storing requisite necessary materials on relatively high ground and even creating temporary tents even before floods hit them. In these regions, floods are of the sailab kind, lasting for months at a stretch.

While people in North Bihar do not have stilted homes, they do have mechanisms of survival by shifting residence on river embankments, moving valuables and food in advance of the floods and surviving for days on sattu (a flour consisting of a mixture of ground pulses and cereals) mixed in water since dry fuel wood is difficult to obtain.

Farmers here have small landholdings but that too is divided in many plots since the degree of water logging or flood damage could vary with location of the plot. None of them have traditionally solved the sanitation issue with much success and only the modern help has created things like raised latrines. However, women do have a severe distress during the times of flood as they have to carry on with life and its demands for their productive and reproductive roles.

Coping with droughts has a set pattern to it in India’s semi-arid zones. In North Gujarat, for instance, traditionally the farmers had two sets of crops: those that could be sown in June if monsoon came early, or if not then a set of crops to be sown in late July if monsoon was delayed. Smallholdings of land are further sub-divided in a number of plots.

Mutuality based social systems centered around the local moneylender, thinning of crop stands to enable better survival in dry patches, reduction in unnecessary consumption and scaling down of celebrations, asset disposal and if worst comes up then migration are some of these coping strategies.

Communities living with events of these kinds have evolved these ways over decades and they can pretty much cope and survive with what may be termed a ‘normal bad event’ of drought or flood. But when Black Swan events (such as three consecutive droughts as in 1985-87 in western India or barrage break in the Kosi River in 2008 leading to flood havoc in downstream Supaul and Khagaria in Bihar occur, communities need external assistance.