Villagers of Diezephe near Dimapur have revived their traditional crafts and weaves by adapting to market demands and by using modern tools, and have found themselves an ecofriendly livelihood 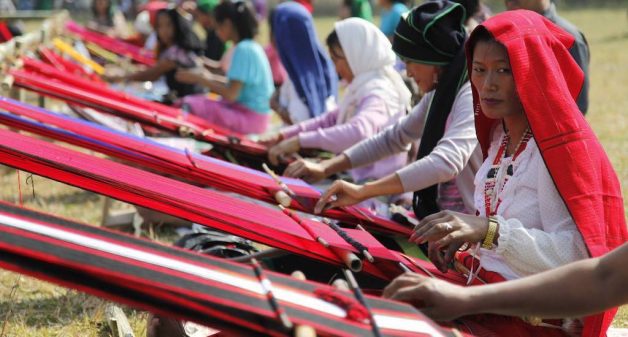 When each household is engaged in craftwork, it is little wonder that the village is popularly called Diezephe Craft Village. Nagaland Handloom and Handicrafts Development Corporation Ltd took the initiative to develop Diezephe, home to artisans with excellence in wood carving, cane and bamboo work, as Diezephe Craft Village.

Located in Dimapur district in the state of Nagaland, at about 13 km from Dimapur, the headquarters of the district, Diezephe has a population of 755, as per Census 2011. Every household in the village is engaged in making handicrafts.

Villagers are adept at their craft, traditional skills and knowledge having been handed down through generations. By adapting to modern needs and tastes, the craftsmen use their traditional craft skills to make items of utilitarian value, thus sustaining themselves and their craft.

Velasuzo Shizo has turned his family home into a crafts center. Shizo’s family has been in the trade for generations. He took over the business, after having acquired the skills from his father, also a craftsman.

The 62-year-old started in small way. Academics didn’t hold the same interest as the craft. Hence he focused on the craft, of which he was passionate. “There was no technology in the past, and I used only my dao (traditional knife) for practicing the craft,” Shizo told VillageSquare.in.

As he slowly mastered his craft, by 1995, his work gained popularity. Subsequently he attended craft training sessions to hone his skills further. Then with subsidy from the state government, he purchased machines to cut and plane raw materials such as wood and bamboo.

He began to participate in exhibitions and to network with buyers. He supplied his products to Dimapur, Shillong and Guwahati, and even outside India. “Since we supply mostly on order, customers just come here and collect the products,” Shizo told VillageSquare.in.

From collecting raw materials from the forest, to making craft items and transporting the finished products, many of the villagers are engaged in the craft trade. 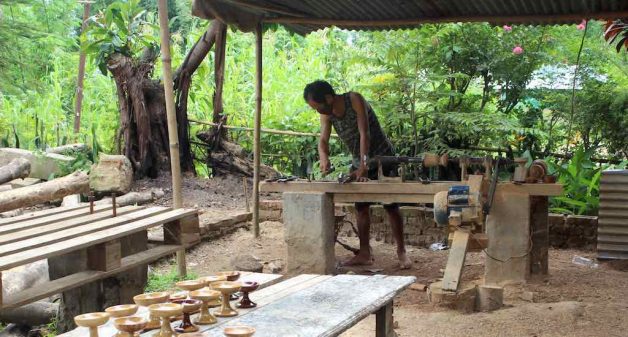 All the villagers make souvenirs, gift items, and household utensils. Most often, members of the household take part in the craftwork or the business side of it. Shizo’s wife, for example, takes care of their showroom. Prices of Diezephe handicrafts range from Rs 50 to Rs 10,000, and more at times.

While the men are engaged in making crafts from wood, bamboo and cane, women are engaged in weaving, using traditional loin looms. The women, who make up nearly half of the population of the village, are engaged either in the process of making yarn or weaving.

The villagers practice traditional crafts that are still much in demand. Traditional baskets are still in use. Now the craftsmen introduce more variety and shapes, so as to cater to market demands.

The Naga dao box is still demand. The Dzutho — a traditional wine bottle made of bamboo — is another traditional craft item that Shizo continues to create. These products are given a minimal modern touch and facelift, to make them of interest to the buyer.

Besides making items of traditional value, villagers make new items such as key chains, decorative items and showpieces that are commercially viable. With the availability of machines, the craftsmen have shifted from bamboo craft to woodcarving. The villagers also make earthenware kitchen utensils.

Every woman in Diezephe owns a loin loom, an important aspect of the northeastern society. Women use the traditional loin loom to weave clothes for members of the family. Learning by helping the elders in the family, girls learn weaving right from a young age.

Sonnie Kath founded Exotic Echo Society in Diezephe to put the weaving skills of the women to good use and to provide a sustainable livelihood for women, besides to preserve tradition and culture. Over 200 women weavers of Diezephe are associated directly or indirectly with the Exotic Echo Society.

Weaving for the market

The women make clothes, fashion wear and household furnishings, all catering to modern needs. They undergo training as and when they decide to introduce new products or designs. 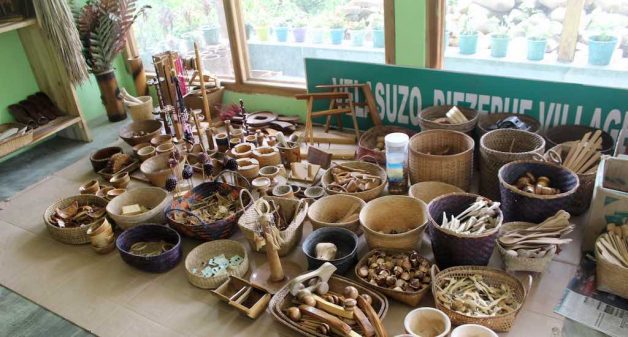 “Our history is in our textiles,” Kath told VillageSquare.in. “For the women, it is not only about weaving, but also about identity and asserting their skills and knowledge.” According to Kath, the advantage of weaving in a loin loom is that, it needs no huge capital.

At the society’s facilitation center at Diezephe, a range of products — from traditional dresses to fashion wear to everyday accessories such a hand bags, back packs, and cushions — are on display.

Initiatives such as Kath’s and Shizo’s are not without challenges. With traditional crafts having a limited market, the craftsmen sell their products through exhibitions and networking.

“Our products are exported even outside India,” said Kath.  In an attempt to further sustain their work, Exotic Echo society has initiated production of raw materials such as yarn.

Moreover traditional handicrafts have to compete with cheap products from neighbouring countries that flood the markets, the northeastern states in particular.

According to Kath, weaving is no longer a vocation for the new generation and even the skills and art are slowly declining. With the revival of the traditional crafts, the villagers are taking recourse to the eco-friendly livelihood. Craft and Development Society, a community common workshop where craftsmen can use tools for a fee, is an initiative by the government to further this cause.