With a science-based approach learnt from mobile science labs through the audiovisual medium, tribes in Odisha have adapted simple measures that have helped in reducing their health problems 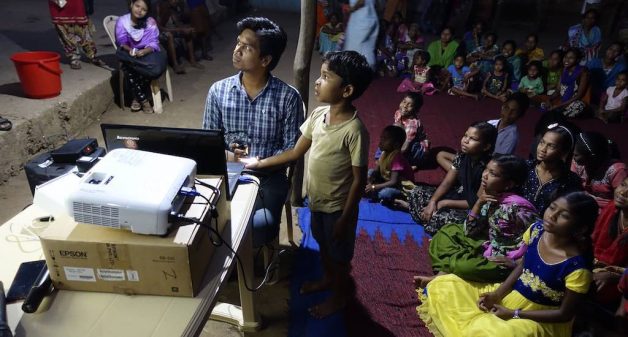 Residents in tribal-dominated districts of Rayagada, Kalahandi and Kandhamal in Odisha wait enthusiastically for the Mobile Science Lab. The tribes in these districts are uninformed, steeped in superstitious beliefs and face resultant health issues.

The labs are infotainment vehicles that educate and inform through entertainment. The team conducts the labs’ programs in the evenings when men and women would be back after a hard day’s work and the children would be back from school.

Dandiguda, a tribal hamlet with a population of 120 in Lanjigarh administrative block of Kalahandi district, was one of the stops for the lab. Earlier, children of the village had acted as messengers, inviting all the villagers to the village square where the science show would take place.

Located quite far from the district headquarter, Dandiguda does not have electricity. The science coordinator connected the necessary equipment using a solar panel invertor. “Most of the villages in these parts do not have electricity,” Manish Mishra, science coordinator of Lanjigarh administrative block, told VillageSquare.in. “So the lab has its own solar invertor to conduct audiovisual shows without interruption.”

Villagers of these tribal dominated districts regularly fall prey to malaria, diarrhea, and stomach ailments that can be prevented, by creating awareness. Explaining the importance of personal hygiene, Mishra showed the hands of a schoolboy through a digital microscope. 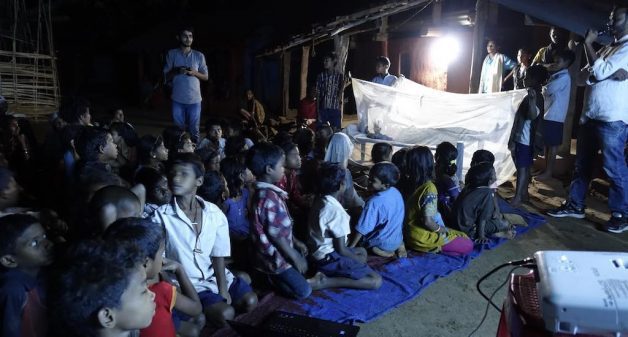 The villagers saw the reality, though the boy had claimed that his hands were clean. They learnt the importance of washing their hands with soap.

Through a film, the villagers learnt how contaminated water could lead to diarrhea and stomach ailments. “The small videos help the uneducated people understand health and sanitation issues easily,” Mishra told VillageSquare.in. “The videos are quite impactful.”

To tackle malaria, the lab advocates the use of mosquito nets. “The main reason for incidence of malaria is that villagers do not use the mosquito nets provided by health workers,” said Mishra.

Most of the villagers were using the mosquito nets as fishing nets, to fish in ponds. The villagers learnt to put the net to its intended purpose, when the coordinator demonstrated its proper use, with the help of a volunteer from the village.

“This Mobile Science Lab has taught us many things from cleaning hands to visiting doctors and using mosquito nets,” 22-year-old Sangeeta Majhi of Dandiguda told VillageSquare.in. “This is a good initiative for the illiterate masses.”

Mobile Science Lab has travelled through nearly 120 villages, instilling rational thinking among the community in the three districts, where 60% of the population are tribes and Dalits. In the remote villages of these districts, people still do not go to a physician, but depend on witch doctors, locally known as gunia. 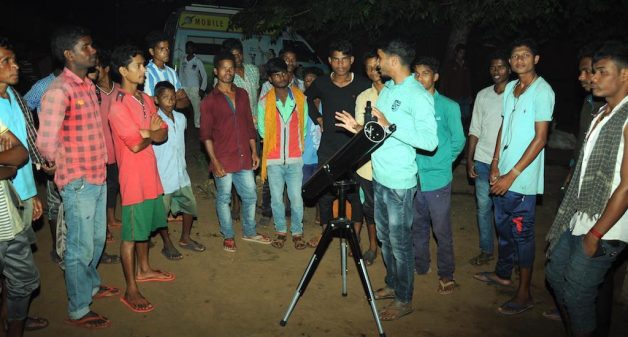 Special initiatives for villagers, such as arrangement for observing celestial events, give them exposure to science (Photo by Manish Mishra)

The young and the old alike were surprised when the coordinator demonstrated some of the tricks that gunias use to lure the villagers. “It is very important to demonstrate these tricks, so that they will develop a scientific temperament,” said Mishra.

“With regular awareness programs such as this, everyone has started going to the doctors instead of to quacks,” villager Kamalakanta Hikkaka told VillageSquare.in.

Besides, the lab arranges special programs such as night sky observation on celestial events. “It was a rare experience when we observed the blue moon and lunar eclipse on 31st January this year,” villager Dambaru Hikkaka told VillageSquare.in.

The regular movement of five Mobile Science Labs in five blocks helps in generating a lot of interest and creating awareness by exposing people to scientific thought. “Though we educate villagers on topics related to health, sanitation and nutrition, we also expose them to various scientific experiments so as to do away with age-old superstitions and blind beliefs,” said Mishra.

“We are illiterate and sometimes find it difficult to understand health related issues in Odia language but the coordinator explains to us in our Kui dialect,” Pitu Majhi of Dandiguda village told VillageSquare.in. Till date, the lab has reached about 12,000 villagers, helping them shed superstitions and develop a scientific interest.