Farmers of Waigaon in Maharashtra have received a GI tag for organically grown turmeric that is rich in curcumin, known for its multiple health benefits. The cultivators hope to cash in on the increase in demand 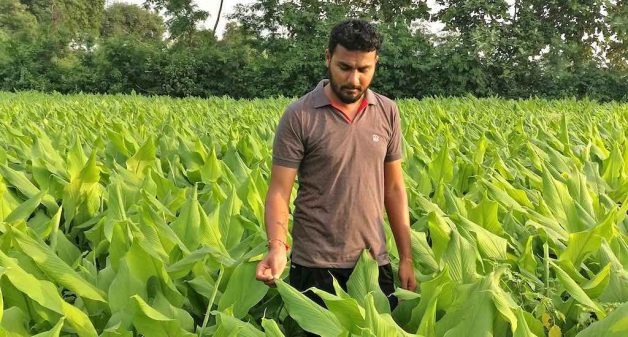 Vivek Ghumade plans to increase his turmeric acreage, as the GI tag of Waigaon turmeric is expected to increase demand (Photo by Hiren Kumar Bose)

“I was overjoyed,” said Manoj Gaydhane, a farmer of Waigaon, a non-descript village in Wardha district of Maharashtra. “And so were the villagers, for this would bring us international fame.” What he was referring to was the Geographical Indication (GI) tag that the turmeric grown in their village had received.

Till now Waigaon’s claim to fame is the dargah of Baba Sheikh Farid Giradwale, since pilgrims visiting the saint’s resting place during Muharram need to take the Wardha-Girad Road or the State Highway 258 passing through the village. But now the world would know Waigaon – a village of 2,300-odd people who have been growing a unique variety of turmeric for generations.

GI mark helps the farming community obtain a premium price, and creates an export market, leading to a spurt in international demand. However, the growers, the ultimate beneficiaries, need to get themselves registered as authorized users to avail of the benefits.

A geographical indication (GI) is a name or sign used on certain products that correspond to a specific geographical location or origin and the community’s intellectual property. The World Trade Organization (WTO) Agreement on Trade-Related Aspects of Intellectual Property Rights (TRIPS) defines geographical indications as those that identify a good as originating in the territory of a member, or a region or locality in that territory, where a given quality, reputation or other characteristics of the good is essentially attributable to its geographic origin.

The records at the Wardha district office mention that turmeric has been grown here since the Mughal times, chiefly cultivated by the Mali community as a rain-fed crop. Other communities like Teli, Kunbi and others too have taken to growing the crop. 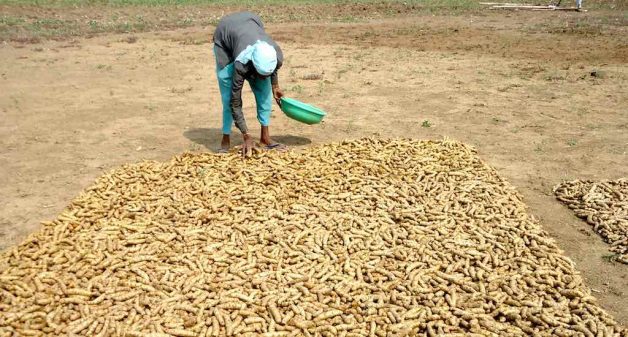 Traditionally shade-dried, some farmers dry the turmeric rhizomes under the sun (Photo by Hiren Kumar Bose)

Over the years the Waigaon variety had lost its vigor, but the Akola-based Dr Panjabrao Deshmukh Krishi Vidyapeeth restored it after a seven-year-long research. “In 2105 we introduced the purified variety called Waigaon 1,” B.M. Bhale, vice-chancellor of the vidyapeeth, told VillageSquare.in. “We have been supplying around 25 tons of seed material annually to not only the local growers but others too.”

The rhizomes are sown in early June on the district’s black alkaline soil. The crop is ready for harvest within 180 days, unlike the other varieties that take between 220 days and 240 days to mature. In fact, the turmeric grown here has an edge as it arrives in the market early.

Thanks to its distinct dark yellow color and rich aroma, the variety has earned fame, with traders from neighboring districts like Hinganghat, Nagpur and Chandrapur arriving in hordes in January to buy the stock.

Native to South Asia, turmeric is a perennial plant belonging to the ginger family. The name turmeric is derived from Latin terra merita (meritorious earth), referring to the color of ground turmeric. It is such an integral part of Indian cuisine, rituals and religious ceremonies, that Sanskrit has 52 names for the spice! The reported consumption of turmeric in Asian countries is 200 to 1,000 mg/day.

The cultivars are known by the locality where they are cultivated, namely Duggirala, Tekurpeta, Sugandham, Amalapuram, Erode local, Alleppey, Moovattupuzha, and Lakadong. Besides, there are 17 improved varieties with curcumin content ranging from 2.8% to 9.3%, according to the Kozhikode-based Indian Institute of Spices Research (IISR).

In Samudrapur taluk, turmeric cultivation is spread over 1,300 hectares, with a production of around 19,500 tons. Barely 30% of this is under organic certification. “Increasing number of farmers are taking to organic methods, having realized the importance of soil health,” Gaydhane, an agricultural assistant with the taluk told VillageSquare.in. “Also organic produce attracts a better price compared to those grown with chemical fertilizers.”

Motivating farmers to adopt organic methods, Gaydhane has assisted farmer groups in Lasanpur, Girad, Waigaon, Hiwara Parodhi, Shiwanfal, Wagheda and many other villages to register themselves as organic growers under the Participatory Guarantee System for India, a decentralized organic farming certification system of Ministry of Agriculture and Farmers’ Welfare.

Around 80% of farmers in Waigaon village grow turmeric. According to Waigaon Turmeric Growers Group that initiated the process of acquiring the GI mark, around 400 farmers cultivate turmeric in Samudrapur taluk. In addition they grow crops like soybean, horse gram, groundnut, cotton, paddy, etc. 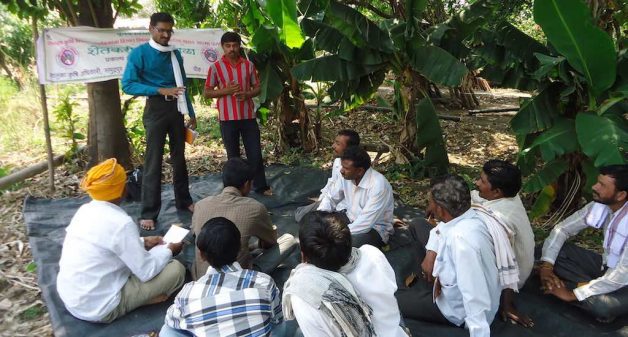 Vivek Ghumade, a 25-year-old postgraduate in Chemistry, grows turmeric in one-and-a-half acres in Waigaon, and grows soybean, lemon and horse gram in the rest of 14 acres. “We sow in June and by January we harvest and process using traditional methods like boiling the rhizomes and drying it in shade,” Ghumade told VillageSquare.in.

So far, most of the Waigaon farmers have been processing turmeric individually and in the traditional way, which took nearly a month. Soon a processing facility promoted by two self-help groups, comprising of 340 women members will directly convert the farm fresh wet turmeric rhizomes into dry powder within a day, with qualitative and quantitative improvement in turmeric powder.

Like other growers in Waigaon, Ghumade plans to increase the area under turmeric next year. “If we intend to double our farmers’ income, we can’t continue to supply the raw material to the world but need to make value-added products,” K. Nirmal Babu, Director of IISR, told VillageSquare.in. “If Switzerland could become leaders in chocolate manufacturing without growing cocoa, we too can, with the abundance of raw food materials.”