The wooden doll makers of Natungram in Burdwan district have traditionally done good business during Durga Puja, but this festive season has brought little cheer to them due to reduced orders 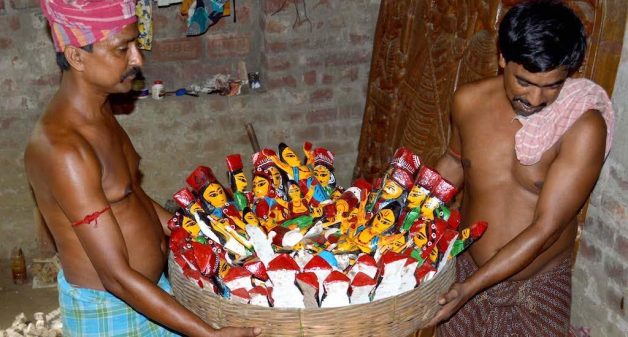 Gour Sutradhar has been spending sleepless nights these days. It’s not work that keeps him awake, but the lack of it. The 45-year-old is a wooden doll maker based in Natungram at Burdwan district of West Bengal. Natungram is known as a hub of artisans who have mastered the art of making wooden dolls.

It is not clear as to when and how the village became the hub of wooden doll making in the country. But many believe that it was their proximity to Mayapur, the birthplace of Chaitanya Mahaprabhu located just 45 km away, which might have played a role in the development of the craft in this village over two centuries ago.

“As Chaitanya Mahaprabhu is held in reverence among the Bengali community, the villagers began making wooden dolls of the Mahaprabhu and sold to the shopkeepers in Mayapur,” history enthusiast and blogger Rangan Datta told VillageSquare.in. Chaitanya Mahaprabhu was one of the leading lights of the Bhakti Movement in India during the 16th century.

Over time, they started making more products included wooden owls, considered auspicious because of being the vehicle of Laxmi, the goddess of wealth. “The market for the new products grew and the artisans began to prosper,” said Datta. The artisans are Hindus, having their last name as Bhaskar meaning sculptor, or Sutradhar, meaning storyteller.

Almost all the 82 households comprising of over 300 artists are involved in the art of wooden doll making in Natungram. Men usually cut and carve the wood, while the women and children color the dolls. “Every year, from across the state, we receive work from artists and puja organizers who use wooden dolls to decorate the pandals,” Sutradhar told VillageSquare.in. 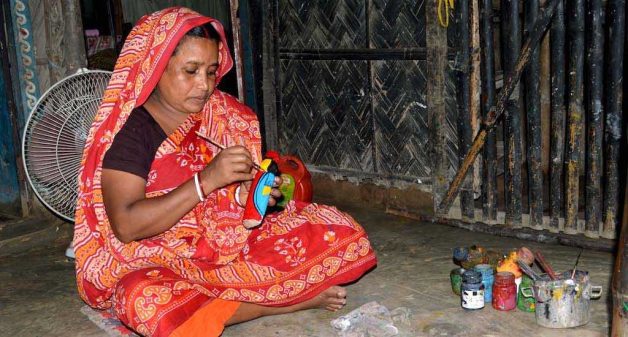 In Natungram, men carve the wooden dolls and women color them (Photo by Gurvinder Singh)

The organizers usually visit Natungram almost four months before the start of the festival for pre-orders. “We work 15-18 hours every day to complete the orders, with hardly any time to have a good sleep in the months leading to the pujas,” said Sutradhar.

The situation is different this year, with hardly any work. Sutradhar feels that Durga Puja, the main festival of Bengal, will not bring smiles to their faces or fill up their pockets because of dearth of orders this year. Sharing similar sentiments, other artists of Natungram said that just a handful of them have received bulk orders, with the others remaining idle.

“Even I used to do around Rs 3-4 lakh worth of business every year around the festival, but it has tobogganed to around Rs 70,000, this year,” 60-year-old Bijoy Sutradhar told VillageSquare.in. “It has made it difficult for us to even employ helpers for the work, since we have to pay them around Rs 500 every day excluding their food expenses.”

The artisans specialize in making wooden owls, brides and idols of different gods and goddesses. With the advent of time, there have been minor modifications but generally they stick to traditional designs. A section of the puja organizers see this as a constraint and also reiterate that the artisans need to adapt to modern times. 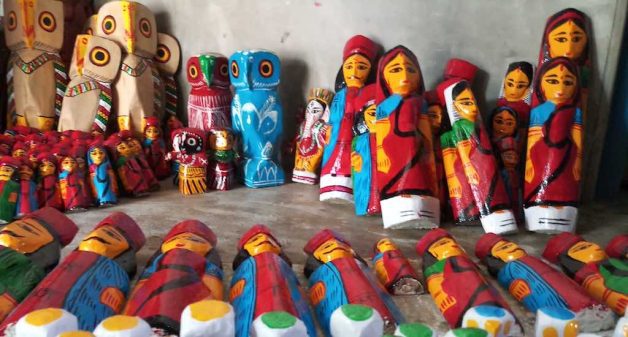 “They stick to the traditional designs and have failed to adapt to the changing times,” Pradip Parui, President of Vivekananda Sporting Club at Lake Town in Kolkata told VillageSquare.in. “The puja organizers come up with new themes every year and the wooden doll makers are yet to make new products to match the theme.”

Amitava Bhattacharya, the founder of Bangla Natak, a social non-profit working for rural artisans in Bengal, argues that Durga Puja is just a one segment of their business and overall the craftsman have witnessed a growth. “Some of them have even gone abroad to showcase their art in exhibitions,” Bhattacharya told VillageSquare.in. “The government also supports them.”

The artisans agree that they have survived over the years with the help of state government and non-profit organizations that created new markets for them. But the lack of orders for Durga Puja this year has dampened their spirits. The puja organizers and artists who give work to doll makers conceded that the situation is bleak this year.

Bijoy Sutradhar has been making dolls since childhood, having learnt the art from his ancestors. “It seems that the puja organizers have been forced to reduce their budget after corporate houses have tightened their purse strings following the chit fund scams that rocked the state.”

“Several big puja organizers have scaled down their budget because of fewer donations from corporate houses that served as their backbones,” Pradipto Ghosh, a Kolkata-based artist who assigns work to Natungram artists told VillageSquare.in.

Ghosh admitted that he too was working on fewer projects as compared to the bulk work in the previous years. “The chit fund scams have affected the finances of puja committees,” said Ghosh. “There has been a 50% drop in orders this year.”

“They might be facing shortage of orders in Durga Puja but it is just the part of it. Overall, they have got huge market of their products which are quite in demand,” said Bhattacharya.