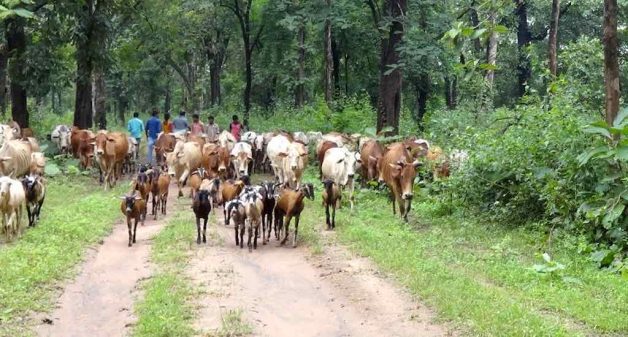 Dalsai Kunjam, a Gond tribal from Junwani village in Dhamtari district of Chhattisgarh, is happy that he can grow crops on his agricultural land without any fear of relocation now that he has an individual forest rights title under the Scheduled Tribes and Other Traditional Forest Dwellers (Recognition of Forest Rights) Act, 2006, over 1.5 acres of land. He says that his agricultural productivity has increased as now he has access to subsidized seeds and fertilizer support under the FRA-2006 convergence.

Kunjam lives in a forest village in which he along with others were rehabilitated from an erstwhile dam project in the early 1960s and earlier the inhabitants of the village were issued 15 years lease over forest land for agriculture. Post the FRA-2006 implementation, the forest village has been converted into a revenue village and has got benefit under various government schemes and is fully electrified. With the recognition of 398,181 individual titles under the FRA-2006 as of May 2018, Chhattisgarh is one of the leading states in the implementation of Forest Right Act, 2006.

Implementation of the FRA-2006 has benefited many individual farmers in the state as the assurance of holding a land title has motivated the farmers to invest in quality farm inputs, however the ground survey done by the Tata Institute of Social Sciences (TISS), Mumbai in 11 villages of Chhattisgarh also reveals that the convergence support has been irregular, and more efforts are needed at the panchayat level to make it more consistent for livelihood enhancement.

Odisha is one of the pioneers in rights settlement and has secured the leading position in integration of convergence schemes post-rights recognition. To ensure benefits are provided to the right holders, a set of guidelines was issued in 2016 by the Odisha Scheduled Tribe and Scheduled Caste Development Department thereby becoming the first state to come out with these guidelines.

Forest communities in Chhattisgarh have started to feel the impact of climate change on their livelihood and are demanding better resilience building activities like soil and water conservation, micro irrigation structures and better variety of seeds for livelihood security. In this situation, promoting climate resilient livelihood convergence schemes among the newly identified farmers under the FRA-2006 is very crucial and can be started by issuing guidelines to the line departments to streamline the process of convergence.

While individual titles are for agriculture and residential purpose, community forest rights under FRA-2006 ensures rights of the tribal to access, manage and protect community forest for livelihood and traditional practices.

Chhattisgarh is the third most mineral rich state in the country and is a hotspot for mining and power industries that put a huge pressure on forests and forest dwellers who are dependent on the forest for their livelihood and depend on it for collection of non-timber forest produce (NTFP), firewood, grazing, medicinal plants collection etc. Under this condition it becomes crucial for the state to ensure that its forest dwelling population is protected from being exploited to give way for larger development projects and protected areas.

As per the status report on the implementation on the FRA-2006 till May 31, 2018 published by the Ministry of Tribal Affairs, Chhattisgarh is also one of the leading states in community titles settlement. However, the report does not dis-aggregate the details on development rights (which is forest diversion for basic infrastructures like school, day care center, road, etc.) and community forest rights under the act. Officials of the tribal welfare department in Chhattisgarh agree that more focus on proper implementation of the community forest rights needs to be done in the state.

The Promise and Performance Report prepared in 2016 by the Community Forest Rights Learning and Advocacy Group states: “One of the challenges with community forest right titles in Chhattisgarh is that they have been issued in the name of JFM committee and not gram sabha (people’s representative body in the villages). Also, the titles are issued selectively for either grazing, NTFP collection or firewood collection under the condition to follow the workplan of the forest department, which is in direct violation with the spirit of the law.”

Many villages in Chhattisgarh whose community forest rights have been recognised selectively, have started asserting their rights over community forest resource management by formation of management committees (CFRMC) under the Rule 4 (e) of the Forest Rights Rules, 2008 with the support of local organisations which are further supported by Oxfam India working in Chhattisgarh.

Padki village’s gram sabha has formed a community forest resource management committee and is conducting regular patrolling for protecting and conserving this area from illegal timber smuggling. In the year 2016, Padki village forest dwellers collected mahua flowers worth Rs. 100,000 from their community-managed forest. The committee has also undertaken plantation of indigenous plant varieties, maintains a biodiversity register of the CFR area and has reported the presence of sloth bear and leopard in their community forest after the conservation efforts of the villagers.

However, a major challenge for the other villages like Padki is that their community forest rights titles are in the name of the joint forest management committee and not the gram sabha. This has created conflict between the forest department and the forest dwelling community.

Indigenous communities have long been in the frontline of resistance against deforestation and their resistance to forest diversion prevents land-based carbon emissions and increases carbon sequestration. One of the ways the state governments can develop the adaptive capacity of the vulnerable population of tribal and forest dwellers is by recognizing individual and community rights of forest dwellers under FRA-2006 which supports access to critical life-sustaining resources that support subsistence, livelihood, food and water security together with socio-cultural integrity.

Asha Verma is a journalist based in Raipur, Chhattisgarh. Views are personal.

Asha Verma is a journalist based in Raipur, Chhattisgarh.