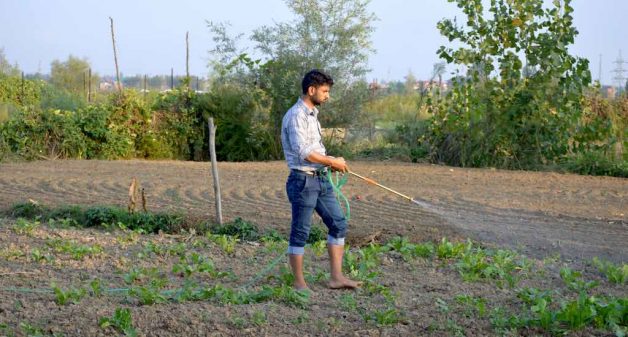 Early this year, the irrigation department of Kashmir had issued an advisory to farmers in the northern districts to avoid growing rice in the wake of a dry winter, which followed an extended drought of over four months. Some farmers paid heed, but most decided to go ahead despite the advisory.

Today, at the onset of autumn, which heralds the beginning of paddy harvesting, only around 25% of rice land has suffered due to drought, according to Kashmir’s agriculture department. The department’s information officer, Naseer Ahmad Lone, said the crop has only suffered because of drought at some places in Kupwara district, which is in far north, while it has remained unaffected in Baramulla and Bandipora districts.

As per the reports received by agriculture department of Kashmir, Lone said, almost the entire area of 141,000 hectares where rice is grown in Kashmir has not suffered due to lack of water. “A number of factors helped farmers cultivating paddy which needs a lot of water for irrigation. In some areas, streams had not dried up while in some areas stored water served the farmers’ needs,” Lone said.

Given the massive unemployment crisis in the Himalayan state of Jammu and Kashmir, a number of young entrepreneurs in Kashmir have taken to growing vegetables. Jammu and Kashmir has the highest unemployment rate compared with any other state in India. In many parts of Kashmir, the youth are harvesting water as the region often faces water shortages and are doing successful agricultural business.

In Maloora area of central Kashmir Tariq Ahmad, who is a postgraduate, has over an acre of land under vegetables, which is fed by the water-harvesting ponds in the land. “We never face any water crisis because of these ponds,” Ahmad said.

He has dug three deep ponds in his land at a cost of over INR 70,000 (USD 960), but earns over INR 300,000 (USD 4,120) annually from his land, thanks to the water-harvesting infrastructure he has created around his vegetable farm.

Each pond in his vegetable farm, he said, is over 700 sq. ft in area and is more than 10 ft deep. “We purposely make them deeper so that they retain more water and the sunlight doesn’t affect them that quickly,” Ahmad said.

Another young farmer Naseer Mir said that he has started growing fish in his ponds. “Last year we had a good crop of fish, some of which was stolen. That prompted us to put a network of barbed wire over our ponds so that fishermen don’t come during nights and steal fish from our ponds by throwing their nets in our ponds,” Mir said. 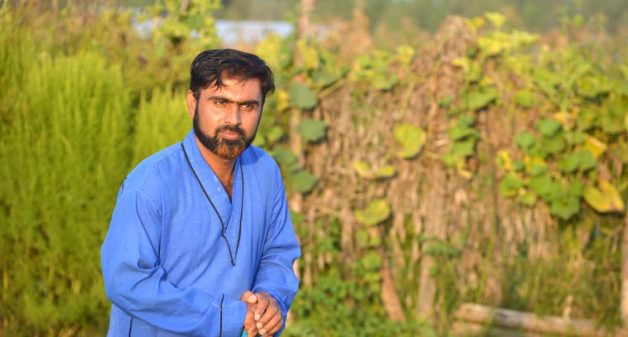 Tariq Ahmad, a young, educated farmer at his farm in Maloora in Kashmir (Photo by Athar Parvaiz)

Even seasoned farmers in the area are happy about the way the young agriculturalists have laid simple water-harvesting infrastructure in their farms. Their farms, which are dotted with ponds, are a good example of how water harvesting can make a huge difference to agricultural production, especially at a time when extreme weather events like droughts are becoming more frequent.

“I produce vegetables worth INR 300,000 a year thanks to the ponds, which I have dug on my land,” said Abdul Rashid, a farmer of Panzinara on the outskirts of Srinagar.

In north Kashmir, many farmers near the apple town of Sopore and further north in Kupwara mostly rely on harvested rainwater for irrigating their farms, particularly their vegetable farms. “I grow vegetables all the year for my home and for sale as well with the help of a small pond which I have kept for harvesting rainwater,” said Mohammad Shaban, a farmer in Seelu-Sopore.

Experts say that if storing of rainwater that the region receives so frequently is taken care of, the stored water can irrigate most of the agricultural land. “The only thing the government and the farmers need to do is to create water-holding infrastructure like ponds in and around the farms for harvesting rainwater,” said Saqib Qadri, a Srinagar-based environmentalist who advises companies and governments on capacity building.

“The government of Jammu and Kashmir needs to engage appropriate experts for devising appropriate designs in different areas for rainwater harvesting,” Qadri said.

According to Kashmir’s well-known glaciologist and climate change expert, Shakil Romshoo, who heads the Earth Sciences Department at Kashmir University, water availability in Kashmir is manageable if the government helps the farmers in storing water by investing in water harvesting infrastructure.

“The water supply problem, we witness in some parts of the state, is not intrinsically due to the depleting water resources but it has more to do with the inadequate water infrastructure, management and governance,” Romshoo said. “There is a need for an informed and long term strategy to optimally utilize our precious water resources in light of the changing climate and depleting cryosphere (snow and glaciers).”

According to official figures, 70% of Kashmir’s seven million people are directly or indirectly engaged in agriculture and allied sectors. Much of Kashmir’s total area of 2.4 million hectares is mountainous or forested.

As per a recent economic survey, only 41% of Kashmir’s agricultural land has irrigation facilities. The rest of the land depends on rainfall.

Lack of irrigation facilities is one of the main reasons why some farmers are selling off land to real estate builders in various parts of Kashmir though some farmers sell off land for economic reasons as well.

To some farmers, converting their paddy land into orchard land, which needs no irrigation, makes more sense. A lot of farmers are selling agricultural land in Kashmir as is evident in the findings of a paper published by Shakil Romshoo and Irfan Rashid. The authors of the paper have analysed that agricultural lands are getting converted into orchards mainly because a lower amount of water is required to grow fruit trees.

Athar Parvaiz is a journalist based in Srinagar. Views are personal.

This was first published in India Climate Dialogue.