Can agriculture be profitable and sustainable?

By collectively reviving a colonial-era irrigation system, farmers in 19 villages of Sinnar in Maharashtra have transformed a water-starved area into productive and prosperous farmlands 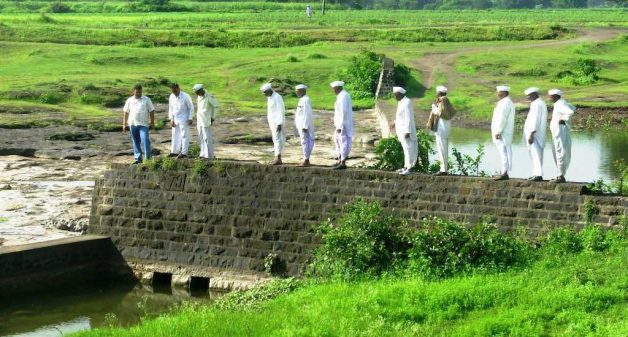 Falling agricultural income, accumulated power bills, spiraling farm loans, acute dependence on water tankers and the resultant migration to cities in search of livelihood are now referred to in the past tense in the 19 villages of Sinnar taluka in Maharashtra’s Nashik district, thanks to the unique participatory action of water management involving local farmers, an NGO, corporate donors and the state’s irrigation authorities.

Located on the NH 50 that connects Nashik with Pune, most would recognize Sinnar, as it happens to be on the way to Shirdi, the resting place of the 19th-century saint Sai Baba and a popular pilgrim center, both among Hindus and Muslims. Additionally, Sinnar hosts the Gondeswar temple, the most complete and the best-preserved example of the mediaeval temples of the Deccan of the Indo-Aryan style. In recent years, Asia’s first industrial estate established on a cooperative basis was established in Sinnar’s Musalgaon.

Traversing the 70 km long stretch of Dev River, a tributary of the Godavari originating from Dhondbar village, it courses through Sinnar and here one can witness a change of monumental proportions, bringing stability and prosperity to the farmers who till the 6,834 acres of land here.

But it was not always so in the years gone by. Like elsewhere in the country’s arid zone, Sinnar too encountered what the economists’ term as rural distress, which was unaffectedly addressed by the state by increasing the number of employment days under the rural employment guarantee scheme, declaring a subsidy on seeds, horticulture crops and fodder.

Largely dry and drought-prone with drinking water scarcity, Sinnar falls in the rain shadow region of the Western Ghats. It receives an average annual rainfall 616 mm but has seen a steady decline in the past 10 years. For instance, it was bare 382 mm in 2017. The area under food grains is 45% while in oilseeds it’s 16%. Over the years, vegetable cultivation has increased here.

Diverting rivers or streams to irrigate farms is an age-old practice in India. Diversion Based Irrigation (DBI) Systems is a simple and economical method that applies gravitational force to guide the flow of water from rivers and streams to adjacent fields. It is especially beneficial for hilly or mountainous terrains that are usually deprived of natural irrigation. 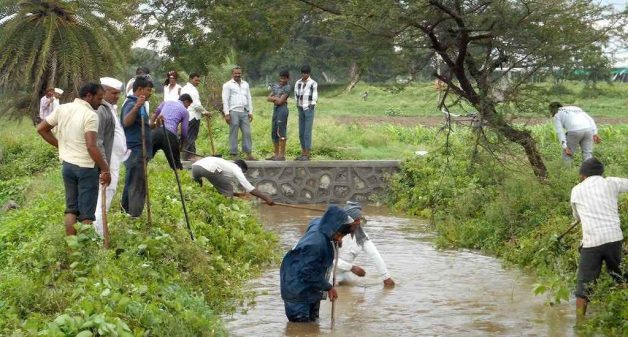 According to a 1912 document by British official C. M. Baker, the British constructed 296 diversion dams in Nashik district, out of which 47 check dams and diversion embankments were built in Sinnar from 1870 to 1895. Each dam had a canal, which was further divided into sub-canals to take water to farms. The gravitational flow ensured that water reached the tail end.

Dwelling on the DBI and its efficient running in the past, Sunil Pote of non-profit Yuva Mitra told VillageSquare.in: “The system was very efficient as village panchayat decided on the release of water according to the landholding of the farmer. A landholding’s irrigation requirement was based according to the plot size, soil conditions, the crop to be grown and the duration of flow of water to the fields. For instance, it took 24 minutes for a half-acre plot’s soil to dampen. Every farmer received his quota of water either on the seventh or thirteenth day depending on the crop he grew.”

Envisaged as a community-based water management system, it distributed water to almost 6,500 hectares land in 19 villages for a period of nine months. Besides irrigating the land, it also recharged the groundwater.

Over the years, these systems became non-functional due to lack of maintenance and repairs, the apathy of the state’s irrigation department beside encroachment of the river basin by the farmers. As people relinquished their right over existing water systems it not only affected their livelihoods but also brought in setbacks to the farmers lives like indebtedness, alcoholism, dependence and poor standard of living, which led to migration to the neighboring cities in search of menial jobs.

The writing on the wall was clear: the loss of community control over water resources was the root cause of the situation being encountered by the villagers.

In 1971, the Konambe dam came up on Dev River, which reduced the flow of water into the DBI system. By the mid-eighties, the British-built DBI systems in Sinnar, which met the requirement of drinking water and irrigation for nearly 90 years were totally abandoned.

As farmers in great numbers installed water pumps to irrigate their fields it brought the dubious distinction: of being the highest groundwater exploited taluka in Nashik district! Ecological degradation and loss of traditional water management system in combination with uncertain rainfall and unpredictable market situation resulted in partial loss of livelihood.

It was the three-day long Dev Nadi Shodh Yatra, or a grassroots inquiry march, undertaken by the local youths with the guidance of Yuva Mitra which began on May 15, 2007, with the purpose of studying the defunct water management system, pollution of the river and the biodiversity of the region brought in several revelations.

“An irrigation system which once catered to the irrigation needs of the farmers had accumulated silt over decades, encroachments had impeded the river’s flow, the river bank which earlier hosted trees like mango, custard apple, tamarind, neem, banyan and jamun now had weeds like besharam (Ipomoea carnea) kanher (yellow oleander), gultura (Lantena Camera) and others,” Nitin Shinde of Sonari village, who had joined the march, told VillageSquare.in. “Rodents had flourished in the absence of predators like snakes and peacocks which were found in abundance in the past. Natural scavengers like vultures had abandoned the region as wind energy towers came upon the neighboring hills.”

In the past, the check dams provided water till the month of March, but now by December, everything dried up. Increasing population, rising demand for water for irrigation and the depleting groundwater level compounded the problem. 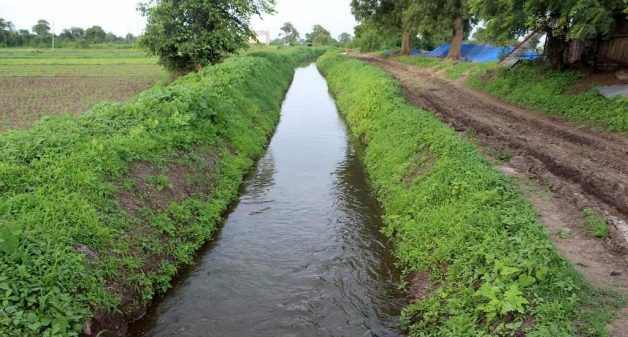 The community-driven activity with the Panchayat Samiti overseeing the release of water, selecting the crop and raising funds for the maintenance and repairs the check dams used to run effectively. As the state’s irrigation department took control of them, the farmers had no say about its functioning.

As power lines arrived in the villages in 1985, farmers increasingly installed agriculture pumps to draw water for irrigation, leading to the death knell of DBI systems. Visit these 20-odd villages and you’re still likely to come across stone and mortar made check dams with numbers inscribed on them like 74 or 90, each referring to the structure’s location and the village it belonged.

“In the initial years, the water didn’t reach the farm plots but the neighboring wells witnessed increased water level, which made the villagers realize that the situations could be reversed,” said Pote. “The brimming wells witnessed after a period of some three decades not only brought joy but instilled hope among the villagers.”

From 2009 to 2018, Yuva Mitra with the participation of the villagers desilted and renovated 18 check dams on Dev and Mhalungi rivers. Only when the job could not be done manually were earthmovers involved. The participation from the villagers was overwhelming with nearly Rs 17 lakh mobilized through community donation while the state government and other donor agencies contributed Rs. 289.36 lakh to repair the canals stretching 81 km and bringing 5,725.24 acres under irrigation, which has benefitted 2,985 odd farmers.

With the removal of silt the storage capacities of the irrigation systems have increased, hundreds of villagers, which were earlier dependent on water tankers are free of them and village-based water users associations have been formed with the aim to achieve equitable distribution of water. Farmers have been encouraged to use drip irrigation and mulching paper.

Radical concepts like 5R farming have been introduced in which vegetable crops like brinjal, spinach, cabbage, bitter gourd, pumpkin, broccoli, garlic, Chinese cabbage and fenugreek was grown in five gunthas (5,000 sq. ft) plot, which has resulted in increase in the annual produce of the farmers and also maintaining the soil health. So popular has been 5R farming in Sinnar that farmers in far away Latur and Wardha have become followers of the method.

Their livelihood secure, the farmers have become entrepreneurs with Yuva Mitra instrumental in forming four farmer producer companies (FPC) in these 19 villages, which are into activities ranging from the marketing of exotic vegetables to selling of live goats. For instance, Lonarwadi’s Devnadi Valley Agricultural Producers Company Ltd, an FPC which specializes in agri-input supply and marketing of vegetables and onion, had a turnover of Rs 1.14 crore in 2017-18.

“Not only do have secured our irrigation needs but our lands to have immensely benefitted by the silt removed from the check dams. We just have to pay the cost of diesel for ferrying the silt to our farm plots,” Sudam Avaji Kakkad of Vajhevaran village told VillageSquare.in.

Avaji’s plot of land is adjacent to check dam 82. He is a member of Vajhevaran Canal Water Users Association and grows groundnut, soybean and vegetables like beans and tomatoes on his 12-bigha plot while his neighbor, Hemant Vasant Jakhadi, a retiree from Nashik’s Hindustan Aircrafts Ltd who grows sweet corn and soybean.