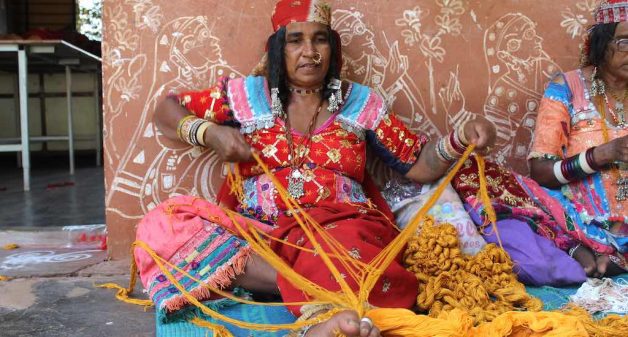 Lambani women such as Somi Bai, who prefer to wear their traditional phetiya-kanchali dress, are happy to keep their embroidery tradition alive (Photo by Amoolya Rajappa)

Sita Bai is the oldest among the group of Lambani women embroidering clothes at the Mahalaxmi Mirror and Embroidery Unit of Sandur Kushala Kala Kendra (SKKK), a non-profit organization promoting craft-based livelihoods. The 65-year-old’s hands move effortlessly, sewing stitches on a piece of white cloth, while her eyes keep a watch on her grandchildren playing nearby.

Kasuthi kelsa embroidery is unique to the Lambani community. In Karnataka, the 1.1 million Lambanis, listed as scheduled caste, are mostly concentrated in the arid, northern districts.

Called as Banjaras in some states, the semi-nomadic Lambani tribes are said to be descendants of the Arya Roma gypsies of Europe, who migrated through Central Asia and Afghanistan before arriving in the deserts of Rajasthan. Trading in salt and grains facilitated their move to southern states such as Karnataka.

Part of their exclusive bridal trousseau earlier, their embroidery work on bright handloom fabrics, embellished with intricate stitches, decorative applique, mirror and patchwork, is now part of modern day outfits and products. Though most of their thandas (villages) remain underdeveloped, it is their exquisite artisanship that has won the Lambani women recognition and helped them make a living.

It all began in 1984 in Sandur in Bellary district, when Mahalaxmi – the embroidery unit being named after her – a local school teacher, identified the finesse of Lambani embroidery and began working with a small group of women in the courtyard of her house.

M. Y. Ghorpade, former minister and member of the erstwhile royal family of Sandur, supported the initiative and established SKKK, to ensure better livelihood for the Lambani women. 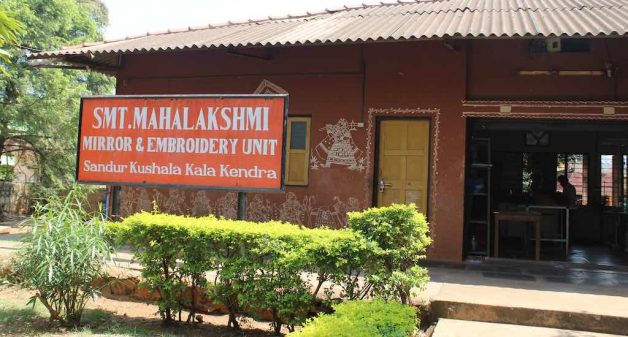 From a small beginning, the unit in Sandur has grown, employing more than 400 Lambani women who do traditional embroidery on modern outfits (Photo by Amoolya Rajappa)

“From a modest beginning of just five women, the unit has grown to generating employment for over 400 Lambani women in about 15 villages of Sandur,” R K Verma, secretary of SKKK told VillageSquare.in. “The women have the option of working from home, as there are supervisors in every village to monitor their work.”

According to 36-year-old Roohi Azam, consultant designer working with the Lambani women for over 10 years, the women were a little skeptical initially, to do their signature embroidery on modern outfits. “Now they acknowledge that it’s inevitable to cater to contemporary demands,” said Azam.

Azam finds the Sandur style of embroidery with vivid colors and the use of ornate embellishments like cowrie shells, beads, coins, mirrors and tassels distinctive. Veteran designers like Laila Tyabji and Laxmi Narayan, have helped integrate Sandur embroidery to new trends.

“It’s just the design of the clothing that changes with time, our embroidery stitches remain the same,” Gowri Bai told VillageSquare.in. The women embroider on a range of products (priced between Rs.70 – 4,000) such as kurtas, dupattas, bags, cushion covers, wall hangings and the like. Products with Lambani embroidery are exported to countries like USA, Netherlands and Japan.

Many elderly women like Sita Bai have been associated with the embroidery unit for more than two to three decades. Dressed in her traditional phetiya-kanchali dress (a baggy skirt and ornamental blouse), she finds the present generation of Lambani women having a preference for sarees. “They think our traditional dress is too heavy to wear every day and prefer it only on celebratory occasions,” she told VillageSquare.in.

Sita Bai’s daughter-in-law Laxmi Bai received four pairs of embroidered clothes from her parents when she got married. She wishes to continue the custom even if it involves several months of painstaking work. “Children in our community learn from us because we are doing it all the time,” said Laxmi, who now teaches the kasuthi work to her daughter-in-law. 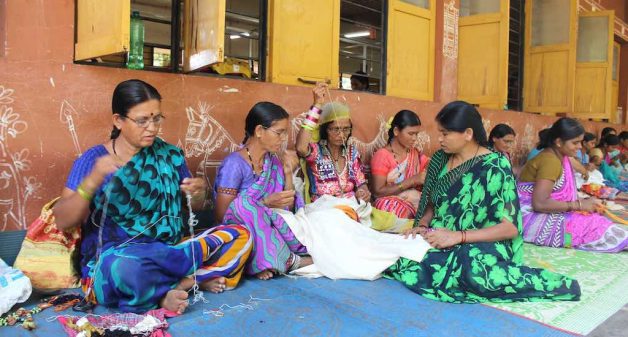 Gowri Bai (53), who has been wearing the traditional Lambani dress since she was 12, is among the handful of women who prefer to wear it every day. “Earlier we had to gift embroidered clothes to all the members of the groom’s family as wedding presents,” she told VillageSquare.in. “But today, our people just give it to the bride and distribute sarees to everyone else as it is cost effective.”

Having firsthand knowledge of all the 39 stiches involved in the Sandur embroidery, Shanti Bai supervises the work of other women and trains beginners. “It is sad that not everyone is keen on passing on the tradition to the next generation,” she told VillageSquare.in. “Others take up daily wage work and migrate for seasonal labor work.”

A majority of the women working at the unit are from Susheelanagar, where migration is common. “About 30% of men and women from our village are currently working in Mandya, Mysore and Davangere, cutting sugarcane,” said Gowri Bai.

Sakku Bai (56) takes care of her grandchildren as her sons and daughters-in-law have migrated for work. “We hardly make Rs 100-200 per day, whereas sugarcane cutting gets them about Rs 300-450,” she told VillageSquare.in.

“Sometimes it is profitable and sometimes it is not, but we stick to it because there is work to do through the year,” said Gowri Bai.

Working on a string of hand-made yellow knots, Gowri Bai said that she got to walk the ramp in London Fashion Week and participate in New Mexico’s Sante Fe Folk Art Market, a few years ago, because of their craft.

Gowri Bai recollected people abroad exclaiming how rich they must be to wear such expensive clothes every day. “We had to explain that we were indeed a tribe mostly dependent on daily wage labor and the dresses were just part of our tradition.”

Shanti Bai’s mastery of the Lambani embroidery has taken her across the globe. Shanti Bai and Gowri Bai have won national awards for their work. Sandur Lambani Embroidery also earned Geographical Indication tag in 2008.

“Many women were victims of domestic violence earlier,” Azam told VillageSquare.in. “The opportunity to earn a respectable livelihood has benefitted them and made them more independent.”

Azam feels that with migration for education and work, the craftsmanship is diminishing. “The challenge is to keep the craft alive while ensuring that the girls are adequately educated.” she said. “We also aim to break into newer markets.”

Verma said that they hold regular training sessions with government support, to preserve the craft.

For many like Gowri Bai, it is more than money that their embroidery has earned them. She recalled a time when Lambani women never ventured alone even to a nearby city. “Today, we are more self-aware, confident and well-travelled because of our embroidery,” Gowri Bai told VillageSquare.in. “I definitely do not want it to fade away.”