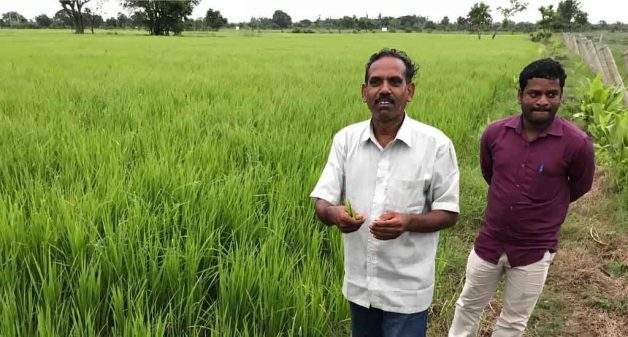 At 56, he now observes salinity in the soil and groundwater in his farmland that is about 20km from the coast. He and a group of friends have combined ownership over 20 acres of land in Kadagam village in Nannilam taluk of Tiruvarur district.

Inadequate rains and droughts have been leading to groundwater depletion in many coastal villages in Tamil Nadu. This has led to seawater intrusion and increased salinity levels in water and soil. Farmers tackle salinity through organic agricultural practices and some innovative measures.

The soil in and around Kadagam, including in Muthukrishnan’s farm, is clayey. Officials of Krishi Vigyan Kendra (KVK) admit that the salinity is making farming unsustainable. “If electrical conductivity (EC), which is an indicator of soil salinity and hence its health, is more than 4 deciSiemens/meter (dS/m), it would be difficult to grow any crop,” said a KVK official.

With current soil health statistics being not available, officials estimate EC to be around 7 dS/m. However, the farmers assert that they are growing crops successfully through organic practices.

To prepare the land, farmers advocate turning the farm into a livestock pen. Farmer Rajendran remembers this as a traditional practice, when pastoral herders used agricultural fields as pens after crops had been harvested. 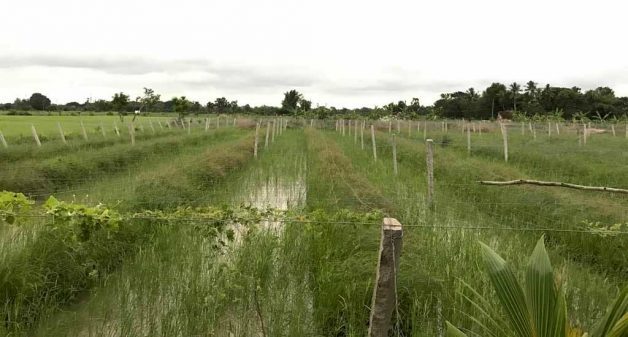 “We tie the goats in one section of the farm for a few days, then move them to another part of the land and so on, till the entire land is covered with the animals’ waste,” Muthukrishnan told VillageSquare.in. In places, where no pastoralists visit, farmers tie their cows in the field.

When tsunami hit the eastern coast of Tamil Nadu in 2004, the fields were filled with sea slush and caked with salt. Some farmers, guided by the late Nammalwar, an organic farming proponent, adopted organic practices and successfully reclaimed their land.

Farmers started green manure practice only after tsunami. While organic farmers generally grow dhaincha (Sesbania bispinosa) and sann hemp (Crotalaria juncea) and plough them into the soil when they flower, Muthukrishnan finds kolinji (Galega purpurea) most effective. “The other plants fix nitrogen and improve soil fertility, but kolinji removes salinity,” he said.

“Seeing the successful reversal of the situation after tsunami, I decided to practice only organic agriculture,” Tamilselvan, a farmer from Karaikal told VillageSquare.in. “Back then we learnt that plant waste and animal waste were the best solution to reclaim our land, and I am following the same practice.”

Tamilselvan digs trenches close to the bunds and fills them with leaf litter and pruned tree branches. “After tsunami, we dug pits and filled the pits with the branches of fallen trees. Only then I learnt that it was a traditional practice to nurture the soil with palm fronds and the like,” he said.

Muthukrishnan has also dug trenches in his farm, but uses them a little differently. He has set aside one acre to grow paddy and vine vegetables. The one-acre plot is lower by about 3’ than the rest of the farm. “It is almost like a pond, but he has formed 3’ high ridges at 12’ center-to-center intervals in the dug-out area,” said Prem Anand, an alternate medicine practitioner who has turned to organic farming recently, told VillageSquare.in. 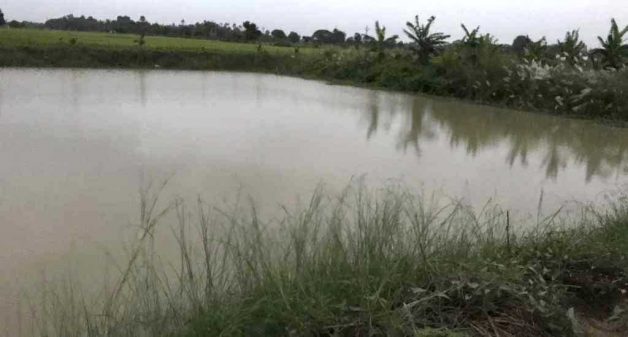 In Karaikal area, mid-August to mid-December is the monsoon season, lasting for about 120 days. When it rains, the trenches get filled. Muthukrishnan grows a 100-day traditional paddy variety in the trenches. The water inundated in the trenches helps paddy cultivation and counter salinity.

The weeds that grow on the ridges are ploughed back into the soil, after harvesting the paddy. The trenches measure four feet across, wide enough to plough using a hand-operated mini tractor.

A metal wire trellis atop 5’ high granite posts cover the plot. After the paddy is harvested Muthukrishnan grows vine vegetables such as, ridge gourd, bitter gourd and snake gourd along the ridges. “The ridges are spaced considering the length the vegetable vines grow to,” he said.

Farmers believe in retaining rainwater where it falls, to tackle salinity. In the 20-acre land, Muthukrishnan has five ponds to capture the rainwater. He has raised bunds on the perimeter of the land and also within the land, where sections are delineated according to crops and the level of water needed for irrigation.

“We grow turmeric and pulses such as black gram and green gram as bund crops,” Prem Anand told VillageSquare.in. “The bunds not only prevent surface runoff, but prevent leaching of salts, in case neighboring farmers do not practice organic farming.”

While Rajendran grows kuruvikar and kichili samba, Tamilselvan grows kuzhivedichan and poongar. According to Rajendran, even those who cannot fence livestock in their land, can reclaim and sustain their land by filling organic matter in trenches and allowing rainwater to soak into the ground.

Muthukrishnan reiterated that soil characteristics can be changed and agriculture can be made sustainable primarily by retaining rainwater where it falls and through organic practices. “With sea level rise and climate threats, soil salinity will always be a problem for those of us in coastal villages,” Rajendran told VillageSquare.in. “Only organic and traditional practices can see us through.”

This story was produced through a GIZ-CMS Media Fellowship.