The hilsa fishermen of Howrah district in West Bengal are struggling against declining catch, stiff competition from mechanized trawlers and non-traditional fishermen entering the lucrative occupation 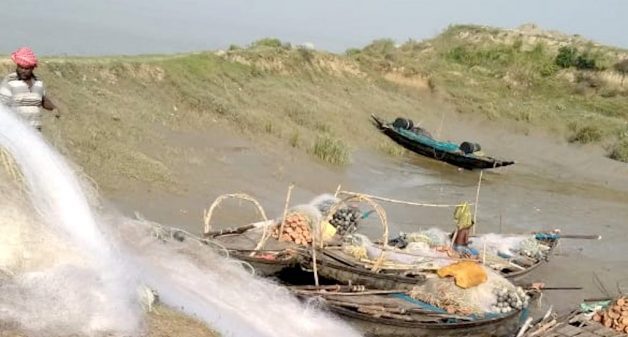 Fishermen getting ready to fish hilsa using their country boats, even as the declining fish population affects their livelihood (Photo by Dhruba Das Gupta)

Uttam Das, 32, and his two younger brothers of Chauliya village are hilsa (Tenualosa Ilisha) fishermen. In their village under Nakole panchayat in Shyampur II CD administrative block of Howrah district, there are three motorized boats, and 40 country boats engaged in hilsa fishing.

Das has been fishing in the Rupnarayan River since he was 12 years old. In the past 10 years, he has seen the catch decline steadily. “Now getting a good hilsa catch is like winning a lottery,” Das told VillageSquare.in.

Their fishing territory stretches from Kolaghat in Purba Medinipur district to Haldia Township, also in the same district. Fish population in Rupnarayan River that was famous for its high quality hilsa catch has been declining steadily, and riverine fishermen have been at the receiving end.

Hilsa belongs to the Clupeidae family, migrating to freshwater habitats for breeding. The juveniles migrate back to the estuary and sea. For about five months after hatching, the fish stay in the riverine stretch of about 523 km starting from Howrah and moving upstream up to Farakka barrage in Murshidabad district. The fish need 20 to 30 meter depth of freshwater for migration.

The hilsa fishermen get about six months to fish hilsa, considered a delicacy in West Bengal and Bangladesh. Mid-July to mid-September is the season for larger hilsa that fetch high prices. Mid-September to mid-October is the spawning season and there’s a ban on hilsa fishing.

They fish smaller-sized hilsa called khoka ilish from mid-January to mid-March. A typical hilsa fishing trip lasts between 10 and 20 days. During the peak hilsa fishing season, any two-cylinder motorized boat, accommodating up to eight men, or conventional country boat up to five men, will make about five trips to the river.

Members of the Rupnarayan Nad Matsyajibi Union (Rupnarayan River fishermen’s union) said that indiscriminate fishing by marine hilsa fishermen in high-powered mechanized boats with 6 or 7 cylinder engines was the reason for the declining fish population. 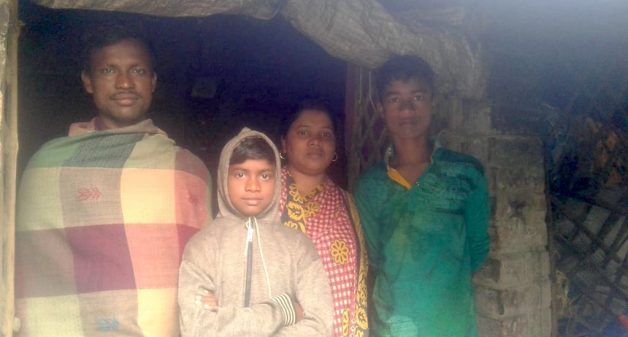 Fisherman Uttam Das, who has been fishing hilsa in Rupnarayan River for 20 years, sees the impact of indiscriminate fishing in his fish catch (Photo by Dhruba Das Gupta)

“There are also bottom trawlers in the sea with 1,000 feet nets that scour the sea bottom and amass enormous harvests of not just the hilsa, but also other fish including juveniles,” marine scientist Amalesh Chaudhuri told VillageSquare.in. “This is ecologically extremely destructive.”

The year 2010 saw a bumper hilsa catch in the foreshore seas, leading to a rush for marine hilsa in the years that followed. This also led to indiscriminate harvesting of hilsa downstream, affecting the upstream catch. Total catch figures over the years show a widening gap between inland and marine catch.

The West Bengal government announced a ban in 2013. This meant the need for planning for alternative livelihood for hilsa fishermen, especially those in the riverine stretch. This stretch includes the districts of Malda, Murshidabad, Nadia, Bardhaman, Hooghly, Howrah, Purba Medinipur, North 24 Parganas and South 24 Parganas districts.

Other aspects of the ban include ban on catching, marketing, transportation and possessing juveniles less than 23 cm in length, ban on using monofilament gill nets having mesh size less than 90mm, ban on bottom trawling within 12 nautical miles of the continental shelf, ban on putting up bag nets, scoop nets and small meshed gill nets along the migratory route during February to April and complete ban on fishing within 5 sq. km of Farakka barrage.

In addition, the spawning areas have been declared as sanctuaries to facilitate spawning. “This enforcement has to be gradual because of the human aspect and the economic issues involved,” said Biswas.

Ban period and beyond

During a normal fishing season for full-sized hilsa, a motorized or a country boat will harvest about Rs 4 lakh worth of fish. Those fishing in Rupnarayan said that during a good season, this might go up by another Rs 2 lakh.

“Since this stretch of the river does not have a sizeable hilsa population, police do not pay much attention to it,” Das told VillageSquare.in. “Their focus is on big landing centers such as Diamond Harbor.” 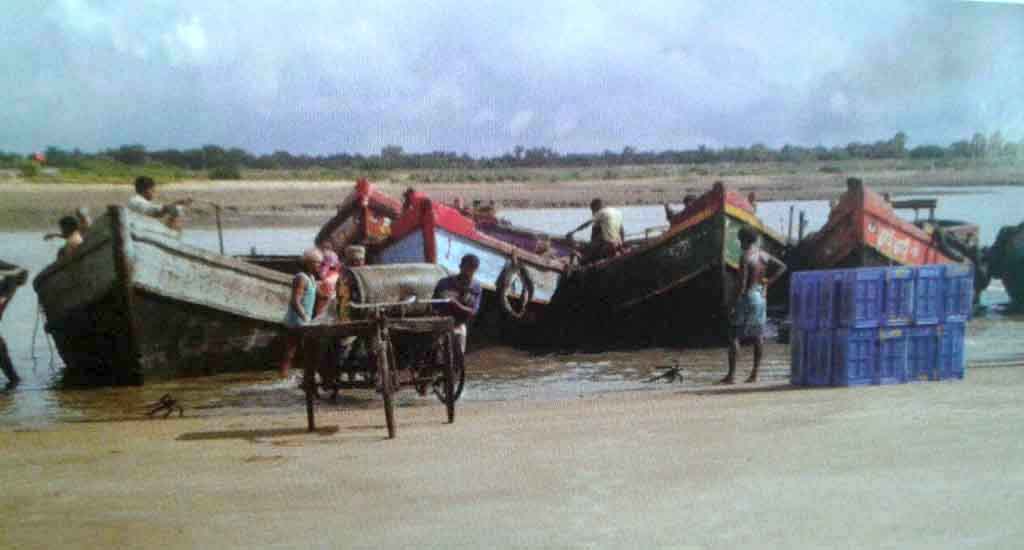 Mechanized boats at a landing center. These boats pose a threat to the livelihoods of riverine fishermen (Photo by Dhruba Das Gupta)

Even then, managing to get a good fish catch can be difficult. To minimize losses, most of the fishermen in Nakole — and the six villages under the panchayat — fish jointly. Uttam Das and his brothers fish together, pooling their resources, and dividing the profits.

After the fishing season, the fishers cultivate their own plots of land for their yearly quota of consumable rice, work as contractual agricultural labor in others’ rice fields or work in brick kilns bordering Rupnarayan.

“The last one is hardly an alternative, because brick kilns work on a 5-month labor contract and they do not want us, since our fishing activities would resume after two months,” Prahlad Das of Henre village in Nakole panchayat, told VillageSquare.in. “This impacts our overall economic condition.”

If the catch is unsatisfactory, Uttam Das and his brothers go up to the Hooghly estuary. The strength of their engines, size of boats as well as compulsion to offload the catch within a stipulated time, limit their operating space and time, and hence the catch size.

Within the river stretch, competition is intense. Since hilsa is found over a wide river stretch and is not confined to any place, many fishermen are engaged in catching it.

Chaudhuri, who served as an advisor to a World Wildlife Fund – International Union for Conservation of Nature (WWF-IUCN) 2014 study on sustainable livelihood strategies for fishermen communities during hilsa fishing ban period in West Bengal, 2014, said that fishing space is occupied by those from other livelihood background. “Erstwhile cultivators have replaced artisanal fishermen in the rivers,” he said.

With the fishing space so crowded and the catch uncertain, respecting restrictions on the size of the fishing net or the ban on catching small-sized hilsa becomes a real challenge. The Department of Fisheries, West Bengal, started a livelihood scheme in 2013-14, there are several difficulties in implementation.

It envisaged creating fish vending units for affected fishermen. The unit consisted of a cycle, an insulated fish box, a fish cutter, weighing scales and a one-time financial help of Rs 500-1000 to buy fish.

“The livelihood scheme and its implementation are misdirected,” Milan Das of the Dakshinbanga Matsyajibi Forum, a non-party fishermen’s union with several hilsa fishermen members told VillageSquare.in. “The scheme is unsuitable for those fishing in the river.”

Besides, the total number of hilsa fishermen has not been ascertained. The department has contractually engaged 30 data collectors to collect data about fish catch and the number of fishermen who depend on hilsa for a livelihood. But the data is not yet available in the public domain.

The fishermen charge that the vending units given to the panchayats were distributed to those who are not engaged in Hilsa fishing at all. “Fishermen’s associations should have been consulted to identify actual fishers and only then the units should have been distributed,” said Milan Das.

“So today we have desperate fishermen venturing out to fish despite the ban, and getting caught by the authorities,” Milan Das told VillageSquare.in. “The scheme is of little benefit at present.”