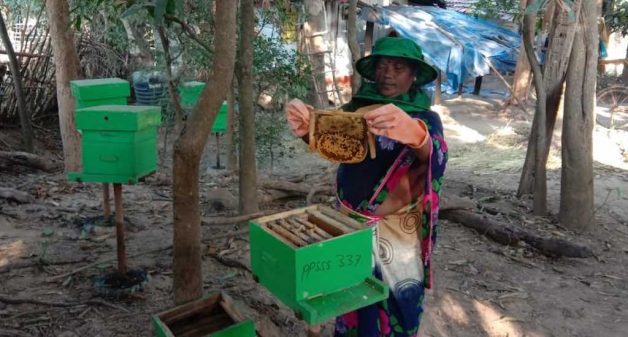 The tribal hamlet of Badekamili is 30km from Dantewada in Chhattisgarh. It is a village of 430-odd dwellings existing in harmony with a forest that has a lot of sal, mahua, karanj, kullu, banyan and neem trees. The villagers consider the trees not only as provider of livelihood but also as protector from eventualities.

Located in the foothills of iron-ore rich Bailadila mountain range, Badekamili, though known as a model village, is far from it. The Dhankhni River flowing through the village is highly polluted due to iron ore mining and unfit for any purpose, not even to raise crops.

The situation is similar in eight other villages, where the groundwater was found to have excess iron content. The villagers wait for the monsoons anxiously to grow rice and, at times, vegetables. Tribal women grow bees, supplementing their meager income from agriculture or non-timber forest produce.

The lush green Dandakaranya forest and the serene streams belie the living conditions of the tribes. Longstanding Maoist violence, state repression, excavation of resources by state and corporate entities, environmental degradation and the continuing exploitation of the Adivasis have pushed the Gond, Halba, Muria, Raut, Dhakad and Tilanga tribes to the edge.

The abundant resources in the forest spread over 1,710ha make it a major source of livelihood. In order to sustain their living, the tribes collect a variety of forest produce, such as sal seeds, chironge, tendu leaf, mahua flowers and seeds, tamarind, mango kernels, bamboo, gums, lac and tubers.

The government earned approximately Rs 578.28 crore royalty from mining companies and Rs 14 lakh from sand mines in 2015-2016. However, Dantewada continues to be one of the poorest districts in the country. 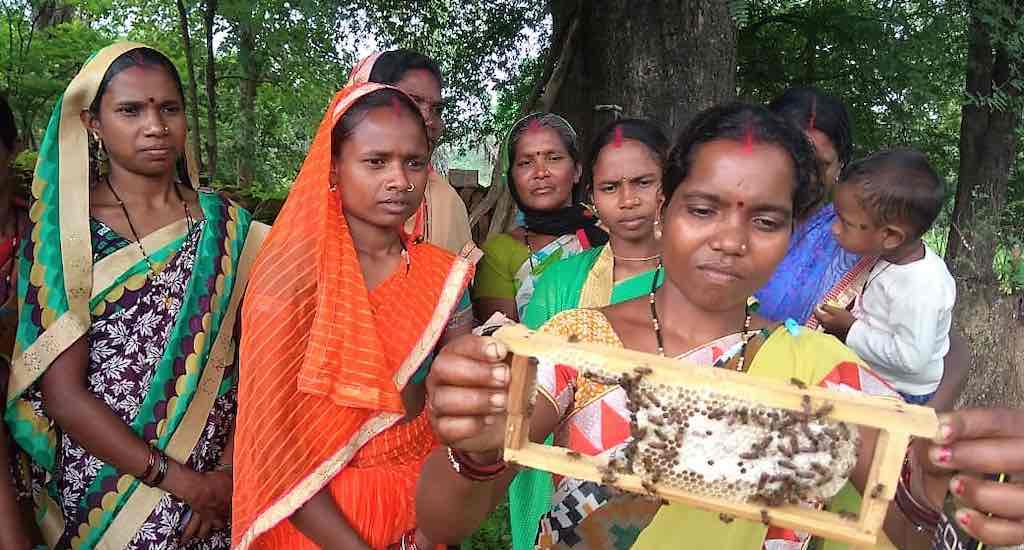 Standing in front of her mud-walled, tile-roofed house, the mother of two said that she was waiting for another kind of harvest that will happen in mid-March: honey. The five beehives gifted by a non-governmental organization (NGO), in an effort to enhance the livelihood of tribes, have sweetened the life of Tamo, helping her generate additional income for her family.

“Beekeeping has come as a boon to us. We sell our honey to the sanstha (organization) and they pay us immediately,” Tamo, a Halba tribe, told VillageSquare.in. “Moreover, we have stopped buying bottled honey from the shop which we used to buy, to cure cold and cough.”

Tribes living close to the forest have traditionally been honey collectors but rarely practiced captive beekeeping. “The tribes have been collecting honey, but in the process destroyed the hives,” Ram Narendra of Pragati Prayas Samajik Sewa Sanstha (PPSSS), referred to as Sanstha by villagers, an NGO involved in livelihood enhancement activities among the Dantewada tribes since 2003, told VillageSquare.in.

PPSSS convinced Apoorva B.V. of Bengaluru-based HoneyDay Bee Farms to train the tribes in apiary. “Apoorva has been visiting us regularly since we introduced beekeeping among women self-help groups, who took to beekeeping with more enthusiasm than men,” said Narendra.

In October 2017, Apoorva drove to Dantewada from Bengaluru, carrying 50 boxes of Apis cerana indica colonies. “We covered the 1,290km by driving at dusk, since bee colonies can be transported only during nights,” said Apoorva. The Dantewada district authorities, led by collector Saurabh Kumar have been supportive of the apiculture project. Dantewada-based Livelihood College incubates and funds the project.

Like Mangala Tamo, there are close to 80 tribal women – mostly of Gond and Halba tribes – spread in nearly 25 villages in Dantewada who have taken up beekeeping, joining the sweet revolution. Encouraged by their success, more women are taking to beekeeping as word goes around. 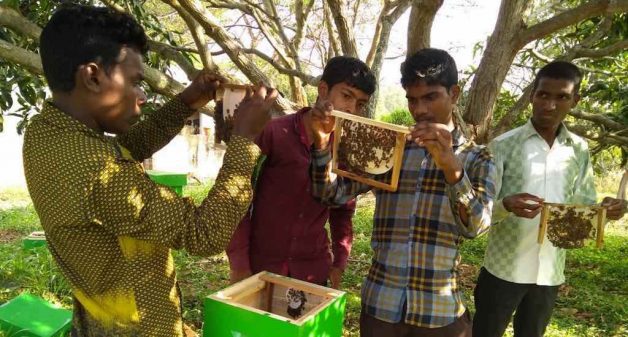 Initially, toddy collectors resisted the initiative as bees forage the sap collected in pots hung for tapping toddy. When they witnessed the number of bees in the captive colonies increasing and realized the importance of pollination, they also took to beekeeping voluntarily.

As the tribal communities required a sustainable model, the native variety of honeybees, Apis cerana indica, was chosen. The honey collected from the wild is made by Apis dorsata. “We didn’t consider Apis mellifera, the Italian variety, for various practical reasons,” Apoorva told VillageSquare.in. “Also, if a bee colony deserted the box, the skill of ‘hiving’ could enable people to transfer natural colonies to the boxes.”

In 2017, PPSSS collected five tons of honey and has even branded the product as Bastar Honey, recipients of which include dignitaries like the president and prime minister, who were gifted bottles during their visits to Dantewada.

Mudde Tamo (42) of Badekamili village, who has 20 boxes and has had a harvest of 40kg, said that they receive Rs 300 per kg of honey sold to PPSSS. “Our forefathers never thought of beekeeping and collected honey from the wild,” Mudde Tamo told VillageSquare.in. “We are fortunate that we could get into beekeeping; it has increased the yield of paddy and vegetables.”

PPSSS and HoneyDay have so far distributed over 450 boxes among the tribes. In an effort to reach more families, four tribal youth from Kawalnar village, 8 km from Dantewada, are undergoing training at HoneyDay in Bengaluru. “Once they return from their two-month training, we will be able to reach more families,” said Narendra, a postgraduate in sociology and a tribal from village Chitalanka.