Faced with a shortage of cattle feed, farmers in several districts of Tamil Nadu have adopted offbeat solutions that not only bring feeding costs down but also increase the yields of milk 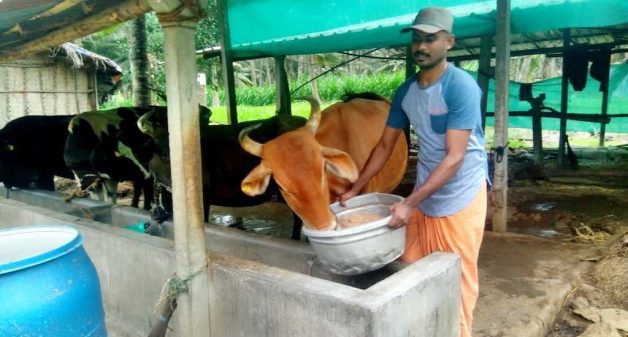 The treasure of a house is a cow and the treasure of a garden is moringa, goes a well-known Tamil proverb. Like the rest of India, cows are revered in rural Tamil Nadu. There’s even a separate festival called maatu pongal that celebrates their contribution to agriculture and mankind.

But with over 99.95 lakh cattle in Tamil Nadu, feeding them has become a practical challenge. Currently, India has only 4% of its cropping area under fodder cultivation. In fact, studies show that the country will see a deficit of 65% for green animal fodder and 25% for dry fodder by the year 2025.

While fodder shortage and increasing cost of fodder has led to large-scale distress selling of cattle across India, some farmers in Tamil Nadu are reinventing the way their cattle are fed.

Cattle are normally fed green fodder, dry fodder and concentrated feed. The homemade or commercial concentrated feed has a mixture of grains, brans, minerals and vitamins. Kalaiarasan S. (37), a dairy farmer from Thirukannur village near Pondicherry has been able to cut down on the cost of concentrated feed by buying brewer’s waste from nearby breweries.

“While commercial feeds are priced at Rs. 20 per kg, brewery waste can be bought for as low as Rs 6 per kg,” Kalaiarasan told VillageSquare.in. “When I replace about 30% cattle feed with brewer’s waste, I get around 20% more milk.” With over 50 cows under his care, he said that using the protein-rich brewer’s waste along with greens, bran and commercial concentrate has boosted milk productivity.

However, Senthilkumar S., assistant professor at Veterinary College and Research Institute, Namakkal said that brewery waste has a shelf life of 7 to 10 days. “If it is used later, it might induce fungal growth and the cattle feeding on it could pass on mycotoxins to the milk they produce,” he told VillageSquare.in. “Also, using brewer’s waste makes sense only when there’s a brewery in the neighborhood.”

Gnanasekaran (26) from Meenakshipuram in Coimbatore district is constantly on the lookout for healthier feeds for his cows. So, when he heard that powdered pods of wildly available mesquite trees could be used as nutritious feed, he decided to try it. 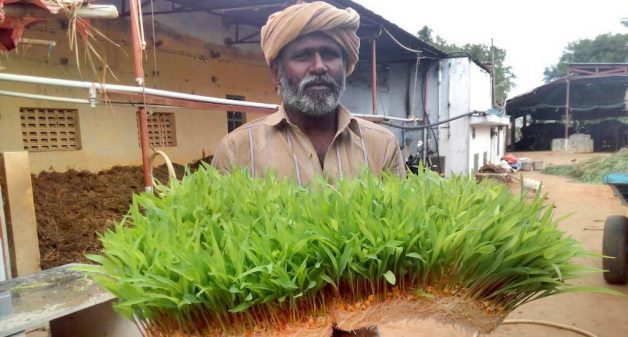 “I got samples from Krishi Vigyan Kendra (KVK), Thoothukudi and I found my cows were healthier after feeding on them,” Gnanasekaran told VillageSquare.in. “This feed is cheaper and milk production also increased by at least one liter per cow.”

In Thoothukudi district, farmers are generally wary of mesquite trees as they are considered weeds in farmlands and are believed to absorb groundwater. Srinivasan V., senior scientist, KVK, Thoothukudi explained how they took advantage of this invasive wasteland tree to benefit dairy farmers.

“Normally farmers cut down these trees but their pods could be used as an alternative nutritious feed for animals. If the cattle eat them as such then it might result in more propagation of mesquite trees, so we did a trial through Indian Council of Agricultural Research (ICAR) in 2014,” said Srinivasan.

The scientists asked cultivators to dry the pods, and grind them. They were able to sell about 30 tons of mesquite feed to dairy farmers. “As these trees are widely available, the cost of cattle feed comes down,” said Srinivasan. “Milk productivity also increases by 10%.” While farmers who collected the pod were paid Rs 150 for three hours of work, cattle owners were able to save up to Rs 5 a kg on cattle feed.

Azolla, a water fern, has become another popular choice for dairy farmers in Tamil Nadu. Jaganthan. K (68) from Karuppur village in Salem district is a recent convert. “Six months back, Dr Jayanthi introduced Azolla to me through a National Bank for Agriculture and Rural Development (NABARD) scheme,” said Jaganathan.

Jaganathan’s mentor Jayanthi, Veterinary University Training and Research Center, said, “In a 6 x 3 feet tarpaulin sheet with 1 foot depth, you can grow Azolla within days. The setup will cost only around Rs 600.” According to her, Azolla might see reduced growth during peak summer and hence is better grown in shade.

“Azolla is a boon for dairy farmers like me who have no grazing land,” Jaganathan told VillageSquare.in. “Not only are my six cows more healthy, Azolla has reduced my feed cost by more than 30%.”

Tamil Nadu state government has also been aggressively promoting Azolla. According to the Animal Husbandry Policy Note 2018-19, a total of 30,958 Azolla units have been established in Tamil Nadu, for which inputs are provided free of cost. 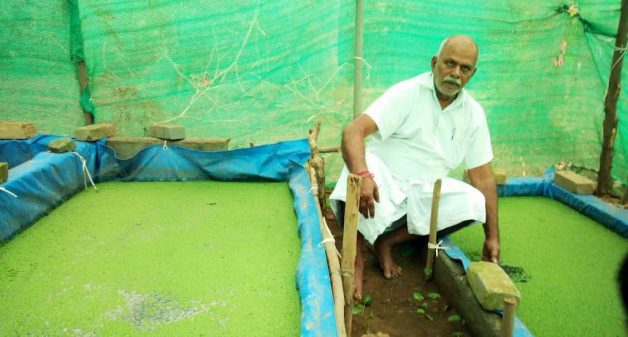 Even though azolla has recently gained prominence in India, it has been used by the Chinese as a green manure for centuries and is known for its nitrogen-fixing properties. Farmer Thiruvankatam of Perumpathi village in Coimbatore district has successfully translated this in his farm by intercropping coconut and azolla. “This serves the twin purpose of fertilizing my trees and also producing feed for my cattle,” he said.

In 2008, 25 farmers from Thiruvankatam’s village formed a club to work together to increase profits and decrease input costs. They have been experimenting with green fodder varieties such as CO4 and CO5 promoted by the state government. With over 1,000 farmers now, Thiruvankatam said that they have scaled up their milk production from 150 liters to 1500 liters.

Sethu R. (38) of Annam Farms in Madurantakam, Kancheepuram district believes in integrated farming as the only sustainable way of producing good quality organic milk. From growing fodder crops CO4, Co5 in the border to doubling up cash crops, he said that dairy and farming complement each other. “When my cows graze, they add manure to my land. Agricultural excess like sesame oil cake is also fed to the cattle.”

Another recent addition to combat fodder shortage is the hydroponic fodder cultivation. According to the policy note, a total of 1,100 such units have been established in the state, for which 75% subsidy has been provided.

Jaikumar (47), a dairy farmer from Silamarathupatti, Theni district swears by hydroponic farming during drought season. He has been using it for nearly seven years. Setting it up costs around Rs 36,000.

“With very little water and land, a hydroponic setup can yield nutritious fodder,” Jaikumar told VillageSquare.in. “The feed costs as low as Rs 2 per kg and is extremely protein rich.” Though it cannot replace green fodder, it remains a good way to supplement feeds during extreme weather conditions.

Tamil Nadu dairy farmers are working in tandem with the government and local resources to give the best for their cows and in turn to consumers.