As impacts of climate change and unwise human interventions push traditional farmers in Uttarakhand to the wall, they are adapting by embracing new crops and livelihoods 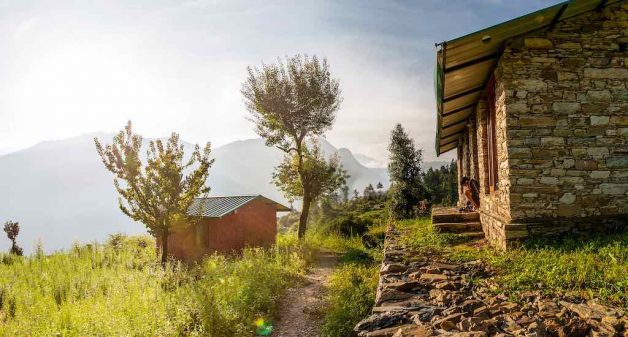 With his boyish grin, 28-year-old Anil Chand is a popular man in the village of Jadipani in Tehri Garhwal. Not only do people know him well because he is a local boy but also because of how he explains things to them: how apple trees just don’t seem to be sprouting fruit like they did and why peach is their new answer. Or for that matter why shifting of pea sowing from February to November and cabbages from November to March-April is a better idea.

“The climate here, like in most places is changing and changing fast. We have to move according to this change. I try and convince as many farmers as I can to understand this change and adapt. Of course it is not always easy but yes, even if two get convinced and change, the next year, the ones who didn’t, see the crop and want to change the sowing time or think of changing the crop.”

Jadipani — in what was once popular as the Mussoorie-Chamba fruit belt — is facing a tough challenge. The famous apple crop has been hit hard due to climate change. Other crops, such as vegetables mostly grown for personal consumption, have also taken a hit.

A small push for change

Chand works with Himmothan, an NGO initiated by the Tata Trusts in 2001, to work with several villages in Uttarakhand. The NGO is working to help people adapt to these changes, which is crucial to the survival of his village, and many like it.

Anjana Negi is happy she agreed to the suggested changes. “Not only did we get a good crop of cabbage because of early sowing but also got more cabbages as we were told to try row sowing. It was different from how we generally scattered the seeds.” Another change is trying a new crop — spring onions.  “My mother-in-law is convinced they won’t grow. But they seem to be doing okay as of now. I am keeping my fingers crossed,” she chuckles.

The big shift has been in the fruits. The apple trees might not be sprouting enough apples but a good number of villagers have tried moving to peaches. Khushi Ram Dabral a 39-year-old farmer in the village of Churaildhar, a stone’s throw away from Jadipani, sold peaches worth Rs 70,000 in the summer of 2016. “It was an awful sight to see my apple trees dry up over the years. The suggestion to try peach came as a savior,” he smiled, showing his peach trees like a proud parent.

Ganesh Bisht, a local villager who heads Himmothan’s initiative in the fruit belt, is happy the numbers of people like Dabral is growing. “Adaptation is crucial and we are glad the 60 SHGs (Self Help Groups) in 15 villages here are slowly but surely embracing the changes. From trying Napier grass (an evergreen variety that survives throughout the year) for their cattle to line sowing to learning work at a dairy opened in the village, they are doing it all.”

Change for the better

About eight kilometers from Joshimath is the picturesque village of Badgaon in Chamoli district. The evening sun lights up the faces of a group of women sitting on the cemented roof of a house, not too far from a ribbon-like road. Perfect rows of vegetables can be seen in the backdrop. The tikaas on their forehead tell you they’ve all just been at a religious function. There is laughter, there are jokes. It looks as perfect as village life can.

But things were not as rosy a few years ago, 75-year-old Usha Rani Kamdi said. “This entire belt was known for apples, khubani (peaches), chulu (wild peach), and alubukhara (apricot). And when we got several feet of snow, our fruits only grew sweeter.”

Aithi Devi joins in while attending to a naughty grandchild. “I still remember when I’d got married and came here, I remember seeing several feet of snow. Sometimes it would be up to our knees and sometimes we couldn’t open doors till we removed the snow with our spades.”

Those days of snow are far gone. “We saw our trees dry up and our incomes following them. Those were difficult times. We just didn’t know what to do. Fruits are what we’d planted for years and here we were, clueless of how else we’d survive,” says Vinod Singh Bhandari, from a group of men smoking bidi, not too far away.

A visit changed much. “It was a decade back. They were experts from Auli and they went around telling farmers how to grow different things. And that’s when they told us to start growing vegetables as the weather was changing in our village, like in several other villages; that we should try growing cauliflower, cabbage, coriander and rai (a variety of green vegetable). Of course we were apprehensive but we weren’t gaining anything from our fruits anyway,” said Usha Rani Kamdi, the oldest and the most talkative of the lot.

It started with a few farmers who thought it was worth taking a risk. “We had nothing to lose, did we? The snowfall was erratic; a traditional water source was not flowing as well as it did.  We had to do something if we wanted to be living happily with our families in the village. The other option was to just go to the cities looking for odd jobs. I decided to try growing what the expert team had suggested,” said 35-year-old Rajeshwari Devi.

A few months later when the cauliflowers grew to a perfect size and the cabbage became tightly plump, other farmers were inspired. And that was the beginning of change in the beautiful village of Badgaon, today known as one of best vegetable suppliers in the area.

“We grow about three quintals (a quintal is 100 kilograms) of cauliflower and cabbage. It would have gone up to six quintals if we didn’t have to deal with pigs digging up our vegetables. But yes, we still have enough to use it for ourselves and sell in the sabzi mandi (wholesale vegetable market). And since our vegetables are so good, we also get decent rates,” says Shailaja Bhatt, a teenager who has been listening to the conversation.

As we head further down the road, we reach our next destination. Kundi Khola, another scenic village. There is maize; lemons and perfectly orange kinu (a variety of orange common in the hills). There is lush grass (to feed cattle), tiny white flowers of ogal (a local plant used for flour), and some fields of wheat.

The village looks unusually quiet. An old lady is carefully sifting whole red chillis left to get crisp in the sun. “See they are covered with dust from the dam again,” she said.

When finally convinced to speak, 80-year-old Sureshi Devi said, “We are trying to fight the situation we were put in. First our water source dried up after the work at the dam began on Vishnu Gaad (one of the many hydropower dams being built in Uttarakhand). This also explains the muck and dust on everything. And if that wasn’t bad enough, things that grew in our village easily over the year — potatoes, pears, apples, rajma (kidney beans), almost all of them stopped growing. We started newer things here. We have cattle, and we mostly grow grass and citrus trees. And thanks to all this, the number of wild pigs here that dig our crops out has also gone down.”

Between climate change and human interventions, the villagers had to look for a solution. Farmer Puskar Singh puts it simply, “We had the choice of fleeing our village and go looking for work, or to work around the situation. We decided to choose the latter. We are after all ancestral farmers and there is nothing we can do better than farming. About two years back I decided to try growing kinu and lemons since apple weren’t growing.”

When the experiment worked several other farmers followed.

Today almost all the 150 families in the village own at least three kinu trees and plan to have more, added Vishweshwar Prasad Semwal, another farmer. This year Singh also tried experimenting with pomegranate.

Another change that has turned the life around for most families is the village’s shift towards dairy farming, says 72-year-old Kalpeshwari Semwal while she walks to her cow shed to show me her two cows and a new born calf, .

“Each family has one if not more cows. Since irrigation water was becoming an issue, we started growing grass for the cattle. And since they are eating well, they are giving milk. We are selling this milk at Rs 35-40 ($0.49-0.56) per litre,” she said, running her hand lovingly over the new born calf.

Not too far away from Semwal’s shed is that of Jhuppa Devi. “These animals have given us a fresh lease of life” she said with a wide grin.

Prachi is a freelance journalist. Views are personal.

This article was first published in the Third Pole.

Prachi is a freelance journalist.