A school in Pune has got a rural community together to cultivate indigenous rice, millets and pulses, and helps them market the native varieties in order to conserve and propagate them 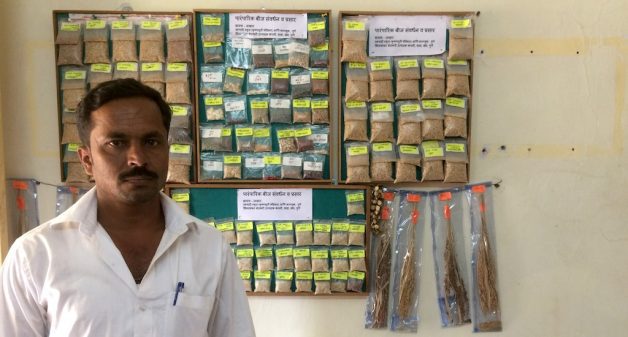 Ramdas Landage, a 35-year-old farmer from Gundalwadi village near Bhimashankar Sanctuary near Pune, cultivated 300 kg of indigenous seeds of over 18 varieties of paddy and millets this year. The varieties had become rare. The farmers in the region have been cultivating hybrid varieties for many years.

But this year, over 20 farmers from Gundalwadi and nearby villages cultivated 50 varieties of indigenous seeds and harvested over 8 tons. The farmers have joined hands with a local residential school to grow and conserve indigenous varieties of crops.

Sahyadri School run by Krishnamurti Foundation of India at Rajgurunagar near Pune is a residential school, known for its unique aspects such as not conducting exams till class VIII. The rural outreach department of the school runs projects such as the present one of propagating indigenous seeds, involving local communities.

Keeping the environment, besides health of people and soil in view, the school administration decided to encourage farmers to grow and conserve indigenous varieties. Local farmers revealed that they were growing hybrid varieties of crops and did not have indigenous seeds.

“We contacted an NGO that has been growing and conserving indigenous seeds,” Dipa More, the head of rural outreach department told VillageSquare.in. “The NGO had also been struggling to get seeds, yet they shared most of the 37 varieties that included paddy, millets and pulses.”

Ramdas Landage of Gundalwadi volunteered about 0.25 acre of his land to grow these rare varieties. More said, “Generally farmers believe that indigenous seeds don’t give much yield like that of hybrid ones. Hence they are reluctant to waste time, money and land on indigenous varieties.” 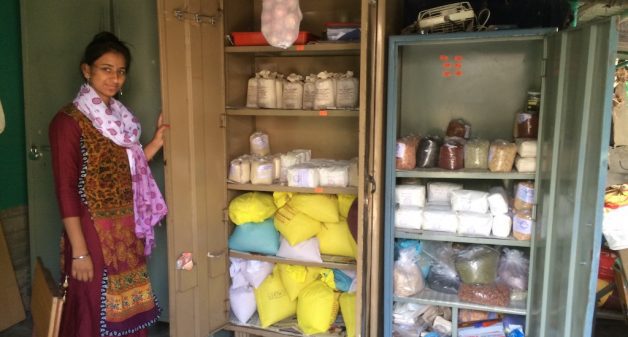 Kajal Kobal at the sales counter at school, where indigenous seeds and rice are available for sale (Photo by Varsha Torgalkar)

“Since I have been doing organic farming and have been listening to effects of climate change and other environmental issues I decided to volunteer,” Landage told VillageSquare.in. “I own 10 acres and I just gave one small patch of it, where we cultivated 30-odd varieties with the help of the school and nearby farmers in first year in 2016-17.”

“We got satisfactory result in our first attempt as we could get overall production of about 700 kg of all varieties, which meant about 25 kg of each variety, since we had sown about 300kg,” said More. The next year, four more farmers came forward to experiment with the traditional seeds. Last year the production was two tons of 50 varieties. That meant they could grow 100 kg of each variety of indigenous seeds.

More said, “Farmers numbering about 25 have produced more than 4 tons and they have already started to sell their produce to our school. This year total production is more than 8 tons.”

When Ayush Prasad, assistant collector of Pune (Khed area) came to know about the project, he visited the school and convinced local tribes around Bhimashankar area to use the seeds this year. “Unfortunately tribes also stopped using indigenous seeds a long ago and have been cultivating hybrid seeds only,” Prasad told VillageSquare.in. “It was difficult to convince them, as they felt that the yield might be less.”

Now more than 200 families have started sowing indigenous seeds in small patches of their farms. They expect production of about 4 tons.

Now the outreach department of the school has begun to sell the indigenous seeds under the brand Adidhanya Heritage of India. They pack one kg of rice, millets and all varieties of indigenous seeds in cloth bags and put up stalls at exhibitions, so as to sell the seeds and encourage more farmers to cultivate and conserve them.

There is a sales counter at the school too. Kajal Kobal, the daughter of a farmer in Gundalwadi and a postgraduate in commerce, works as an accountant at the sales counter of the school. “I was not interested in farming initially, but I am learning about it now.” 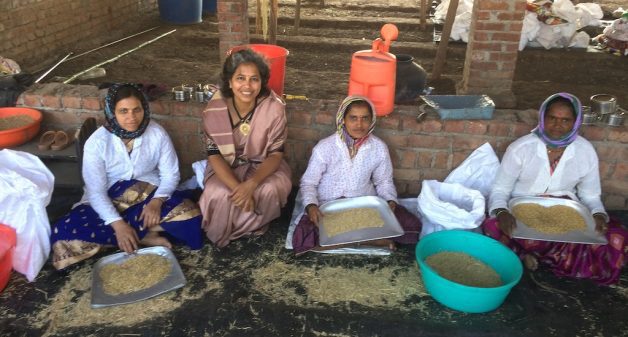 Many girls and women from nearby villages volunteer at the school to clean the seeds, and pack and label them. “They are getting exposed to marketing techniques, the importance of good packaging and the like,” said Kobal.

“Parents of students who visit the school have become our customers,” said More. The school buys rice and vegetables from farmers, through the outreach department. According to More, the demand is more than the production from the pool of farmers.

“In my farm I cultivated seven varieties of rice and observed that they don’t require much water,” Shaila Kadam, a lady farmer, sorting out recently harvested paddy at a section of the rural outreach department, told VillageSquare.in. “Besides we don’t spend much as we use only natural fertilizers and pesticides made from animal and farm waste.”

Kadam and over 10 ladies work at this department, cleaning the produce, sorting them, observing the features of the produce and keeping records of the same. “We record the height, color and size of crops,” Bhagirathi Pingat, another farmer who works at the school, told VillageSquare.in. “We also note the time that every variety takes to grow, for flowering and for producing grains.”

With increasing demand for the traditional grains, the outreach department plans to rope in more farmers to produce and conserve the indigenous varieties. They promise to buy their produce at good rates, as there are many customers ready to buy. “We want to reach at least 10 more villages next year,” said More.