Despite falling demand, applique craftsmen and traders of Pipli in Odisha are trying to ensure that their handicraft evolves to satisfy changing aesthetic needs, with hopes for a better future 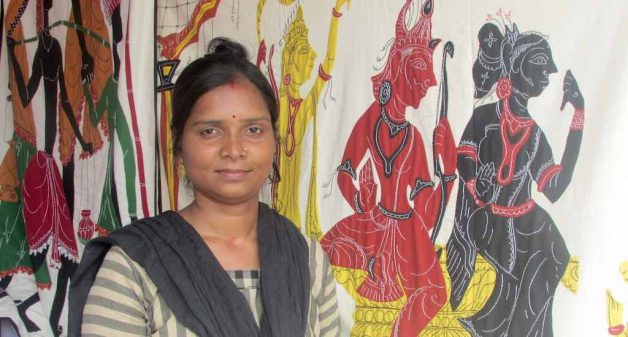 Women artisans like Tina Chhatoi do most of the stitching involved in applique work in Pipli, a hub for traditional and modern applique handicraft (Photo by Rakhi Ghosh)

Colorful chariots are the first thing that people notice during Odisha’s annual chariot procession of gods Jagannath, Balabhadra and Devi Subhadra. Decorating the chariots for the procession has been the responsibility of Darji servitors for generations.

Applique items such as chhati or umbrella, tarasa, a heart-shaped wooden piece covered by applique cloth and supported by a long wooden pole, and chandua, an umbrella shaped canopy are also used in the chariots during the processions.

The craftsmen involved in making and trading of applique works, one of Odisha’s top handicrafts, are settled in Pipli, about 20km from Bhubaneswar, Odisha’s capital. The craft that once began among a small group of people to serve and decorate the gods and chariots during festivals, has evolved into a well-known handicraft and a livelihood for thousands of people.

But due to various reasons, the applique artisans are moving to other trades or migrating to cities to work as construction workers to eke out a living. “If things do not improve soon, there is every possibility that only a handful of craftsmen will be left for doing applique work,” Benudhar Mahapatra, president of Odisha Applique Society, told VillageSquare.in.

Pipli, the village of applique craftsmen, derives its name from Pirs, the Muslim saint who lived in the region. The king of Odisha established the village to accommodate the craftsmen who made applique craft for the annual procession, popularly known as Jagannath Rath Yatra.

Both Hindus and Muslims of the village are involved in the making and trading of applique craft. The craft that originated as a temple art now finds its space in a wide range of decorative and ceremonial products. Almost all the villagers depend on the craft for their livelihood, the tourism industry working in their favor. 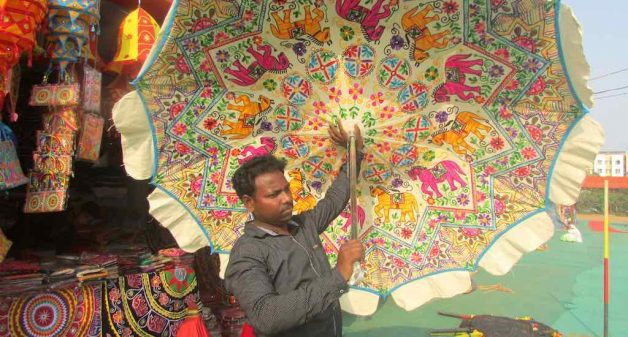 From applique products made traditionally for religious purposes, artisans have adapted to modern needs for better prospects (Photo by Rakhi Ghosh)

“It’s not that all are involved in making or trading of applique products, there are people who run hotels and other businesses that cater to tourists who visit Puri and Konark,” said Mahapatra. “Tourists cannot resist buying colorful applique craft displayed in our shops.”

Applique comes from the French word appliquer, which means ‘put on’. In applique, one piece of fabric is sewn on a base layer. In reverse applique, a piece of fabric is placed on another, and a shape is cut out from the top layer, exposing the lower layer. The two are then stitched together.

The craftsmen of Pipli produce numerous designs from Jagannath and Ganesha, the most favorite gods, to animals, birds, flowers, leaves, and geometric designs. Catering to modern needs, they produce wedding canopies, umbrellas, bags, wall hangings, lampshades and household furnishings that are popular with locals and tourists.

While traditional applique lampshades are still in demand, sale of purses, cushion covers, letter pads, wall hangings and other decorative items has increased. “The modern applique work is finer, creative and has created its own space with customers,” said Tajudin.

Women mostly do the applique work. Almost all the women of every household engage themselves in this craft. It is the source of their livelihood. Women are involved in stitching, but men take care of the designing, cutting and selection of colors, besides the sale of products.

“Whatever applique work you see is done by women artisans, but the pay is very less,” Tina Chhatoi, a woman artisan, told VillageSquare.in. “There is no fixed working hours, sometimes we work for more than 10 hours.”

Though the pay is less, it helps the women add to the family income. “After passing class X, there was no job opportunity; like me, many young women joined applique craft workshops,”Kamini Parida, an applique worker told VillageSquare.in. The monthly income of Rs 5,000 helps her support her family financially.

However, according to a workshop owner, the number of women artisans has reduced. Though the craft is dependent on women artisans, with government’s new skill-building trainings, many young girls quit handicrafts and join apparel factories in Tamil Nadu and Karnataka.

Artisans bought cloth from state-owned Orissa Textiles Mills (OTM) 15 years back. But after closure of the mill they have to depend on private mills or manufacturing units of other states. “After closure of OTM, we buy cloth from Surat and thread and other accessories from Kolkata,” Jabar Khan, owner of one of the oldest applique product shops at Pipli, told VillageSquare.in. 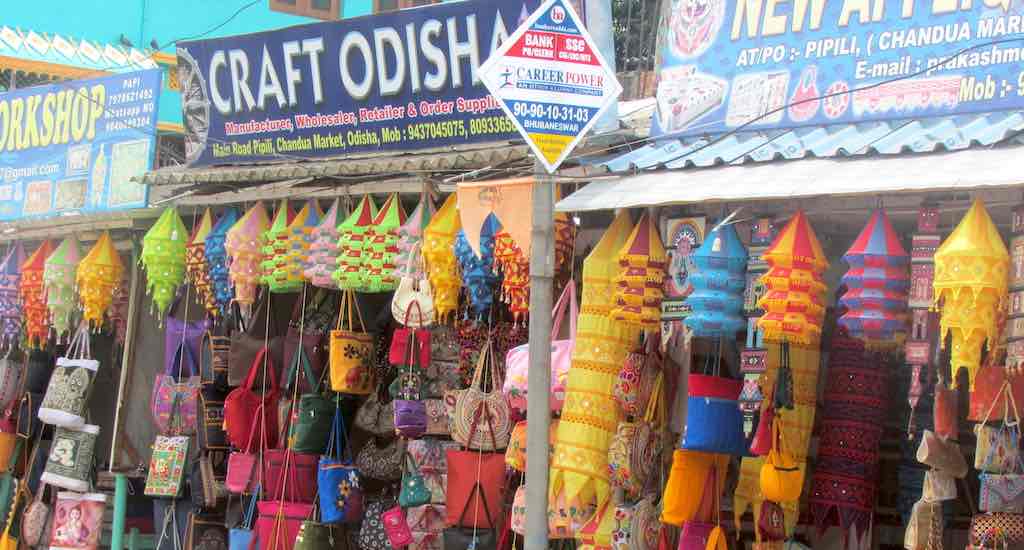 But the real problem, according to the traders is that they do not get the right quality cloth. “For applique work we use low cost material, and so we cannot get good quality cloth, said Jabar Khan. “Because we are buying raw material from Surat the input cost and hence the cost of product increases and customers find it expensive compared to other gift items.”

State Handlooms, Textiles and handicrafts Department has opened a raw material bank for applique artisans and small traders at Pipli. But most of them said that there is not much variety of colors at the raw material bank. “In applique work we use nearly 10 different colors of cloth, threads and other accessories but most of the time the bank stores cloths of only two or three colors,” said Rasanand Maharana, a workshop owner.

The recent Goods & Services Tax (GST) on handicraft items is another challenge for retail shop owners. “In 2016 we sold a large number of lampshades to traders of other states, in 2017 it has dropped to 50% because of implementation of GST,” said Jahid Khan, a trader, told VillageSquare.in. “With 5% GST on cloth and 12% on steel wire you can imagine its impact on price of finished items.”

Tourists from Bhubaneswar used to pass through Pipli, on their way to Puri and Konark. A bypass road, constructed in 2015, for the convenience of tourists and devotees to Puri and Konark during Nabakalebara of Lord Jagannath, has been a major shortcoming for the handicraft trade.

“Now there is hardly any tourist coming to this applique village. Government should make arrangements to bring tourists to this place,” said Jabar Khan. “In other states government does a lot to promote local handicraft, but here authorities are indifferent to our issues,” said Mahapatra.

The villagers briefed central ministers Dharmendra Pradhan and Suresh Prabhu of their plight, when the ministers visited Pipli. They have staged road blocks, put forth written complaints to authorities concerned and also to the chief minister, but are yet to see the results.

The craftsmen plan to introduce applique work in sarees and dress materials, as applique handicraft is always in demand.

“The skill training given by the government should be given for local handicrafts too, otherwise there will be dearth of artisans in handicraft industries,” Maharana told VillageSquare.in.

Recently, an interaction session was held between artisans and traders of applique work and designers of National Institute of Fashion Technology (NIFT), Bhubaneswar. “They were overwhelmed seeing our creativity and we are hopeful this interaction will help boost our business and take applique craft to new heights,” said Mahapatra.