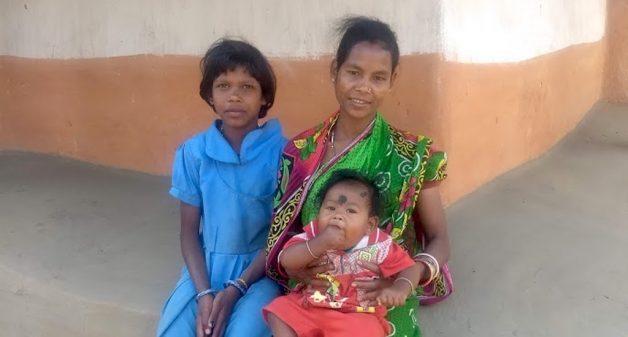 With access to forests restricted and traditional livelihoods unable to sustain them, the Juangs in Khontomara village lag in development (Photo by Jayapadma RV)

The vulnerability of Juangs, classified as a Particularly Vulnerable Tribal Group (PVTG), became a high point in national media with 19 malnutrition deaths of children in Nagada village in Jajpur district in 2016. Absence of road connectivity and health facilities was cited as key factors for this incident.

After the incident, there was a rapid influx of resources and assets into Nagada, which was connected by road and bus service. Brick and mortar houses were built for all families. Intense efforts were made to improve the functioning of Integrated Childe Development Services (ICDS) centers.

Of the 47,095 Juangs in Odisha enumerated in Census 2011, 26,707 (13,071 males and 13,636 females) are in Kendujhar district, mostly concentrated in Banspal, Telkoi and Harichandanpur administrative blocks. Juangs (Juang means man) believe that they emerged from the earth on the hills of Gonasika, where Baitarani River originates, and they are intertwined with nature.

However, with restricted access to forests and changes in traditional practices, they are alienated from their hills, and lag in development.

Earlier, Juang villages had delineated land boundaries for settled and shifting cultivation, and access to forests for fuel and food. They shifted village sites frequently as it was considered inauspicious to live at the same place for long periods.

Shifting of villages, as well as the practice of shifting cultivation have been reduced to a great extent in recent decades due to state intervention in regulating use of forests, leading to change in their lifestyle, and food resources and nutrition.

While many of the Juangs now cultivate their lands in the dry upland, they are unable to grow the traditional crops they grew in slash-and-burn cultivation or gather forest food that sustained them. While the Forest Rights Act of 2006 (FRA) has given them access rights to forest areas, the reconciliation of land deeds by the revenue department is incomplete and ambiguous.

Juangs in Gonasika tend to lead a secluded life, except for their weekly visit to the haat, where they bring their small collections from the forest to barter, or sell to buy their daily needs. Markets reach them often in exploitative ways, to buy forest produce without clear price determinants.

The scatter and semi-isolation of Juangs, and lack of transport facilities make it difficult for development organizations and government functionaries to reach them, and also for the Juangs to reach government and health facilities. 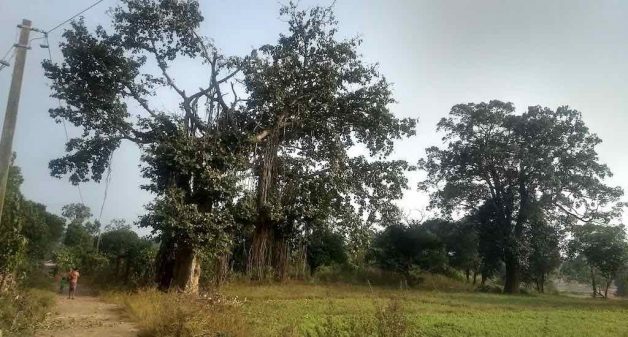 Access to Aadhaar identity numbers, ration and job cards, Forest Rights Act settlement, etc., have seen wide coverage as per government records. The translation of these into benefits, including Antyodaya cards, or jobs under Mahatma Gandhi National Rural Employment Guarantee Act (MGNREGA) and fair wages are still not assured.

The Juang Development Agency (JDA) at Gonasika in Banspal block was set up as a micro-project in 1978 to address the specific needs of the Juangs. JDA has been working in 35 villages in the Harichandanpur-Telkoi reserve forest area, in which Gonasika is located. JDA reaches about a quarter of the Juang population in Odisha, though the Juangs in Kendujhar and adjoining districts are out of its purview.

Low literacy, forest-dependent livelihoods, poor incomes, inadequate nutrition and poor health have been some of the recurrent issues JDA grapples with. According to JDA officials, the villagers go into the forests with their families, and come back late in the evening, and so the children cannot attend school.

Two residential Juang language schools were set up at Gonasika in 2009.The girls’ school has 350 children and the boys’ school has 80 students. JDA has a medical center with a trained health worker and community resource persons identified from the local community. While there are PHCs in the panchayats in JDA areas, doctors and nurses visit them erratically due to poor access.

Access to the villages is much easier today as there is a wide road from Kendujhar to Banspal and Gonasika, through the mining areas. Odisha PVTG Empowerment and Livelihoods Improvement Programme (OPELIP), an IFAD-funded project, was initiated through JDA in 2017.

Through OPELIP, JDA has partnered with a local non-governmental organization (NGO), to reach 54 villages consisting mostly of Juangs, but also other tribes. Communication and trust are key factors for the agency to connect with the community. Of the eight staff at JDA, only one of them, the ‘chainman’ who takes land measurements is a Juang.

JDA does not cover the Juangs in villages in Hunda panchayat. Of the 42 families in Khontomara village, 32 are tribal families, among whom 17 are Juangs. The residents said that the village council meeting held once a year does not serve any purpose as the council chief does not heed their demands, and decides on works to be undertaken and allocation of funds.

Besides cultivating paddy in Kharif (the only cultivation season), the tribes collect firewood and sal leaves from the forests. They stitch the sal leaves and sell 1,000 pieces for Rs 300. Seasonally they gather other non-timber forest produce (NTFP), based on demand from telis or small traders, who dictate the terms. There is no mechanism to ensure that Juangs receive fair price, which again relates to the absence or failure in delegation of responsibilities to functionaries at the local level. 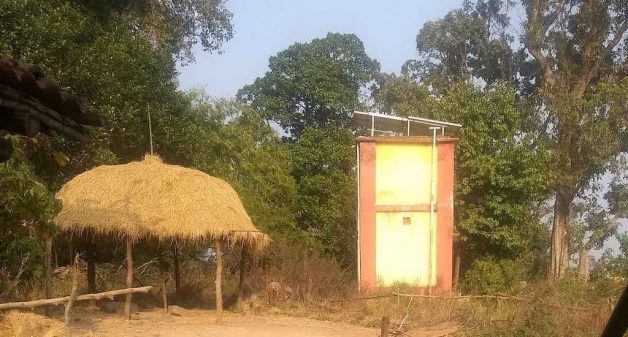 With increased connectivity to the outside world, the Juangs in Khontomara took the initiative to build a water tank to facilitate piped water supply (Photo by Jayapadma RV)

Some years ago the forest department appointed a forest protection committee that guards the forest adjoining the village. This has reduced timber smuggling and poaching, but also restricted access for the Juangs into the forest.

Jhangira, about 6km away, is the socio-economic hub for Khontomara, where there is a PHC, schools and a weekly market. There is no ICDS centre in Khontomara, and children do not leave home till they are 7 or 8 years old and can cross the stream.

The accredited social health activist (ASHA) visits periodically for antenatal and post-natal check-up. All women, including the Juang women, are part of self-help groups. They are exposed to banking, cooking gas connections, and mobile phones, though there is no mobile network in the village yet.

Although electricity has reached the village, not all households are connected, and supply is erratic. In 2015, the villagers came together to set up a piped water supply with the help of a local NGO. As part of the project, all Juang families built toilets and bathrooms (which they use) also.

Increasingly, young men from Juang community are migrating to cities, near and far. Migration, and men and women taking up wage labor in surrounding villages, are often in distress when food runs out. The effort to settle Juangs has taken them away from their traditional way of living, with likely effects on nutrition and health.

The condition of Juangs who live in clustered and largely homogeneous communities, and where they are a majority is different from that of the tribes living as marginal groups in mixed villages. Juangs, living in homogenous clusters have received more targeted interventions from the government, though this has not necessarily resulted in improvements in development indices of health, education and food security.

This could well be because such investments have treated them as passive recipients rather than as participants. With OPELIP it is hoped that the equation changes from ‘delivering development’ to ‘development in partnership’.

It would be incorrect to say that the continuing poor development indicators are a result of government apathy because funds are not a constraint. What seems more the case is the lack of capacities of functionaries at the lower levels in engaging with the Juangs. Physical barriers such as access can be addressed, but communication and building trust need different capabilities and approaches.

Appropriate local institutions such as self-help groups, ward sabha and gram sabha need to be activated and enabled to work towards food and livelihood security. Completing the implementation of FRA provisions in letter and spirit and ensuring fair price for forest produce will reduce distress.

The mobility of young Juang men, migrating to cities for work and attendant access to information through mobile networks, are harbingers of change. This is more evident where Juangs inhabit mixed villages. Skill-building and support services through migrant resource centers will reduce the precarity of migrants, and equip them to demand fair terms of engagement and working conditions.

The younger generation is likely to be less inclined to follow the forest-dependent lifestyle. Through the residential and Juang language schools, it would be vital to establish a connection with traditional livelihood and understanding of the forest and environment.

The changes in literacy levels and livelihood choices could well lead to improvement in development indicators that are more acceptable. How this would impact their relationship with land, forests and cultural traditions will only be known in the years to come.

Jayapadma RV is a senior researcher at VikasAnvesh Foundation. Views are personal.

Jayapadma RV is a senior researcher at VikasAnvesh Foundation. Views are personal.