Village health workers have emerged as the mainstay of the primary healthcare system in rural Maharashtra. Yet, they are paid tiny amounts, get no benefits and struggle with supply shortages 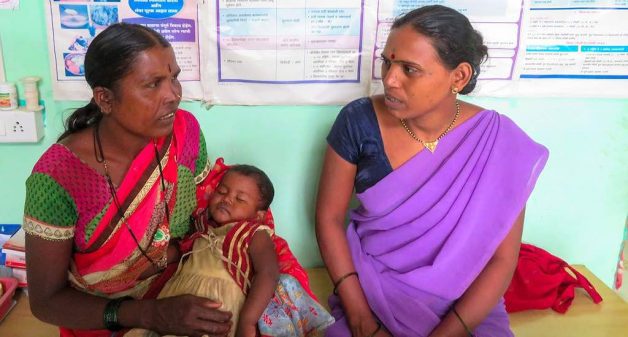 A corner of a small iron cupboard in Uma Patil’s two-room house contains a decade of handwritten records – in large registers, notebooks, diaries, and in photocopies of survey forms. All placed one above the other in thick polythene bags.

It is in these ever-growing stacks that the health of much of rural Maharashtra is recorded by Accredited Social Health Activists (ASHA) – data about child birth, immunization, adolescent nutrition, contraception, tuberculosis and a lot more. Uma has been keeping these voluminous books since 2009 for the people in Arag village in Miraj administrative block of Sangli district in Maharashtra. And repeatedly trying to inform and guide her village about health issues.

In Arag, a large village of around 15,600 people, along with Uma, 15 other ASHAs fan out around 10 a.m. every morning. Arag is also the main primary health center (PHC) for Bedag, Lingnur, Khatav, Shindewadi and Laxmiwadi villages in Miraj taluka – with 41 ASHAs for a population of nearly 47,000.

Each ASHA visits, over time, every household assigned to her, usually spending much more than the mandated five hours a day on this work. “If the houses are within the village, then 10-15 visits can be done in two hours. But some stay at the peripheries or on farms. Then it takes more than five hours for even four visits. And we have to walk kilometers through bushes, farms and muddy pathways. It’s worse during the monsoon,” Patil says.

A home visit involves speaking to families about healthcare, contraception, providing relief for minor ailments such as coughs and fevers, preparing pregnant women for their deliveries and breastfeeding, monitoring newborns (especially low-weight and pre-term babies), tracking children with diarrhea, anemia and malnutrition, ensuring their complete vaccination, trying to prevent or provide treatment for illnesses such as tuberculosis and malaria.

It’s an interminable list of tasks. “We ensure that not a single house is deprived of any [health] survey or health facility. Not even seasonal migrants and their families,” says Patil, who, along with her husband Ashok also cultivates baby corn on their one-acre farm.

Additionally, in those always piling-up notebooks, the health workers have to maintain data about all their visits, monitoring and surveys. “I earn Rs. 2,000 a month and spend around Rs. 800 on notebooks, xerox, travel and mobile recharge,” Patil says. “We have to take the two photocopies of each original form. One we submit to the facilitator and the other remains with us. It costs Rs 2 (to photocopy) each side.”

These forms are myriad – the Home-Based Newborn Care form, the Janani Suraksha Yojana’s form for pregnant women, family surveys on toilets and sources of drinking water, data on leprosy – it goes on. And then there is the Village Health and Nutrition Day survey, which notes how many attended this monthly event, levels of hemoglobin checked, immunized children, malnutrition – it contains an exhausting total of 40 such details. 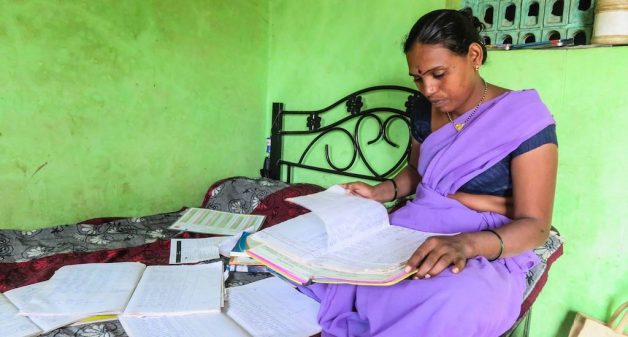 Paperwork is part of an ASHA worker’s tasks, and they often bear the costs of stationery and photocopying (Photo by PARI)

The copious data collected by Patil and other ASHAs is uploaded on the state government’s NRHM site at the end of every month. Priyanka Pujari, 28, a facilitator at the Arag PHC, is struggling to update this site when I visit. The health center has three single-floor buildings that house a lone computer, a doctor’s cabin and sitting space for visitors, a laboratory for blood tests and a store room for medicines. Usually, one facilitator monitors the work of 10 ASHAs and works at the PHC from 10 am to 6 pm. The PHC also has (at least on paper) a nurse, a visiting doctor and medical technicians.

“The ASHA site was down since April. It restarted in November. I am updating the data of the current month along with pending months. Often, due to load-shedding [power cuts] and poor internet connection, work stops,” says Pujari. She has been working as a facilitator for three years, after doing a BA and a Diploma in Education. She comes to the PHC from her village, Lingnur, around 7 km away, by a scooter or a state transport bus. Her role includes supervising the work of ASHAs, holding monthly meetings and attending to people coming to the PHC.

Pujari earns Rs 8,375 a month – but only if she completes a minimum of 20 home visits for newborn and antenatal check-ups, and spends five days updating the ASHA site. “If we fail to complete 25 days in a month our payment gets deducted. Both ASHA and facilitator must present this work to Block Community Mobilizers  (health officials higher up the hierarchy) in order to get paid.”

During the monthly meetings at the PHC, Pujari also voices the collective concerns of all the health workers. “But nothing happens,” she says. “Recently, we got (only) this stationary kit with five notebooks of 50 pages, 10 pens, a pencil box, a 5 ml glue bottle and a ruler. How long will these last?”

A shortage of medical supplies is another recurring problem. “It’s been three months since we received boxes of condoms and contraceptive pills. If someone comes to us in the night for medicines for fever, headache, backache, we don’t have them,” says Chhaya Chavan, 42, who averages Rs 2,000 a month as an honorarium. Her husband Ramdas earns Rs 7,000 working as a guard in a nearby sugar factory.

And still, it is on these field workers that rural India’s primary healthcare rests, it is they who contribute significantly to improving the country’s health indicators. For example, the National Family Health Survey-4 notes that Maharashtra’s infant mortality rate in 2015-16 declined to 24 deaths per 1,000 live births from 38 in 2005-06, and institutional deliveries increased to 90.3 per cent in 2015-16 from 64.6 per cent in 2005-06.

“ASHA acts as a bridge between the community and the public health system. Her role is vital to improving maternal and newborn health. Her constant home visits and regular communication about illness with the people act as precautionary measures,” says Niranjan Chavan, gynecologist-obstetrician at the public Lokmanya Tilak Municipal General Hospital in Mumbai.

And it is often the ASHA workers who are the first line of defense in any health-related situation. “Six months ago, in Laxmiwadi (3 km away), one person was detected with swine flu. The ASHA of that village immediately informed the Arag PHC,” Patil recalls. “A team of doctors and supervisors went there and surveyed all 318 households in a day. We took the blood samples of anyone who had symptoms. There was no other case.”

The villagers though recognize the difference ASHA workers have made.  “I had never seen a hospital until two years ago when I had a cataract operation,” says an elderly Shirmabai Kore. “Uma guided us. She also looked after my daughter-in-law Shantabai for two years (in 2011-12) when she had tuberculosis. These young women (ASHAs) are ensuring the health of old people like me, youngsters and children. There was no such thing in my time,” says Kore. 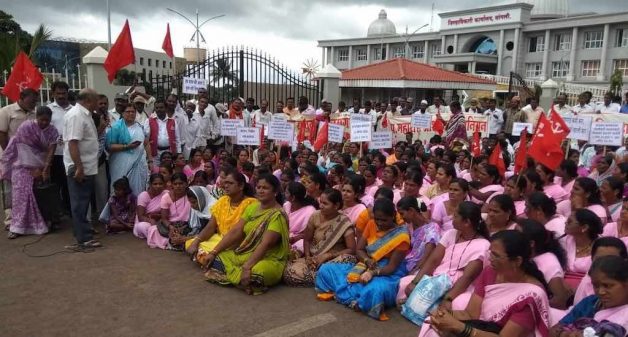 Chandrakant Naik, a 40-year-old farmer in Arag, speaks of a similar experience. “Three years ago, when my four-year-old niece had a severe stomach ache and was vomiting, we didn’t know what to do. I ran to Uma’s house for help. She called an ambulance. We then took her to the PHC.”

ASHA workers are used to handling such emergencies, usually spending their own money for immediate expenses. Chandrakala Gangurde, a 32-year-old ASHA in Talwade Trimbak village in Trimbakeshwar talukaof Nashik district, recalls an incident in 2015: “It was 8 pm when Yashodha Saure went into labour. We waited for an ambulance for nearly 45 minutes. Then I hired a private vehicle from a neighbouring bungalow owner. We took her to the civil hospital in Nashik (around 26 km away). I was there the whole night. She delivered a girl, who is now three years old.”

Saure, 25, adds, “I am very thankful to Chandrakalatai. The hospital and doctor were out of our reach. But tai helped.” For ensuring this institutional delivery, Gangurde received Rs 300 as honorarium under the central government’s  Janani Suraksha Yojana (that aims to reduce maternal and infant mortality). She paid Rs 250 to the owner of the vehicle and spent Rs 50 on tea and biscuits.

Gangurde is among 10 ASHAs under the Amboli  PHC, where she goes for meetings twice a month, along with other health workers from the villages of Trimbakeshwar taluka. “They all speak of similar experiences. The ASHA worker herself is from a poor family. She herself struggles financially but works hard to keep the village healthy,” Gangurde says.

She, like other ASHA workers, wants an increase in the amounts paid to them. “It’s not a huge demand. The honorarium should be doubled, traveling and other expenses should be paid. After giving all our life for the health of others, we can demand at least this much,” Gangurde says, her voice breaking.

There have been several agitations by ASHA unions and organizations, demanding that the government must hike their payments and address their other concerns. In September 2018, Prime Minister Narendra Modi announced an increase in the payment – or incentives – for some recurring activities; for example, Rs 300 instead of Rs 100  for maintaining the village health register.

But health activists and ASHAs have criticized this proposal. “Time and again, we have demanded a fixed (minimum) monthly salary of Rs 18,000.  Along with insurance cover, pension, and making ASHAs permanent workers (with benefits). Increasing the routine incentive is not going to solve the problem,” says Sangli-based Shankar Pujari, president of a Maharashtra ASHA workers and health employee’s organization.

Meanwhile, in the Arag village PHC, Uma Patil and others were speaking of a protest the ASHA workers are planning in Mumbai in January.  “One more agitation,” Patil sighs. “What to do? ASHAs (the word asha means hope) survive only on hope.”

Jyoti Shinoli is a Mumbai-based journalist. Views are personal.

The article was first published in People’s Archive of Rural India.

Jyoti Shinoli is a Mumbai-based journalist.