Extreme weather events such as untimely snowfall and heavy floods have harmed the apple crop in Kashmir; one way to reduce losses is to properly implement a crop insurance scheme 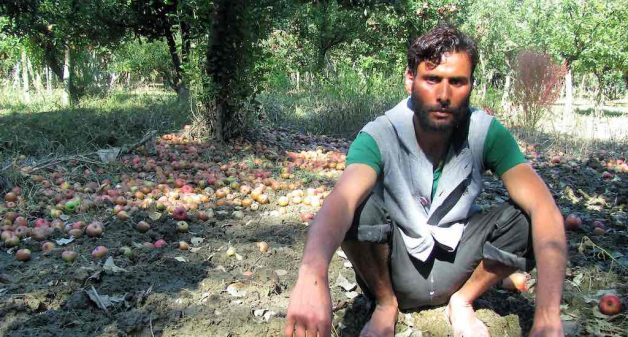 Apple growers suffering financial losses due to untimely snowfall in 2018, had suffered damages during the 2014 flooding as well (Photo by Athar Parvaiz)

If anything exemplifies the vulnerability of Kashmiri apple growers to the vagaries of weather, it is a video of a Kashmiri farmer who was filmed while he wailed over the damage caused to his apple crop by an untimely snowfall in early November last year.

Complaining to god about the untimely snowfall, as apple farmers were yet to harvest some varieties of apple, the farmer can be heard moaning: “You have wreaked havoc with my apple crop. What have you done to me, oh god?”

Kashmir saw an untimely heavy snowfall on November 3, which caused huge damage to apple growers, with some estimates putting the losses suffered by Kashmiri apple farmers at over Rs 5 billion.

Apple growers were the hardest hit as the snowfall didn’t only damage the apple crop, but also the branches of apple trees laden with fruit, making them crumble under the weight of snow. The sudden snowfall also disrupted the transportation of Kashmiri apple to outside the state as the national highway remained blocked for several days due to extreme weather.

This is not the first time Kashmiri apple farmers had to suffer economic losses because of an extreme weather event.  Farmers in Kashmir, especially apple farmers, have been suffering because of vagaries of weather such as unexpected snowfall, heavy rainfall, hailstorms or lack of rainfall; and the economic losses to farmers get repeated almost on a yearly basis. The worst damage in recent years was caused by the 2014 floods.

“When I visited my orchard after the snowfall in (early) November, I could not control my emotions as I saw my entire apple crop under the snow,” said Ghulam Ahmad, an apple grower of Shopian. Ahmad said that many of his apple trees were damaged by the snowfall. “We take care of our apple trees almost like our children. It takes us several years to nurture an apple to tree until it starts producing the crop. But, the untimely snowfall consumed a dozen of my apple trees,” Ahmad said. “Despite the damage to my apple crop and losing my apple trees, I can’t do anything but suffer silently.”

Mohammad Shafi Lone, an apple farmer of Sopore, told VillageSquare.in that it would be hard for him to pay the school fee of his three children this year owing to the losses he suffered because of the early snowfall. “Though I had harvested and sold over 60 percent of my yield, the damage to the remaining produce would hurt me economically throughout 2019,” Lone said. “We farmers depend entirely on our apple crop. Any damage to our crop causes problems for us.” 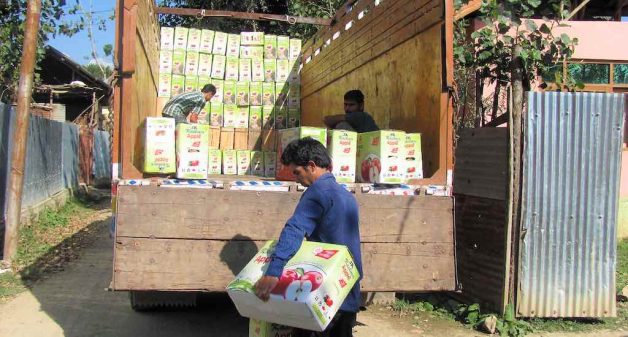 According to a vulnerability assessment study carried out by government of India’s Department of Science and Technology (DST), in 12 states in Indian Himalayan Region (IHR), Jammu & Kashmir is one of the first three most vulnerable states to climate change impacts in India, the other two being Assam and Mizoram.

“Our study reveals that Jammu and Kashmir has the third highest vulnerability ranking among the Indian Himalayan States, mainly because it has no area under crop insurance, its most geographical area is under sensitive slope, it has least road density, low percentage of area under horticulture crops, relatively low participation in Mahatma Gandhi National Rural Employment Guarantee Scheme, low livestock to human ratio and low percentage of women in the overall workforce, among other factors,” Majid Farooq, an environmental scientist working with the provincial government, who participated in the study, told VillageSquare.in.

Scientists working on impacts of climate change across the Kashmir Himalayas say that the impacts of changing climate are already visible on ground as erratic weather patterns are repeating often now as compared to the past.  “For example, the snowfall now occurs either at the most unexpected times (such as in February, March or November) or doesn’t occur at all like we saw in some years in the recent past,” said Shakil Ahmad Romshoo, head of the Earth Sciences Department at the University of Kashmir.

According to Romshoo, the government should help farmers adapt to the changing climate through its state action plan on climate change and should also provide insurance cover to farmers against climate-related risks.

However, farmers say the government has so far failed to bring farmers of Kashmir region under any insurance cover. The apple growers and saffron growers are particularly clamoring for insurance cover, considering the vulnerability of apple crop and apple trees to extreme weather events.

Bashir Ahmad Bashir, president of Apple Growers’ Association in Kashmir, said that despite untimely snowfall wreaking havoc with apple crop several times in recent years and frequent droughts and erratic rainfall causing damage to apple crop, the government has failed to implement the restructured Weather Based Crop Insurance Scheme (WBCIS). “The government could not do it despite the fact that the state cabinet of the previous government had approved it,” Bashir told VillageSquare.in. “We are being treated unfairly. This is the only way I can describe the treatment we are getting.”

However, Jammu & Kashmir’s secretary of Horticulture Department, Manzoor Ahmad Lone, said that the government is in the process of implementing WBCIS. “We had tried very hard to get the insurance companies for insuring horticultural crops such as apple. But they were adamant that they will insure the crops on the basis of weather rather than yield. Also, there were issues regarding the premium due to which the insurance scheme couldn’t take off so far despite our efforts since 2016,” Lone told VillageSquare.in.

“But now, we are sure that the insurance scheme will get implemented from the upcoming financial year,” he said. “We are proud about the fact that more than 70% apple production in India comes from J&K.”