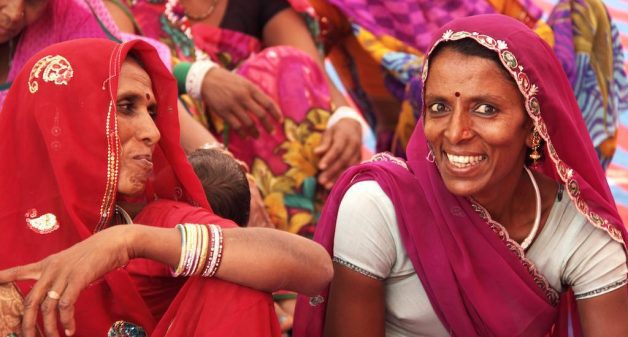 Women from the remotest villages of southern Rajasthan provide a perfect example of what happens when the most marginalized are denied their rights repeatedly. They are only left with a sense of assertion and their knowledge to demand their entitlements. Display of anger is not common among the tribal women of this region, but a century-old subjugation of the Adivasis has created a simmering sense of fury.

In fact, the category of actors responsible for historically exploiting the Adivasis has broadened. Petty government employees who have been made responsible for delivering people’s basic entitlements have now joined the cadre of exploitative landlords and moneylenders who assume positions of power in villages.

This is an account of rural Adivasi women changing the face of citizens’ action by devising new ways to fight the ever-oppressive local administration.

Last month, 10 women from Deepala and Kalaswa panchayats of Kherwara administrative block decided to collectively address the issue of ration that the women in their panchayats had been facing for two months. The dealer refused to give the women their designated food grains under the Public Distribution System (PDS) on the pretext that there were no rations.

When the issue was discussed in the Ujala Samooh meeting (a local women’s solidarity group in the village), 10 women from the group, including the group’s leaders, went to the ration dealer in Deepala. They demanded their entitled ration for the current month as well as the previous month.

The dealer, who had never witnessed such an act of defiance by women, especially those belonging to the tribal community, was shocked. He denied there being any government provision for receiving two months’ ration together. Under the National Food Security Act, beneficiaries of the PDS can collect their ration for two months if they had missed the previous month’s ration due to unavoidable reasons.

The women, having anticipated such a backlash from the dealer, refused to leave the shop without taking their full ration. “You can either lock us all inside the shop and leave or we will lock you inside and wait till you agree to disperse the food grains, because we will not leave without our ration today,” they told him. The dealer had to comply and give them their due ration.

In another incident of challenging the otherwise indisputable power of the village administration, women from Saklal panchayat in Kherwara displayed great valor. After repeated denial of work under Mahatma Gandhi National Rural Employment Scheme (MGNREGS) from the panchayat samiti without any valid reason, women workers from the area decided to take up the matter with the panchayat officials. 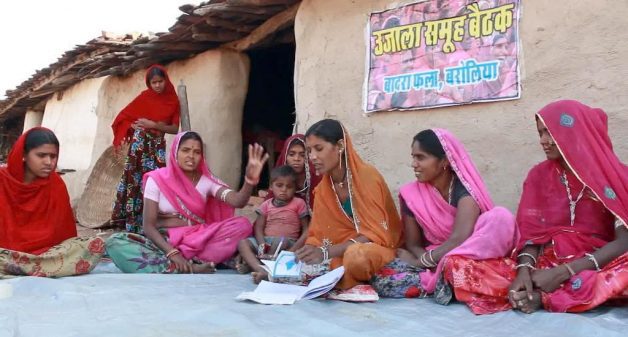 An Ujala Samooh leader examining a member’s ration card during a meeting in Salumbar, Udaipur (Photo by Manish Shukla)

When the officials at the panchayat refused to hear them out, the determined women approached the panchayat official responsible for allocating work under MGNREGS.

“We have been asking for work for two months, but no one at the panchayat is willing to listen to us,” said Kamla, the community volunteer for the women’s solidarity group in Saklal panchayat. “ ‘Now, either sanction us work or we will work in your house’ we told the official.”

“It was difficult to think of any consequences at that time. We started to clean the panchayat official’s house, and he just stood there, ashamed,” said Kamla. The official had to comply and provide them work under MGNREGS.

The women solidarity groups were formed around four years ago in the panchayats in and around Kherwara. The platform gives women an opportunity to meet and discuss their lives, devising responses to everyday challenges. Gradually, they recognized the need to collectively demand public entitlements in their villages.

In the absence of any male members in local families – over 80% from southern Rajasthan having migrated to Gujarat or Maharashtra for work – officials in the area handling programs from MGNREGS to PDS, have been acting as demi gods. Assuming that women do not have any knowledge about their rights or even the courage to speak to the village officials (mostly men), they never regarded women as equal citizens who could demand their rights.

It is only recently that the women’s solidarity groups have begun to develop a comprehensive understanding of their public entitlements and the right channels to access them. And they are constantly being tested – from having to make continuous demands of the administration, to developing effective ways to monitor its functions.

In Aajeevika’s experience of working with the rural Adivasi women through solidarity groups for the last nine years, we saw the women progress from being defenseless, to using their agency and rights to overcome challenges. It is through these disruptive methods that the women can be called political beings who are engaging with their surroundings. They are making demands for the rights granted by the state.

Overall, the women show greater comfort and confidence now, in dealing with the men in the community. As related by them, this is in stark contrast to the earlier days, when they were hesitant to talk to men, even their husband. Now, however, with an elevated sense of their own citizenship, these women refuse to feel small and inconsequential before others. They have been able to convert their previous sense of fear and insecurity into a collective force.

The fact that the women make claims on the government’s schemes gives them the identity of empowered citizens. It is through this ability of claim-making that the women are able to imagine an alternate reality for themselves where they have the right to work and the basic amount of food grains, to lead a healthy life.

Together they are able to visualize a reality where they lead healthy and happy lives. The solidarity groups have been instrumental in bringing women out of their sense of helplessness and insecurity to realize the power within.