Young girls in rural Murshidabad are pushed by their parents to roll beedis, the poor man’s cigarette, at the cost of their schooling because being able to earn improves their marriage prospects 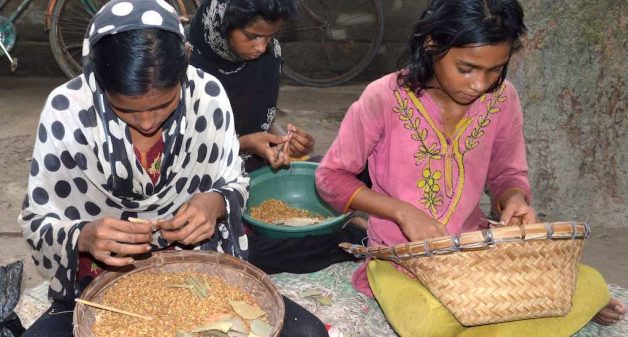 Villagers in Murshidabad prefer girls as they can start rolling beedis at a very young age, adding to the family income (Photo by Gurvinder Singh)

Ayesha Khatun is busy rolling beedis (coarse tobacco rolled in tendu leaves) at Muskinagar village in Murshidabad district of West Bengal, around 350km from Kolkata. She places tobacco flakes in a tendu leaf and cuts it into a small rectangular piece. Her tender fingers roll it down and tie it with a thread. She then tucks one end with a small iron rod and the poor man’s cigarette is ready.

While rolling the beedi, she keeps an eye on her watch and tries to move her fingers quicker. She now manages to roll 200 beedis a day, but aims to increase it to 300 in the next two months through constant practice.

The 14-year-old, a Class X student, often misses school, but is not bothered about her education. She knows that her demand in the matrimonial market depends on the speed and accuracy with which she can roll beedis, and education virtually has no place in her future plans.

Ayesha’s story is similar to thousands of girls in Murshidabad district who work as child laborers to brighten up their chances of getting a suitable groom and also to offer financial support to their families from a very tender age.

Situated on the left bank of Ganga River, the district was once known for its gold and silver embroidery and silk weaving. But times have changed, and the traditional arts have slowly made way to modern industries.

Murshidabad, with a population of over seven million (Census 2011), is now a popular hub of the beedi industry in the country. About 90% of the work force constitutes women and children.

Beedi rolling is a virtual household trade here, with women and children being involved in the work in every nook and corner of the district. But it has failed to light up their lives. On an average, a beedi worker gets Rs 150 for rolling 1,000 beedis, in the process inviting serious ailments because of continuous exposure to tobacco. 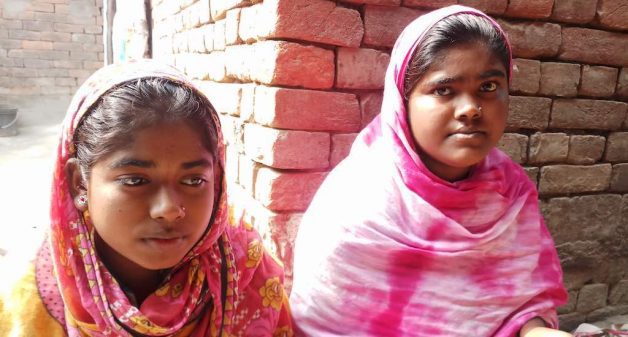 Young girls’ beedi rolling skills play an important role in marriage proposals, and the practice of child marriages is rife in the district (Photo by Gurvinder Singh)

In 2006, the Ministry of Panchayati Raj named Murshidabad as one of the country’s 250 most backward districts (out of a total of 640). In this context, it hardly comes as a surprise that Murshidabad has topped the chart with highest child marriages in the country.

The National Family Health Survey-4 (NFHS-4), conducted in 2015-16 and whose findings were published recently, found Murshidabad ruling the chart of child marriages with 39.9% cases. The national average for child marriages presently stands at 11.9%.

Despite having topped the chart for child marriages, Murshidabad district enjoys the highest child sex ratio in the state. According to Census 2011, West Bengal had 956 girls (0-6 years) for every 1,000 male children born, while in Murshidabad the child sex ratio was 968. But the high child sex ratio is linked more to the financial aspects rather than to any awareness campaign.

“Unlike other parts of the country, daughters are welcome as they translate as earning members of the family. The girls start rolling beedi even at the age of six or seven,” Sahina Parveen, a beedi worker in Muskinagar village, told VillageSquare.in. “People are more concerned in making their daughter skilled beedi workers, than in getting them educated.”

Parveen said that when marriages are arranged, the prospective bride is asked about her speed of rolling beedis, in terms of number of beedis she roles in a day, rather than her academic qualification. It is one of the aspects in the final decision of an alliance.

Anjuma Bibi (45), a beedi worker in Sibtolla off Farakka block, said that a woman is expected to be an adept beedi roller and also run the household. “Most of the men are either alcoholics who squander their daily earnings on gambling, or migrate to other states to work as laborers,” she told VillageSquare.in. 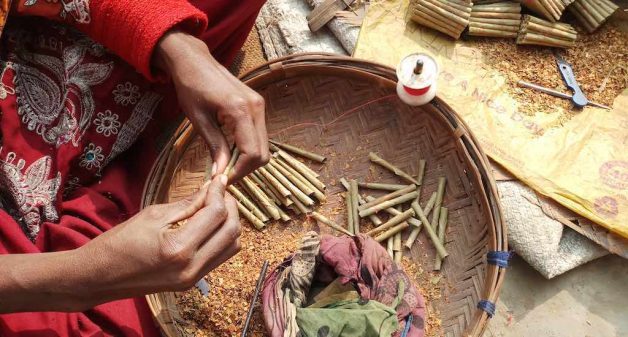 Most of them are Muslims and are generally not allowed to step outside their houses. Beedi rolling remains the only way to eke out a livelihood. The women must be quick in rolling beedis because of the paltry returns of Rs 150 for 1,000 beedis. It is nearly impossible to roll so many in a day unless the worker is extremely skillful.

But the hard-earned money comes with serious health implications, as constant exposure to tobacco raises the risk of respiratory diseases. Several hours of sitting and working at a stretch causes back pain and a strain in the eyes.

Health facilities are scarce in the district. The only hospital established for beedi workers at Dhulian in Murshidabad is far from their villages where they reside. Many workers say they cannot afford to take time off work to travel to the hospital as it would lead to loss in working hours and hence earnings.

To make matters worse, most of the departments of the 60-bedded hospital are shut due to shortage of medical equipment and staff.

“We get around six tuberculosis patients every month but refer them to other hospitals because of lack of facilities here,” Manoj Biswas, a hospital clerk, told VillageSquare.in. There has been no surgeon since the hospital began operations in 2000 and no lab technician since 2015.

Moved by their plight, Salma Khatun, a homemaker at Mahespur, has started Murshidabad Mahila Udyog, a non-profit organization, to provide alternative livelihood for women beedi workers. “I realized that it was impossible to bring them out of the trade unless we provided them with a better livelihood opportunity,” Salma Khatun told VillageSquare.in.

She has been providing training to women in tailoring and computers to help them choose a livelihood. “We have already trained around 120 women in the past one year,” said Salma Khatun. But more than individual initiatives, beedi workers say that a concrete action from the government is required to lift them from the harsh work and shift them to an alternative livelihood.