The travails of India’s forest dwellers 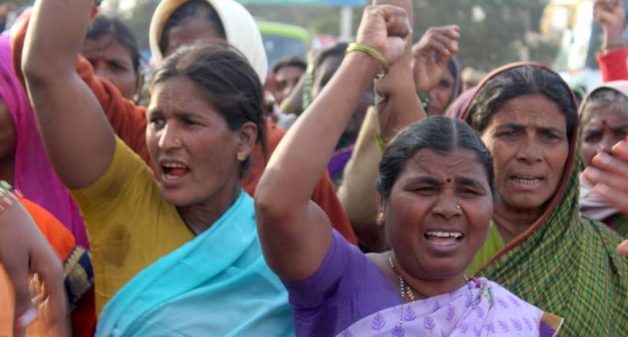 Women, such as Mokshamma of Madya Nisedha Andolana, have been demanding prohibition since 2016 (Photo by Madya Nishedha Andolana)

Mokshamma of Maski village in Raichur district’s Lingasugur taluk spoke with palpable anger. “We don’t need any social security benefits from the government. We shall educate our children and take charge of our life, just ban alcohol,” she said, speaking on behalf of many woman-headed families that have lost their loved ones to alcohol.

The 43-year-old is a member of the state committee of Madya Nishedha Andolana, a movement that is demanding prohibition in Karnataka since 2016. Mokshamma was at the forefront of the recent padyatra (foot march) of nearly 3,000 women, covering more than 200km.

This is not their first appeal for a ban on the production, sale and consumption of alcohol in the state. Though two years of widespread campaigns, candlelit marches and protests have not yielded any result, the women persist, knowing that it would be a long haul.

Although no one in Mokshamma’s family consumes alcohol, she knows many women pushed to penury because of the husband’s alcoholism. “Domestic violence is so bad that some women are scared of nightfall,” she said. In extreme cases, alcoholism leads to widowhood and single parenthood, feeding the vicious cycle of debt and poverty.

Magnitude of Substance Abuse in India, a recent report, estimates the number of alcohol users aged 10 to 75 as 160 million. Of this, 19% suffer from alcohol dependency and need intervention. 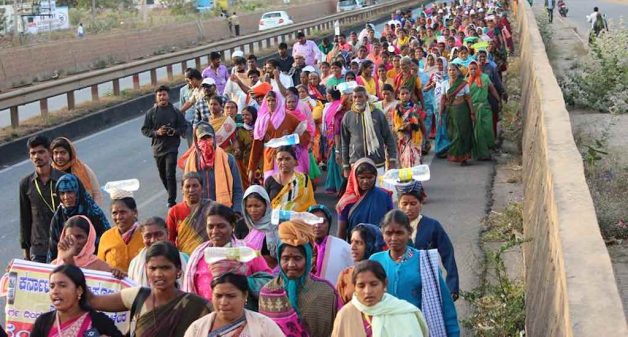 Women from across Karnataka marched from Chitradurga to Bengaluru in January 2019, intensifying their demand for a liquor ban (Photo by Madya Nishedha Andolana)

Empirical evidence shows an increase in number of road accidents, incidents of rape and domestic violence due to alcoholism. Epidemiological studies state that “alcohol imposes a significant economic burden in families with alcohol-using members.”

“Alcoholic men do not just stop at selling their land and jewelry, and pulling children out of school. They don’t even spare a packet of cooking oil to feed their addiction,” said Mokshamma.

The anti-liquor movement took root in Raichur, an arid district, when collectives and non-governmental organizations came together to form Madya Nishedha Andolana (MNA). On 2 October 2016, women across Raichur, brought together by MNA, campaigned for Mahatma Gandhi’s vision of an alcohol-free India.

On 30 January 2017, the women held a jail baro (fill prisons) protest in 18 districts. “We protested in front of excise offices demanding they stop issuing licenses to alcohol outlets,” Mokshamma, who was arrested and later released, told VillageSquare.in.

On 25 October 2017, 30,000 people from all the districts gathered in Raichur for a state-level protest. In the presence of social activist Medha Patkar, they broke liquor bottles and submitted memorandums to various political parties to include prohibition in their electoral manifestos.

MNA organized a 71-day long protest, from 20 February (World Justice Day) to 1 May (Labor Day) in 2018. “We organized it in such a way that every day 50 women from each taluk in Raichur district could participate and there were 200 women at any given day,” said 36-year-old Virupamma from Sindhanur.

The padyatra in January 2019 was their latest effort to intensify their demand. The 12-day protest saw over 3,000 women from across Karnataka chanting slogans such as “Beer beda neer beku” (We don’t want beer, we want water), “Saraayi beda shikshana beku” (We don’t want liquor, we want education), as they marched from Chitradurga to Bengaluru. 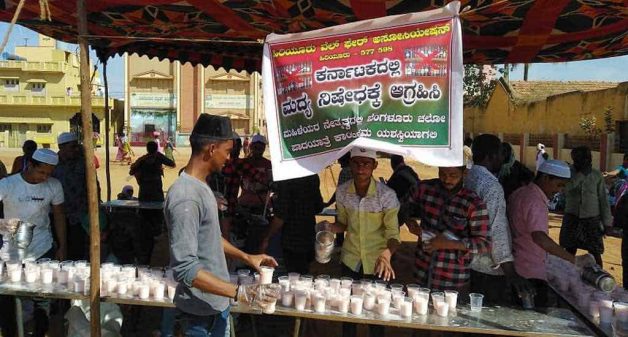 Throughout the 200km long march, the women protestors received support from many who expressed their solidarity in many ways (Photo by Madya Nishedha Andolana)

Most of the protestors were daily wage labor and farmers, and had to forego a week’s income to participate in the march. “That’s a lot of sacrifice for female-headed households,” said Mokshamma.

The morale of the protestors suffered when Renukamma, a 60-year-old laborer from Lingasugur, succumbed to injuries after a motorbike hit her. “No one in Renukamma’s family drank alcohol. Yet she lost her life while showing her solidarity,” said Mokshamma.

During the march, the protestors survived mostly on two meals a day, camping at community halls, schools and temples. Unmindful of the scorching heat and blistered feet, they stopped frequently to create awareness about the ill effects of alcohol.

“When we explained the cause, women were quick to serve us water, tea and meals. In many places, strangers supported our movement by buying us saris, slippers, sanitary napkins, etc.” said Mokshamma. “Since almost every household has suffered because of alcoholism, it was easy to mobilize the women,” Swarna Bhat, activist, said of the march.

Chief Minister H. D. Kumarawamy did not meet the protestors but sent representatives to get their demands. “He refused to consider our demands. Among other explanations, he cited pending sugarcane arrears and farm loan waivers as the reasons for not imposing prohibition,” Swarna Bhat, member of the small team that met the Chief Minister, told VillageSquare.in. 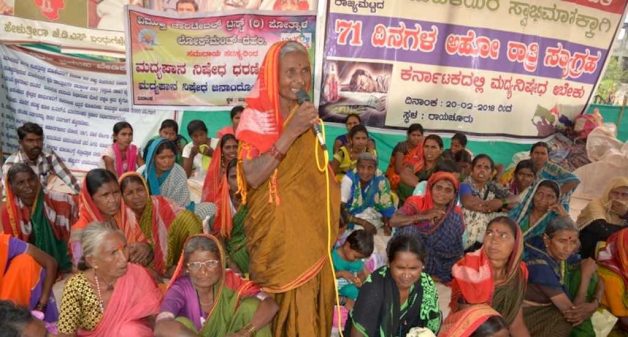 In Karnataka, excise revenue has grown by 273% in the past 11 years. Bhat questions the creative capabilities of a government that cannot think of any revenue sources, besides alcohol. “We don’t want governments that make money by intoxicating people. They should be ashamed of wrecking families,” said Mokshamma.

Time and again, many leaders including former Chief Minister Siddaramaiah, have been unwilling to ban alcohol. “They list redundancies for not banning, instead of considering a cost-benefit analysis,” Prasanna, theatre personality and activist, told VillageSquare.in.

Alcohol is also illegally sold in grocery stores in many villages. The rise in sale of spurious liquor is often a counter argument. “Prohibition or not, people die of consuming illegal liquor everywhere,” said Bhat, citing the recent hooch deaths in Assam.

Virupamma said that politicians own many liquor shops. Citing political parties distributing alcohol during elections, she said, “How can we expect them to debate prohibition in the assembly?”

“Ironically, governments that claim to benefit from huge revenues through alcohol end up spending more on healthcare. They mull over providing loan waivers to suffering families of farmers’ when one of the reasons related to farmer deaths and suicides is alcohol,” said Bhat, questioning the true intention of governments in tackling alcohol abuse.

Article 47 of the Indian Constitution states, ‘the state shall endeavor to bring about prohibition of the consumption, except for medicinal purposes, of intoxicating drinks and of drugs which are injurious to health.’

However, the ruling does not enjoy enforcement as it is placed under the Directive Principle of State Policy, leaving the discretion on prohibition to the state government. Currently prohibition is in place in Bihar, Gujarat, Nagaland and Lakshadweep.

“We hear women in Bihar live peacefully and accident rates have come down. So, if they can do it, why not Karnataka?” said Mokshamma.

MNA recommends eliminating liquor sale targets for excise departments and curtailing the number of licenses; and plans to collate research that backs their cause. MNA hopes to use laws under the Rural Development and Panchayat Raj Act (73rd amendment) to question issuing of liquor licenses against the will of gram sabhas.

“Our politicians may not recognize women as vote banks, but we will teach them a lesson by not voting in the upcoming elections, if need be,” said Bhat. “We are ready to march to Delhi if our demands are not considered,” said Mokshamma.

“The padyatra might have ended on a no-assurance note, but that has not hampered our fighting spirit,” said Virupamma. “Our tears have dried up but our determination has doubled.”