Teenaged Santhal girls in West Bengal have taken to football despite facing community antagonism. They hope that the sport would deliver them from poor socioeconomic shackles 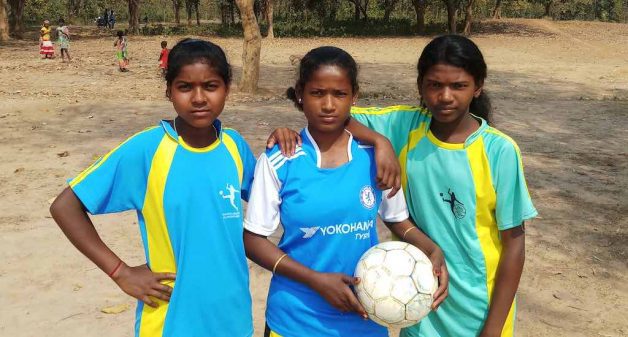 Malati Hansda finds it difficult to believe that she was punished for dreaming big. Her eyes fill with tears, remembering the day when a group of villagers assaulted her mercilessly by raining blows and pulling her by her hair in November 2018.

Her only fault was that she, along with a few other girls of the village, had been dabbling in football, hoping to change their destiny and live with dignity. But the villagers didn’t take it sportively. They thought that teenagers wearing shorts above the knees were a grave insult to their customs. They decided to instill fear among the girls and to dissuade others from taking the same path.

The brutal attack on the girls caused physical wounds but it failed to dampen their enthusiasm that has doubled since then. The girls work tirelessly with a firm and resolute mind to prove that socioeconomic background and oppression cannot stop those who are determined to achieve their goals.

The story of Hansda and the other girls looks impressive when viewed from the prism that they hail from the extremely backward tribal Santhal community in Birbhum district of West Bengal. The Santhals are yet to taste development and are viewed by the political class as nothing more than a guaranteed vote bank.

Hansda (16), is the youngest of five siblings. She lost her father a few years ago and her mother does odd jobs to keep the home fire burning. “She barely earns Rs 300 every week, which isn’t enough. We somehow manage to survive,” Hansda told VillageSquare.in. “There have been days when we had to sleep on empty stomachs.”

The hardship has made her more determined to achieve her aim of becoming an ace footballer. “I want to bring laurels to my country and my family. I want to prove that Santhal girls are in no way inferior to others,” said Hansda, a Class X student. “Days are gone when we were considered a slave to our husband, destined to stay within the house and look after children.”

Hansda’s friend and footballer Bitti Mardi also hails from a financially weak background. Her father is a farmer with a small patch of land. Water shortage and poor returns from farming has been causing financial strains for the family. 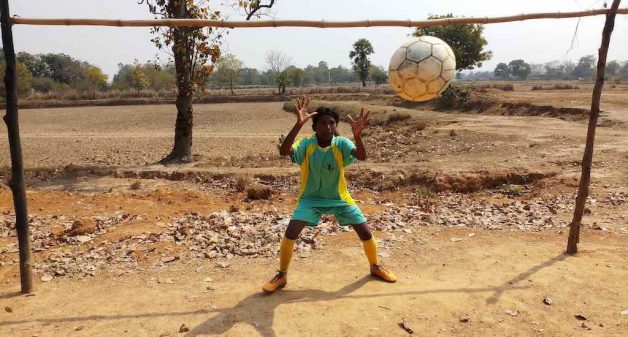 Assault and opposition from some villagers have made the girls practice on uneven grounds, with makeshift goalposts (Photo by Gurvinder Singh)

Teenaged Mardi refuses to dwell on her present hardship and strongly believes that she can change her life with football. “I want to change my future; excessive dwelling on the present will crush my dreams,” Mardi told VillageSquare.in, with a sense of confidence clearly audible in her tone. “I will not listen to anybody who tries to stop me.”

Hansda and Mardi are part of a group of 15 girls, between ages 11 and 17. They hail from the Santhal community, and have defied odds to achieve their dreams. The girls live in Garia and Bhalka Pahari villages in Rampurhat block of Birbhum district.

The Santhals are an ethnic group, native to the states of Jharkhand, Assam, West Bengal, Bihar and Odisha. They mostly speak Santhali, an Austro-Asiatic language that is the most widely spoken of the Munda languages. According to 2011 census, the total tribal population of West Bengal stood at 5.3 million. At 51.8%, Santhals represent more than half.

“They still follow their own age-old customs and traditions, where child marriages are common and any attempt to question the hierarchical set-up is met with strong resistance and disdain,” said Kartick Chandra Barman, assistant professor of history at Krishna Chandra College in Birbhum, who did a research on Santhals from 2010 to 2016.

“They still lag behind compared to the other communities of the district and their socioeconomic condition remains low,” said Barman. They are involved in cultivation and have lately ventured into labor work. “They don’t like change and consider it an intrusion in their routine life,” Barman told VillageSquare.in. This was obvious in their opposition against the girls playing football.

Barman pointed out that the literacy rate among the tribal population in the state stood at 57.93%, while in Birbhum district it was around 44.10%, out of which tribal male literacy is 46.20% and tribal female literacy rate is 25.70%.

Lakhi Hembram (17), a resident of Garia village said that their passion to play the game began two years ago when Uthnau, a local non-profit organization, encouraged them to take it up. “We were quite enthusiastic when they approached us with an offer to make us footballers,” said Hembram. “We thought that it might change our destiny and lift our families from poverty.”

“Thankfully, our families supported us but a section of the villagers expressed their resentment,” Hembram told VillageSquare.in. “The youth made sexual overtures and hurled expletives when they saw us practicing on the ground in shorts.” 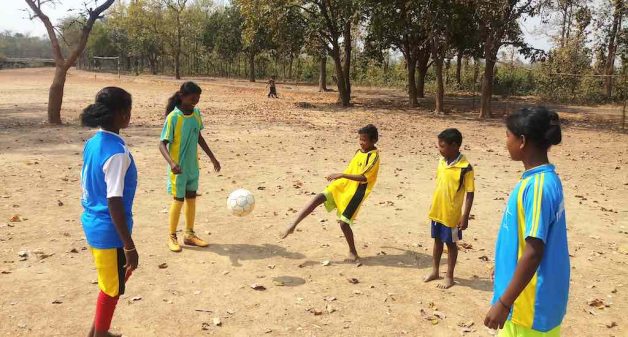 The girls make up for lack of facilities and infrastructure with determination and passion, confident that football will get them better prospects (Photo by Gurvinder Singh)

Though Birbhum is located just 190km from Kolkata, most of the girls had their maiden visit to the city in 2018 for a tournament. Since January 2018, the girls have taken part in several tournaments within the state and have won matches, besides winning hearts of the opponents and audiences. They have also played tournaments with boys’ teams and have performed exceedingly well.

Media reports praising the girls’ determination and hard work did not go well with the villagers. They decided to ‘teach the girls a lesson for portraying the community in a bad light.’

In November 2018, a group of villagers turned up on the ground in Garia where the girls were practicing and started raining blows on them. “They punctured our football with a needle, and then kicked and punched us,” 11-year-old Mitali Kisku told VillageSquare.in.

“The assailants pulled us by our hair and slapped us continuously,” said Kisku. “They threatened us of dire consequences if we didn’t stop playing football. We screamed for help but nobody came to our rescue.”

“We wanted to connect the tribal girls to the mainstream with an aim of empowering them. But had to face strong resistance by a section of the villagers,” Kunal Dev, secretary of Uthnau, told VillageSquare.in. “Our office was also gutted.”

When contacted, the village chief Dilip Kisku, whom the girls have accused of spearheading the assault, denied the allegations, and said tersely, “I did not beat them. These are false charges against me,” before disconnecting the phone.

Hembram, and 11 girls are staying in Uthnau office in Mallarpur, around 15km from their village after the villagers assaulted them. Apprehending more such attacks, they have started practicing in an isolated location.

Bamboo poles fastened together with ropes serve as their goalposts on an uneven patch of land surrounded by trees and wild shrubs. But the lack of infrastructure has not dampened their passion. “We strongly believe that football has the power to bring a change in the outlook of the people towards us who consider us backward and involved in odd jobs for survival,” said the girls.