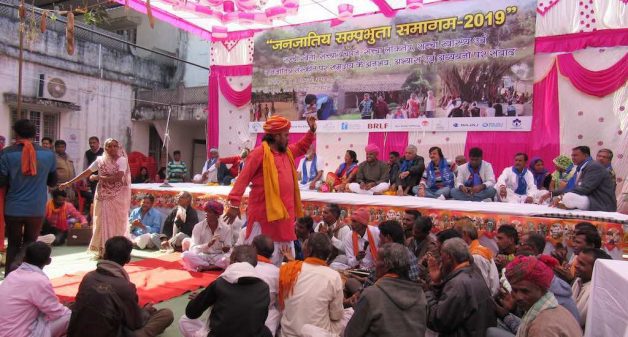 In India, padyatras (foot marches) are mostly about powerwalking. Politicians trudge miles in the dusty village roads before election, seeking votes. Protestors often march to emphasize their demands. Lately, lakhs of farmers have been marching to Delhi to highlight the agrarian crisis.

But padyatras in the tribal regions of southeastern Rajasthan, Madhya Pradesh and Gujarat (called the Vagad region) have a different subtext. They are a kind of dialogue marches devised by the farmers, to collaborate and find solutions to their problems

The farmers took cue from Mahatma Gandhi’s iconic 388 km Dandi march that mobilized mass support against draconian British laws. The dialogue marches provide the farmers an opportunity to interact with other farmers, discuss farm-related issues and other pressing matters of tribal communities and find a solution together.

Named the Tribal Farmer’s Sovereignty Dialogue March, the padyatras have been taking place for the past 25 years in the Vagad region. Facilitated by Voluntary Association of Agricultural General Development Health And Reconstruction Alliance (Vaagdhara), an NGO that promotes organic and nutrition-sensitive farming, they were started as informal interactions to understand farmers’ problems.

The first formal march started from Wadgun village in Banswara district, Rajasthan. The latest padyatra was conducted on a massive scale, lasting nearly a month. It started on 21 December 2018 from Mangarh Dham, covered 543 km spanning 190 villages and 105 panchayats located in the tribal belt of Vagad.

Each year no less than 200 village meetings take place during the padyatras. Before the padyatra, mentors and farm experts hold a brainstorming session to identify the tribal community’s main problems and to think of possible questions to activate the thinking process of the farmers. 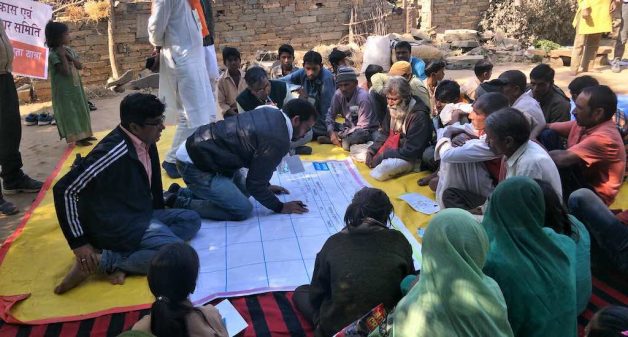 The march starts with a few members, and swells into a group of about 40 people by the time it reaches the centralized meeting location in the village in two to three hours. The team members first sensitize villagers on the themes and then hold an interactive session that often turns into focused group discussions.

“In addition to screening of short films, street plays are performed – sometimes involving the farmers – to help the farmers easily understand ways to solve their problems,” Rohit Samaria of Vaagdhara told VillageSquare.in.

The informal discussions mainly center on traditional food, traditional farming and self-sustainable farming that can fulfill the needs of small holding farmers. They also include development issues, as to how the tribes can be brought into the mainstream of development without disturbing their culture, customs and traditions.

Tribes constitute 76.4 % of the total population (Census 2011) of Vagad region. The farmers are mainly from Bhil, a Scheduled Tribe; they are extremely poor and illiterate. They predominantly depend on agriculture and animal husbandry for their livelihood along with some contribution from forestry, labor and minor contribution from diverse occupations.

Studies indicate sub-optimal nutritional status of children and adults of this community. The area has hundreds of indigenous food crops that have high nutritive value but are undocumented. The march helps create awareness about revival of nutrition-sensitive farming system amongst the small holding farmers.

The dialogues help train farmers in sustainable, integrated and ecologically safe farming. Jayant Garasia, a farmer from Josali village in Madhya Pradesh’s Jhabua district, said that the marches have helped solve their farm problems, and learn innovative farming techniques from other farmers who practice the same. The farmers also take a pledge to grow crops in a responsible, earth-friendly manner.

The dialogues helped Suman Dungri, a farmer from Kharsana village of Dahod district, Gujarat, realize their total dependence on seed companies for seeds that were not only ruining traditional farming but also the soil. She learnt that indigenous seeds are hardy, more suitable for local conditions, retain nutrients in the soil, require less water and nutritional inputs, in addition to having high nutritive value, fragrance and color. 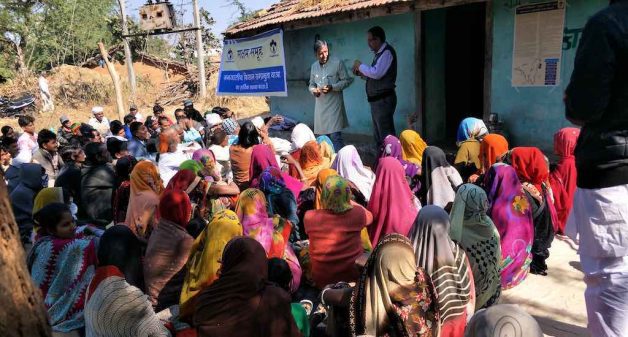 “I came to know about bandar bati, a wild nut without trans-fat, mostly found in our tribal areas, during a padyatra,” Dungri told VillageSquare.in. “I also learnt about the nutritive values of indigenous green leafy vegetables like chakod, chaulai and luniya.”

The dialogues have helped her learn that hybrid seeds are developed for specific conditions, and are more prone to pest attack and diseases, besides being expensive. “They have helped us revive traditional farming that we had almost forgotten,” she said. The highlight of the padyatras is that farmers display and share over 150 traditional seeds of cereals, legumes, leafy vegetables and fruits.

The dialogue marches culminate in a tribal conclave where all stakeholders including farmers, youth, government officials, farm activists and social activists gather to discuss and work on suggestions that are discussed during the walks.

There are suggestions to revive traditions like halma, where the community comes together to solve a problem, like water conservation and prevent decrease in level of ground water. “Suggestions like planting of five trees by each farmer, rearing of desi breeds of animals, promotion of micro irrigation and farming of millets keep coming up,” Kamla Bagore, a mentor from Kushalgarh, told VillageSquare.in.

They work on strategies to implement the suggestions, said Bagore. “There are also discussions on safety of children, prevention of child marriages, education, employment and migration,” she said. One of the main focuses this year was the protection of the tribal communities’ indigenous culture and customs.

A charter of demands prepared at the end of the conclave, is handed over to the government officials for follow up. “Since panchayat and government departments are also a part of the process, if there is any problem that needs their intervention it is done then and there,” Jayant Garasia told VillageSquare.in.

Special discussions are initiated with women farmers, who form the core base of farm workers. “Small but important things like the use of local clay utensils is also discussed,” said Sita. Anita Kumari, a woman farmer from Ghatol said that the marches have helped them immensely.

“We are no longer listeners but are able to voice our concerns freely, Anita Kumari told VillageSquare.in. “We discuss not only about farming techniques, but also about motherhood, parenting and health, besides good governance, accountability and transparency in government functioning.”

“We are no longer at the periphery. Empowered through these friendly dialogues, we are now able to use our natural resources optimally and grow crops without pesticides and fertilizers,” Sulochana Devi from Ghatol told VillageSquare.in. “This way I am doing justice to myself, my environment, my traditions and future generations.”

Rakhee Roytalukdar is a journalist based in Jaipur, Rajasthan. Abha Sharma is a writer based in Rajasthan. Views are personal.