The first khadi unit to be established in southern India at Hudali in Karnataka continues as a successful rural artisanal cooperative, supplying a variety of products to industries and urban consumers 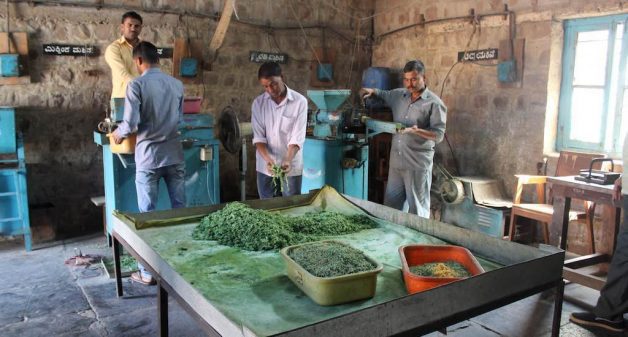 Gangappa Muddappa Malagi has never worn a dress of any fabric other than the locally spun khadi all his life. A staunch Gandhian, the 97-year-old freedom fighter who still wears a Gandhi cap has been associated with the Khadi and Gramodyog Sahakari Uttpadak Sangha at Hudali for more than five decades. He has been the sangha’s chairman for the last 32 years.

Hudali, a village located 28km from Belguam town in Karnataka, has remained true to Gandhian values. One cannot spot an arrack shop in the vicinity of this village. It was in this hamlet of North Karnataka that the first khadi unit of south India was established.

Hudali’s celebrated Khadigram was founded in 1923 by Gangadharao Desphpande, who is hailed as the Khadi Bhageerath of Karnataka. Since then, the modest cooperative, inspired by Gandhian ideologies of self-reliance, has generated employment for thousands of rural artisans in Belgaum district, sustaining commercially as well.

Malagi reminisced his idol Mahatma Gandhi’s visit to Hudali. It was a sultry summer day on 17 April 1937, a date etched in the memory of all villagers in Hudali. A team led by Gangadharrao Deshpande had made elaborate arrangements to bring Gandhi from the nearby Suldhal railway station on a bullock cart.

However, heavy rains spoiled their plans. “Gandhi walked all the way from Suldhal to Kumari Ashram where arrangements had been made for his stay,” Malagi, who was 16 then, told VillageSquare.in. A photo of Gandhi trudging his way, displayed at the village’s Gandhi Gangadhar Rao Smaraka Bhavan, bears testimony. 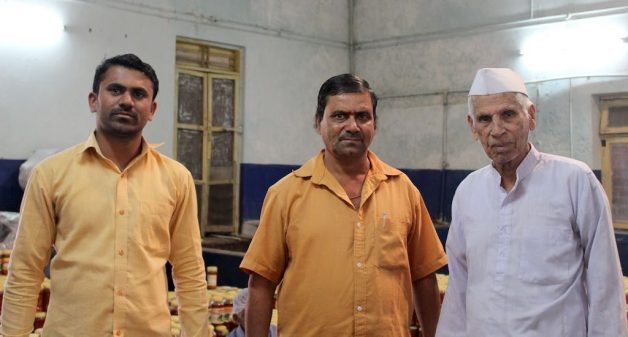 At the Hudali cooperative unit, Gangappa Muddappa Malagi (right) continues as chairman at the behest of employees (Photo by Amoolya Rajappa)

65-year-old Virupakshi Amrappa Balakundi has heard several anecdotes about Gandhi’s stay at the Kumari Ashram. He has preserved, among other records, copies of several letters Gandhi wrote during his week-long sojourn. “It was this historic visit that stimulated the zeal of our villagers to keep producing khadi,” said Balakundi, the sangha’s secretary.

“Such was Hudali’s dedication towards khadi production that many people from other villages and even North India came here to learn the art of spinning and weaving khadi,” Balakundi told VillageSquare.in. “It added to the fervor of the swadeshi movement.”

Post-independence, it was Jawaharlal Nehru’s push for cooperative movement in India that solidified the pioneering efforts in Hudali. In April 1954, Charakha Sangha – as it was called then – formally registered itself under the Society’s Act and began its operations with a share capital of Rs 500

“We have had many challenges, but it was the dedicated efforts of our selfless leaders like Malagi who helped sustain our efforts,” said Balakundi. Balakundi recalled the time when they produced a coarse khadi on outdated looms with two spindles in a rickety building, with three staff members and 21 employees.

Today, the cooperative has over 1,000 workers on its roll, most of them women. This includes 600 spinners, 220 weavers, 40 staff members and others employed in pickle making, soap making, incense stick making, etc.

The weavers and spinners are all from neighboring villages and receive payment on piece rate basis. Apart from khadi spinning and weaving, the cooperative also runs different small-scale industries that were started in different years along the journey. 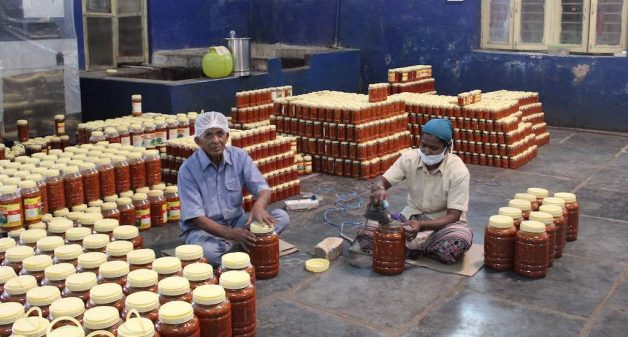 During the late 1970s and through the 80s, there was less rebate that hampered the sangha’s production. The board members decided to install gobar gas plants to run the looms. “Thanks to gobar gas, we reaped a benefit of Rs 1.5 million. The Khadi and Village Industries Commission (KVIC) had to re-check our audit that year as they were surprised by the huge margin,” said Balakundi.

By acquainting people about the profits gained through gobar gas, Hudali’s cooperative sector set a shining example in sustainable energy management. On demand, the sangha started building gobar gas plants, as one of their activities. Till date, the sangha has built close to 10,000 gobar gas plants across Belguam district.

Time and again, the Khadi and Gramodyog Sahakari Uttpadak Sangha has upgraded with relevant technology and made necessary changes in its functioning as per customers’ demands. In 2018, they ventured into e-commerce and partnered with platforms such as GoCoop.

The sangha caters to regular orders from various railway departments for porters’ uniforms and industries for workers’ uniforms. They also specialize in manufacturing khadi cloths that have high water absorption, used for cleaning machines. The sangha has supplied over 8 million such pieces in the last 10 years.

“A few of our markets demand constant supply. But, we persistently seek to explore new ones and so participate in various khadi exhibitions across the country,” said Balakundi, who has been with the sangha for four decades.

At the pickle-making section though, the technology remains old-fashioned. 71-year-old Devappa Kamar may be the oldest worker at the unit but his hands move quickly in packing huge bottles of freshly made lemon pickle. “I love my job because it involves making better quality products that ensure better profits for all of us,” he told VillageSquare.in.

The pickle making unit has an enormous storage capacity of 220 tons that is used to cut and store mangoes procured during the peak season. The age-old technique uses no chemical preservatives. The sangha’s trademark Jawan pickle is in huge demand in the northern parts of Karnataka and sells for nearly Rs 7.5 million every year.

34-year-old Vijaylakshmi Nelvade is among scores of women who earn a decent living through the vocation of pickle-making. “The profession keeps me occupied and gives me a sense of being productive,” she told VillageSquare.in. “Moreover, it helps me save some money.”

The soap-making unit is famous for producing the nominally priced green bars of herbal soaps known as Kutir soap, made of anti-bacterial neem oil.

“We have come a long way from being a no-loss, no-profit venture to a thriving cooperative, made possible because each employee here works towards a shared dream based on Gandhian philosophies,” said Balakundi.

Last year, Hudali’s 75-year-old cooperative recorded an impressive sale of products worth Rs 46.80 million and a net profit of Rs 1.6 million. The sangha holds workshops in schools and at panchayat level, to acquaint the youth about the importance of sustaining khadi production as a cooperative.

Easy procurement of raw materials, smoother textures of the cloth and incentives provided by the state government have all contributed to the success of the cooperative. As a result, from being the fabric of Indian independence, khadi has evolved to carve its own niche among other textiles in a competitive market.

However, for both Malagi and Balakundi, leading the cooperative has never been about money. “Khadi for most of us here at the sangha is and will always be a symbol of self-reliance and patriotism. It is a one of the most cherished Gandhian ideologies and we want to keep it alive in our own small way,” said Balakundi.