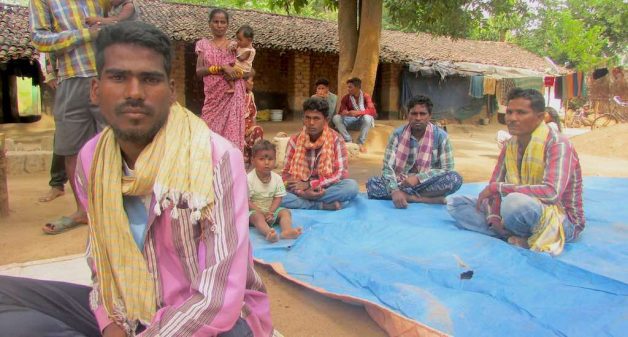 Dasarathi Lahajar and the others from Kalahandi district, who migrated to Telangana for work, had to be rescued from bondage (Photo by Rakhi Ghosh)

It was in October that Dasarathi Lahajar, a 26-year-old youth from Khandidanguriguda village in Kalahandi district, one of Odisha’s migration-prone districts, went to Mahbubnagar in Telangana. He went with 17 persons from his village to work in a brick kiln.

Lahajar dropped out of school and started working as a daily wage laborer when he was 15 to support his family. “To repay the loan my father had taken for my sister’s wedding, I started migrating to other states to work at construction sites,” said Lahajar.

There are many like Lahajar who migrate to other states for labor work. Distress migration is rampant in the western parts of Odisha. While villagers migrate with the hope of making a better living, what greets them at the destination sites are arduous working conditions, extremely low wages and bondage.

When a middleman took Lahajar and the others, he promised them work at construction sites in Rayagada district for a month and offered Rs 2,000 per person, with weekly pay of Rs 400 to each family. But on reaching Rayagada, he took them to Kantabanji, a small town from where migrants travel in trains to neighboring states.

“From Kantabanji, he took us to Mahbubnagar in Telangana and forced us to work in a brick kiln,” Lahajar told VillageSquare.in. As the workers had already taken advance from the middleman to meet household expenses, they agreed to work as loaders. However, things started to change after a few days. They were forced to work for long hours and even women and children were not spared.

When the workers opposed working for long hours, the supervisor started abusing and harassing them. “He would beat us and force us to work without food and rest,” Keturam Majhi told VillageSquare.in. “The owner of the kiln also threatened us of dire consequences if we informed anyone.” 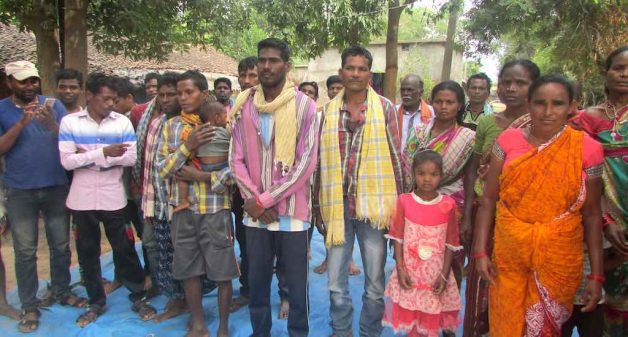 Rescued from arduous working conditions, low wages and bondage, villagers are plagued by poverty on return (Photo by Rakhi Ghosh)

The owner had taken away their mobile phones. But one of the laborers, who had hidden his mobile phone, informed a social activist in their village. The activist enlisted the help of the district administration and rescued all the laborers who were working under bondage in the kiln for more than a month.

No rescue from poverty

After being rescued from bondage, the villagers, mostly young people, were back in Khandidanguriguda, but without work. A few women went to agriculture fields to work as farm labor, leaving their children with older women. As the government daycare center is far from the village, children are deprived of food and education.

The villagers prefer to work in their own village, or within the district. “We want work but there is no work available in our village or in any nearby place. So we migrate to other states for survival,” Duryodhan Mahalik, who has studied till class X, told VillageSquare.in.

They are entitled to ration of food materials through the Public Distribution System (PDS).  The women who work as agricultural laborers during the farming season get rice as remuneration for their work; this feeds their family.

“In most of the villages you will find rescued bonded laborers but they are not being given release certificates and the compensation of Rs 19,000 that would be of great help to them,” Madhav Sunani, the social worker who helped the bonded laborers return from Mahbubnagar, told VillageSquare.in. “Thus, three persons from this village have migrated again, to another state to earn their livelihood.”

At the behest of a middleman, 49 villagers from Shekhpada village in Junagard administrative block went to Pochampally in Telangana in December 2015 to work in a brick kiln. At the destination site, they were abused and harassed and were given Rs 300 per week.

The issue came to light when one laborer died under the harsh conditions and a pregnant woman lost her child. The administration, with the help of a local NGO, rescued the villagers in 2016. They have been waiting for nearly three years to get compensation and rehabilitation support from the administration.

Neenu Thomas, director, International Justice Mission, an organization that rescues bonded laborers, said that workers from a neighboring village are facing the same problem, as they have not received the release certificate that should be issued by the destination state where the rescue took place. “Release certificates are extremely important for applying for government benefits and entitlements,” Thomas told VillageSquare.in. 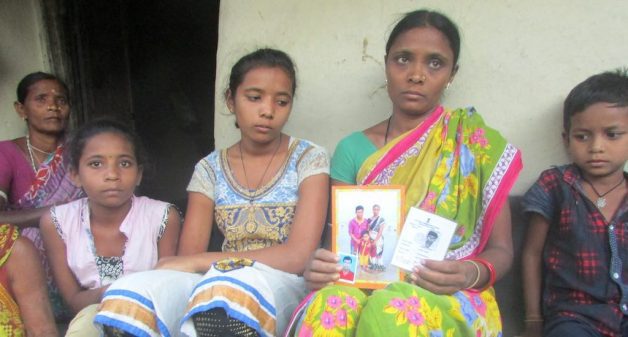 Reena Mahalik shows pictures of her husband who went missing in Goa, the destination site (Photo by Rakhi Ghosh)

Sadashiv Mahalik (37) of Chhuriagarh village in Junagarh block went to Goa in July 2018 to work at a construction site. During Nuakhai, a local harvest festival, he telephoned his family. Since then he has been missing and his family has not heard from him. His family members are clueless about his whereabouts.

“My husband went to earn and now it has become difficult for the family to survive,” Sadashiv Mahalik’s wife Reena told VillageSquare.in.  With three children and elderly parents, the family subsists on monthly ration from PDS. The son has had to drop out of school for want of money.

“The youth who migrate to other states to work in construction sites have no knowledge about migrants’ rights,” Dillip Das, an activist working for the rights of bonded laborers in Kalahandi district, told VillageSquare.in. He said that there have been many instances of laborers losing their life, going missing, being attacked, abused, and mutilated, and of women being physically and sexually harassed and pregnant women miscarrying.

Poverty, debt, drought, farm distress and lack of employment opportunities are the reasons for migration from villages of western Odisha including Kalahandi district.  Even youth who have finished higher education are migrating to work as daily wage labor, so as to support their family.

In Odisha, till now close to six million people have registered as job seekers under the Mahatma Gandhi National Rural Employment Guarantee Act (MGNREGA) – 2005. In the last three years, an average of two million people were provided employment and less than 1% of the households got to do 100 days of work.

Irregular wage payment, non- availability of work on a regular basis, corruption and MGNREGA governance continue to remain huge challenges for the state.  “People have started losing faith in MGNREGA, as they are dependent on their daily wages for sustenance, but do not get paid immediately,” said Umi Daniel, Director, Aide et Action International.

In rural areas, distress migration has become an escape route from poverty and unemployment, so there is an urgent need to create safe communities who are equipped with information and understanding to tackle adverse situations. This can be made possible through registration of migrants at panchayat level and by creating community support groups for safe migration.

Rakhi Ghosh is a Bhubaneswar-based journalist. Views are personal. She won the PII – ICRC first prize in 2018 for her story on safe drinking water published in VillageSquare.in.