Switching from traditional crops, farmers of Mysuru district in Karnataka have boosted agricultural income by cultivating chia seeds, which are becoming popular in India because of their nutritional value 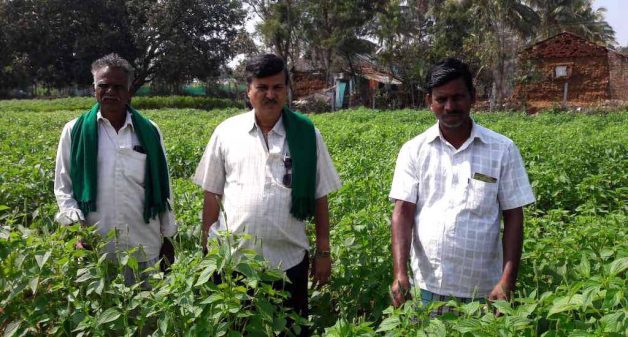 Kurubur Shantakumar, flanked by his farmer friends in a field of chia, the crop that has brought them good financial benefits (Photo by Hiren Kumar Bose)

“Earlier we worked like slaves in our own farms,” said Madappa of Bidarahallihundi village in Heggadadevana Kote taluka of Mysuru, standing in his chia farm, adjusting the green shawl – a must-have clothing accessory of most Kannada farmers – thrown over his white shirt. “But now we are like kings.”

As the climatic conditions of Mysuru district favored crops like rice, sorghum, ragi, pulses, sugarcane and tobacco, farmers here have been growing them for generations. Farmers of Mysuru, known for the pomp and gaiety of its traditional 10-day-long Dasara festival, are writing a new chapter, growing this popular crop that retails for Rs 100-odd for 100gm in metros.

Farmers who grew traditional crops like tobacco, millets, etc., said that their life has been transformed after growing chia. Hundreds of chia seed growers in villages of Mysuru district have enhanced their agricultural income without any government intervention.

Among Mysuru’s horticulture crops are Nanjangud Rasabale banana, Mysuru betel leaves, Mysuru mallige (jasmine) and Erengere brinjal, which are however vanishing due to the state’s indifference and the changing preference of the consumer. In recent years, it’s the chia seeds that have brought the district into limelight.

Chia seeds have been available in health and lifestyle stores in the country’s metros, having been imported from Mexico. It was the team of Ram Rajasekharan, former director of Mysuru-based Central Food Technological Research Institute (CFTRI) and his colleagues, biochemist Malathi Srinivasan and plant breeder R. V. Sreedhar that introduced chia as a crop among Indian farmers. 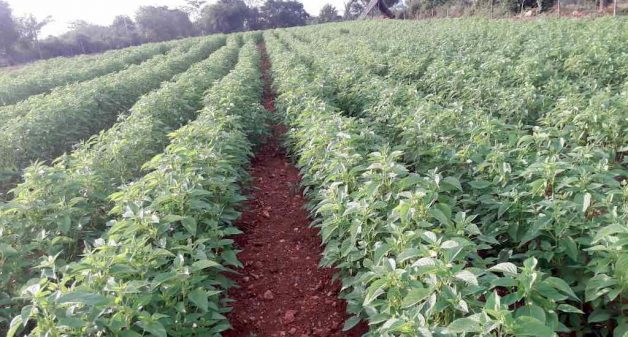 A chia farm in one of the villages of Mysuru district, where the acreage under chia cultivation is increasing (Photo by Hiren Kumar Bose)

In October 2014, CFTRI organized an all India farmers’ empowerment program, where hundreds of farmers who had come from different parts of the country were gifted 100gm pouches of chia seeds along with information on agronomical practices to be followed.

Unconvinced by the claims of the researchers, some of the farmers discarded the seed pouches; but a handful of Mysuru farmers planted them. Farmer Madappa (62) sowed chia in a quarter-of-an-acre while in the rest of his 15 acres he continued with tobacco, sugarcane, cotton and millet. After three-and-a-half months, he harvested 80 kg of chia seeds and gifted it back to CFTRI.

“What I have been earning from chia is in no way comparable to what I get from all the other crops put together,” Madappa told VillageSquare.in. “I grow chia in about five acres. I harvest nearly four quintal per acre and receive between Rs 150 and Rs 200 per kg. In off-season it’s nearly Rs 300 per kg.”

On an average, farmers harvest about 8-10 quintals of ragi (finger millet) per acre with cultivation costs ranging between Rs 10,000 and Rs 15, 000. The cultivation costs of chia is a couple of hundred whereas the yields are 3 quintals an acre for the white variety and about 5 quintals for the black variety. While ragi fetches around Rs 2,500 per quintal, white chia brings Rs 22,500.

A plant of South American origin, chia (Salvia hispanica), a popular nutraceutical, is a rich source of Omega-3 fatty acids and is gaining popularity across the world because of its nutrition value. Chia seeds contain slightly fewer calories compared to flax. It has more fiber and contains 1.5 – 2 times more of the bone-strengthening minerals calcium and phosphorus, as well as slightly more iron. 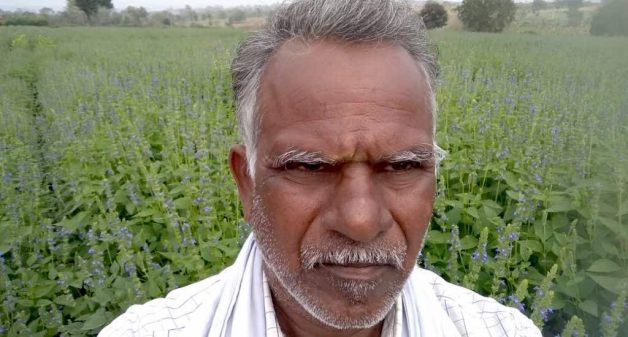 Elaborating on chia’s importance in our diets, Rajasekharan said that unlike flax seeds, it does not contain anti-nutrients like cyanogenic glycosides. “Secondly, since 2000, India has been witnessing increased use of sunflower oil, which has resulted in a drastic imbalance of the essential fatty acids with more intake of omega-6 fatty acids,” he told VillageSquare.in.

“We encountered stiff opposition from the public at large and the research community for introducing an alien crop, and not promoting traditional millets,” recollected Rajasekharan. “These are the people who don’t know that millets originally came from Ethiopia.

“It’s a crop that hardly needs any inputs or fertilizer; cattle and wild animals do not prefer them,” Kurubur Shantakumar (58), founder of Raithamitra Farmer Produce Company (FPC) and one who has been growing chia in three acres in Bidarahallihundi village, told VillageSquare.in.

Most farms in the district are on the periphery of forests or what is known as the Mysuru Forest Division. Though not a part of an elephant corridor or migratory route, it witnesses incidences of human-elephant conflict as herds destroy crops. The farmers said that chia farms have not been affected.

A plant that prefers shorter light periods, chia is sown after June-July or in October-November. Chia would be harvested by March, as being practiced by the Mysuru farmers for the past five years. What began as an experiment with a handful of farmers has increased to chia being grown in over 300 acres involving 200 cultivators.

Assisted by CFTRI, chia growers formed the Raithamitra FPC in 2014 and presently have 1,200 members. It promotes cultivation of chia, with a buyback offer. From vegetables and food grains to fruits, Raithamitra buys produce from farmers and sells them to entrepreneurs. Having recently launched chia seeds for supermarkets, it plans to launch chia oil, which is likely to retail for Rs 6,000 for 100gm.

Almost all the villages have about 250 families. Every village has a high school. For further studies children travel to nearby towns, commuting in state transport buses. On completion of studies, they seek jobs in towns, unwilling to work the family-run farms. With chia promising handsome returns, elders hope that the youth would return to farming.

That is exactly what Puneeth Kumar Jain of Hullahalli village in Nanjanguda taluk did. Having worked for an electronics firm for a couple of months, the 21-year-old diploma holder has returned to his village to take up farming. Speaking to VillageSquare.in he said, “Why should I work for someone else when I can be my own master and employ others too?’’

Puneeth’s family owns a 10-acre farm plot and traditionally grows tobacco, ragi and sugarcane. The success stories of chia farmers have motivated him too. He has set aside two acres for growing chia and plans to increase its acreage in the coming years.