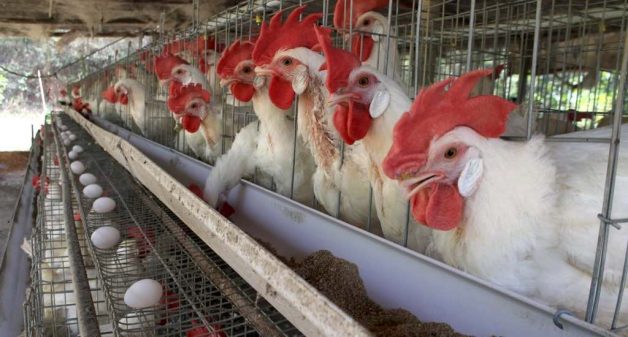 “You want to go to andaichi gaon (eggs village)?” asked the auto rickshaw driver as I alighted at Sawantwadi station, having arrived by the Konkan Express and inquired about Wados.

About 30 km from its sub-district headquarters at Kudal, the 250-odd household village of Wados in Sindhudurg district has earned the sobriquet of ‘andhaichi gaon’ as most villagers have taken to layer poultry farming (LPF) and produce around 3.70 lakh eggs per month.

However, it was not so just two years back, as most of them eked out a living, tending their mid-sized farm plots growing paddy, vegetables and lentils, sourcing water for irrigation from Karli River coursing through the village or doing odd jobs in Sawantwadi town, 20 km away.

With each day, the number of villagers taking to LPF is increasing, thanks to the assistance provided by a non-governmental organization (NGO), funds from the local district cooperative bank and the involvement of a local trader, who besides picking up the produce provides the poultry farm owners with feed, bird cages, egg trays and poultry medicines.

Andhra Pradesh, Tamil Nadu, Haryana, Maharashtra and Punjab are the leading egg-producing states in India in the same order. There is a rise in egg production in India owing to the increase in consumption, besides lower production costs.

According to Mahadev Jankar, minister for State Animal Husbandry Department, the demand for eggs outstrips production in the state, forcing it to import around 2 crore eggs daily from Karnataka, Andhra Pradesh and Namakkal in Tamil Nadu, India’s egg export hub which accounts for over 90% of India’s total egg exports. 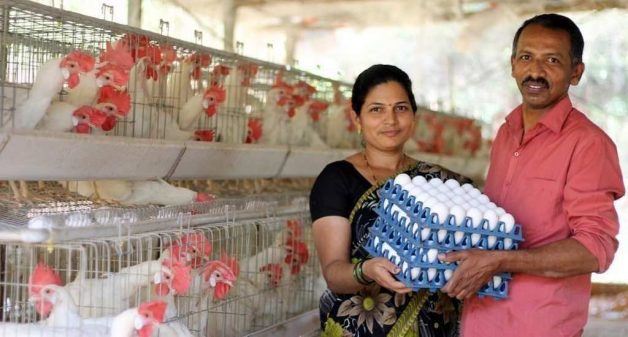 Layer poultry farming in Wados has increased the household income of farmers like Sarita and Prakash Rane, helping Sindhudurg towards self-sufficiency (Photo by Hiren Kumar Bose)

Sindhudurg district consumes around 15 lakh eggs a month, a major percentage of it sourced from Hospet in Karnataka. With production in Wados increasing, the supply of eggs in Sindhudurg is on the path to self-sufficiency, albeit slowly.

The Wados experiment began with Bhagirath Gramvikas Pratishthan (BGP), an NGO working among villages of Sindhudurg in setting up biogas units, training farmers in organic methods, assisting in setting up LPF, etc. identifying a group of 32 men from the village and training them at Pune-based Dr B. V. Rao Institute of Poultry Management and Technology in October 2016.

BGP signed a memorandum of understanding with the Sindhudurg District Central Cooperative Bank (SDCC Bank) and Shree Mhadgut Brothers, which is into poultry development. “More and more villages are expressing interest in LPF,” Prasad Deodhar, director of BGP told VillageSquare.in.

With a loan ranging between Rs 3 lakh and 3.5 lakh provided by SDCC Bank, the farmers set up sheds with 300 chicks. While the men received training to run poultry farms, the loans were issued to the women of the household. As a gesture of support to the new entrepreneurs, the district authorities provided each farmer with a subsidy of Rs 20,000.

The prospective poultry owners were provided with 36-day old BV-330 (white) variety chicks that came from Andhra Pradesh based Venkatesh Hatcheries, costing Rs 5 each. The chicks are fed soybean and corn, the feed limited to 100gm a day. The bird lays eggs for 400 days, totaling 330 eggs in its life cycle, before it is sent to the slaughterhouse.

“We have plans to set up 250 more farms in the next three years so that Sindhudurg becomes self-sufficient in egg production and sells the surplus to neighboring Goa,” said Deodhar.

Every second or third day the trucks of Shree Mhadgut Brothers arrive to pick up the eggs and make the payment for the produce. The price of the eggs is fixed annually with the consultation of all the stakeholders and presently the farmer receives Rs 3.80 per egg.

“In the first year when LPF was in its pilot stage, we made a loss of 12 paise per egg, part of it was compensated by the villagers,” Dinesh Mhadgut of Shree Mhadgut Brothers who doubles up as a school teacher at Hirlok village, told VillageSquare.in. “When we make a profit too we share it with farmers. For all of us, it’s a win-win situation.”

Over the years the poultry farmers who began with 300 chicks have increased their chick possession to 2,000 birds. The Wados model is being replicated in neighboring villages of Redi, Shirgaon, Dodamarg, Variwada, Gothos and others.

“Till date, we haven’t had a defaulter who has failed to deposit her equal monthly installment (EMI) repayment. We have had several farmers repaying the loan amount within 10 installments,” Mandar Mahadev Chavan, assistant manager, loan department, SDCC Bank, told VillageSquare.in.

What is remarkable about Wados is its sustainable model. While egg production has ensured enhanced revenue, it has made the villages energy sufficient too. With each household having a biogas unit in its backyard that is fed by poultry waste, the energy requirement for cooking is ensured.

“It’s a 24/7 job taking care of the poultry farm, which my wife and I do,” Prakash Rane, one of the first batch of villagers who took to LPF in 2016, told VillageSquare.in. Beginning with 300 chicks, presently he has 1,200 of them. He also happens to be one of the farmers who have installed a conveyer belt to deposit the poultry excreta directly to the biogas chamber, while earlier the cages had to be cleaned manually.

The slurry from the biogas units too has its use as a natural fertilizer for farming to grow paddy, mango, cashew, bamboo, etc. Summing up Wados’ success Deodhar said, “Besides food security, LPF has provided the villagers with energy security too. It’s a model which can easily be replicated.”