The wilting of organic paddy in a coastal farm was misdiagnosed as due to soil salinity, but was actually a pest attack brought on by an overdose of organic insecticide and nitrogen-rich manure 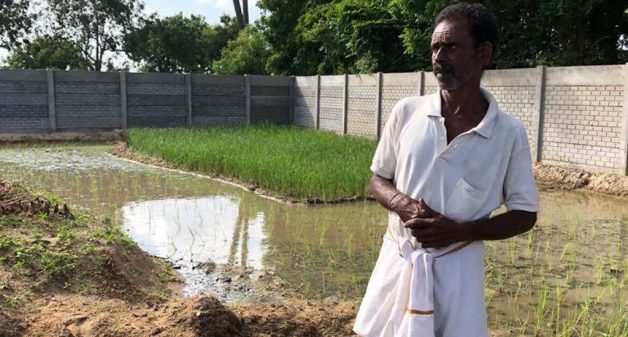 With the native Thooyamalli paddy saplings ready for transplantation, Govindasamy believed everything was under control (Photo by Sathya Anbajagane)

My farm help Govindasamy and I thought we had a grip on organic paddy farming, especially with native rice varieties, after a successful maiden harvest in November 2018. The farmland, measuring 29 cents and with a large open well, is in Thiruvidandhai on Tamil Nadu’s East Coast Road, about 40km from Chennai.

The soil in the farm, which is about 2km from the Bay of Bengal coast, is sandy clay and termed as kalari in Tamil. Local farmers raise a single rain-fed paddy crop (October–January) through conventional farming.

The local farmers had completed their paddy harvest for the year. They had been watching and supporting our organic practices, though with a little skepticism. They strongly dissuaded us when preparation of the land for the second crop was started.

However, the land was prepared for the second sowing season by gradually administering cow dung manure, dry leaf compost, groundnut and neem cake over a two-month period. By the third week of January 2019, the saplings of traditional Thooyamalli variety were transplanted. It was a conscious decision to choose native paddy varieties suitable for saline conditions.

The farmers said that based on their experience, the increased salinity of the well water towards summer and the soil type in the area allowed only rain-fed crops to be cultivated. They challenged that it would not be possible to harvest even a handful of grains this season.

The farm help Govindasamy, a conventional paddy farmer himself, was all geared up for the challenge. His enthusiasm turned high since our conventional farmer neighbor brought in an agricultural officer to exhibit our organic methods and native crop.

Govindasamy was suddenly the center of attention among the farmers in the neighborhood. This also led to peer pressure and he was overcome by desperation to succeed on any account. He convinced me to implement the agricultural officer’s suggestion that any manure should be administered within 60 days of transplantation to help the crops grow well and produce more tillers, and hence more grains. 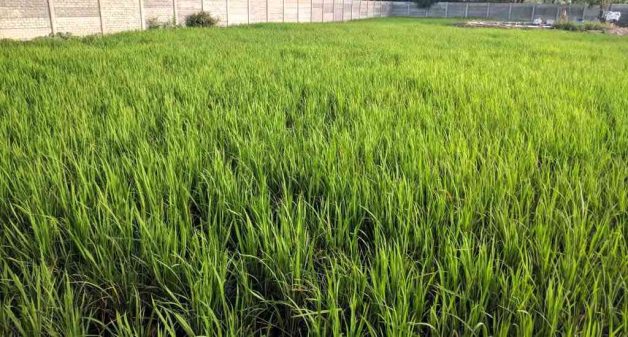 In the last week of February, while our crops were hale and healthy, we administered seaweed manure and neem cake. Being the only cultivation in progress in the area, Govindasamy was nervous about our crops being the easy target for pests. As a precaution, he administered garlic-ginger-chilli spray every two days.

In the first week of March, we noticed a circular patch of crops yellowing and browning, almost with a burnt look, which quickly spread to a wider circle. The local farmers were convinced that yellowing and subsequent browning were the symptoms of water and land salinity during summer.

With a strong conviction that farmers would be right in basic diagnosis of the symptoms of failure, people were consulted about tackling salinity in the well water and different techniques were tried out to manage the situation.

Twigs of gooseberry tree were dropped into the well to reduce salinity. It did reduce the salinity, but with no impact on the crop. We were advised to have standing water at all times to avoid salt deposits on the soil. Irrigation was done frequently, but with less volume to make sure only the top water in the well was used.

Based on advises, palm jaggery was used instead of sugarcane jiggery for preparation of effective microorganisms (EM) solution, for a relatively cooling effect on the crops. Insecticide spraying was stopped, as Govindasamy believed that the heat was causing the browning and withering of the crops.

By end of April, while trying out different remedies for salinity, more than half of the crop was lost to yellowing, browning and dying. However, a few Poongar paddy crops that had grown from the previous season were untouched by the symptom and were healthy.

We noticed black soot forming at the base of the dying crops. As the crops decomposed into the standing water, a strong stench similar to that from an open drainage emanated from the farmland. The remaining crops were unevenly developed, with a few matured, a few about to mature and the rest with stunted growth.

At this point, I decided to stop asking around and searched online, keying in the symptoms of the crop. On keying in ‘paddy crop yellowing in patches’, Tamil Nadu Agricultural University’s (TNAU) page on pest management of organic paddy popped up. Expecting to find information on managing salinity, I was surprised to see a picture of hopper burn, one of the diseases listed under pest management.

The pictures looked exactly like the scene at our farm. The information talked about pests attacking the roots of the crop, leading to the plants browning in patches and to a burnt look, honeydew formation at the base and the appearance of black soot.

The information seemed to point that it was this disease afflicting our crops and the issue had nothing to do with salinity. When Govindasamy pulled out the half-dead crops, there were tiny rice-like worms feeding on the roots and several large yellow larvae in the subsoil.

I was disappointed with myself for blindly trusting the conventional farmers’ instincts on diagnosis, lack of knowledge on pests and not researching sooner on this. 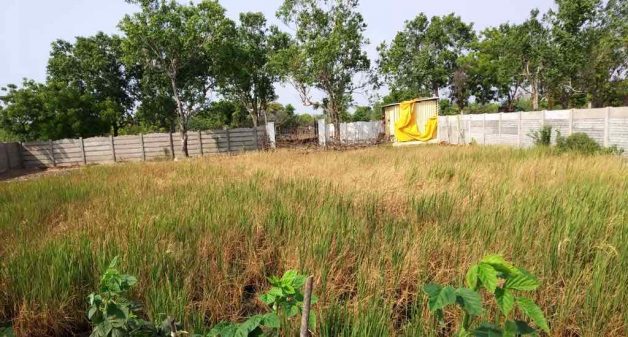 The probable causes for the hopper burn disease were given as transplantation with very less space between saplings, overdose of nitrogen-rich manure, overdose of insecticides and not enough weeding. We were culprits of all the factors mentioned!

Though we did not have confirmation from an expert, based on our findings, we took it to be hopper burn disease and proceeded to implement the remedial actions. The management strategy provided on the TNAU page noted with caution that the remedial measure would work only when the disease was at the nascent stage. Otherwise, the disease leads to 100% crop loss.

As the first step, irrigation was stopped. The land was allowed to dry out completely, while spraying neem-based insecticide intermittently at the base of the crops. The irrigation water was drained out for the first few minutes, to remove the dead pests, soot and the stench.

EM mixture was sprayed for water purification in the land, as well as for rejuvenation. This process was repeated. There were dead worms and larvae in the water but browning of crops was not effectively contained. Currently, we watch as even the matured crops wilt and wait for the inevitable to happen, to start afresh.

Like the rest of the world, farmers are also driven by competition. The measure is in terms of number of bags of yield per acre. The farmers I interacted with do not maintain accounts for the input costs, to assess the profit margin. They believe doing so will bring ill omen and loss.

The farmers are not aware of most pests, as they never encounter them in conventional farming. Their crops are literally vaccinated against potential diseases through scheduled administration of chemical pesticides as per their crop vaccination schedule card!

Spacing between saplings during transplantation is not given importance, as chemicals are used to control weeds. Farmers, traditional wisdom having been lost, are used to mechanically following instructions, without having to worry about day-to-day maintenance and making decisions.

Though an expensive lesson, we have learnt that even administration of organic manure or insecticide has to be done with discretion. The patience to wait until the crop shows signs of needing more nutrition or pesticide is invaluable. As the only organic farmer in Thiruvidandhai, I realize that success of our farm can have the much-needed positive impact on the farming practices in the area.

Sathya Anbajagane developed software as a civil engineer and is currently a development professional based at Chennai. Views are personal.

Sathya Anbajagane developed software as a civil engineer and is currently a development professional based at Chennai.