A combination of reshaping land and harvesting rainwater has helped farmers in the Sundarbans to overcome soil salinity and increase farm incomes. They now need consistent technical support 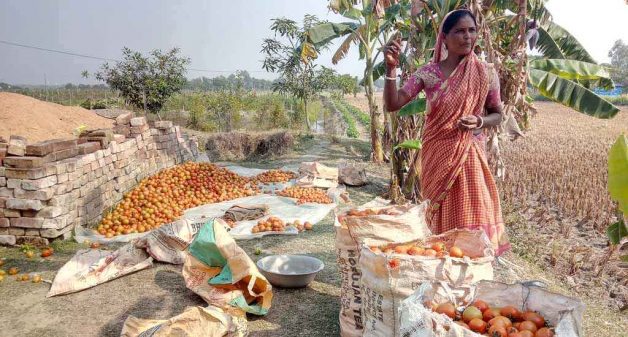 When Panchanan shifted from Dakshin Mokamberia to Motgora village in Basanti block more than five years ago, about 70% of villagers migrated regularly because of low farm productivity. Farmers mostly grew one crop a year; when land was left fallow after kharif harvest, salinity set in. The Sundarbans in the Gangetic delta is known for its soil salinity, which is aggravated by prolonged waterlogging during monsoons.

The acidic sulfate soil of the region created problems of nutrient management and overall soil management too. Lack of freshwater for irrigation was also becoming a problem in the rabi season, and the villagers did not wish to continue farming.

Today Panchanan grows cucumber, yard-long beans, bitter gourd, cauliflower, tomatoes and winter rice in his father’s land that measures a little over two acres. He also grows fish in his farm pond and earns about Rs 2 lakh in profits in both kharif and rabi seasons for his family of seven. Migration in the area has decreased by about 80%.

In 2009, Cyclone Aila left behind a trail of destruction, severely affecting agriculture in the region. Global Environmental Facility funded a project on sustainable management of degraded coastal land to ensure livelihood security of the farming community, through National Agriculture Innovation Project (NAIP) of Indian Council of Agricultural Research.

With many local institutions as partners, the project was implemented from 2009 to 2014 in Canning I, Basanti, Patharpratima, Mathurapur II, Kultali, Namkhana and Kakdwip administrative blocks in South 24 Parganas district and Sandeshkhali II block in North 24 Parganas, which were affected by the cyclone. 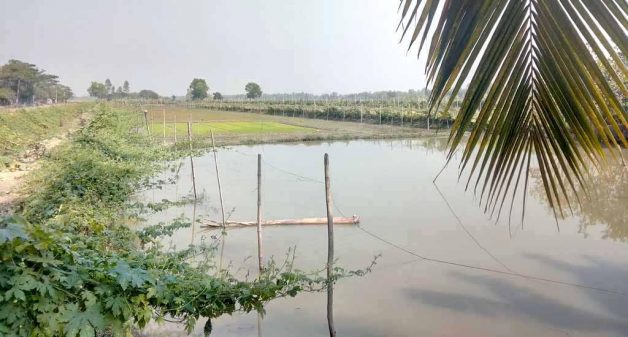 The land shaping techniques used were construction of farm ponds, furrow and ridge farming, and paddy-cum-fish farming. Panchanan utilized the high ridge and deep furrow and farm pond techniques, where 50% of the farmland was shaped into alternate ridges and furrows and remaining 50% land was developed into a pond.

Rainwater harvested in furrows and pond is used to grow a range of vegetables through the year. The root zone soil stays relatively saturated with fresh water during the initial dry months after kharif, reducing the upward capillary flow of brackish water and reducing salinity build-up.

In Dakshin Mokamberia and Motgora, Panchanan and 70 farmers learnt land-shaping techniques from the CSSRI scientists. As efforts bore fruit, another 260 farmers opted for land shaping of their fields, quite a few doing so at their own cost.

The intervention made Panchanan shift from kharif rice mono-crop to a multiple crop cycle of kharif vegetables, winter rice and rabi vegetables, helping him earn more and stay back in his village. The farm pond was used for paddy-cum-fish cultivation during kharif. For two consecutive years, Panchanan earned Rs 50,000 selling fish.

Over the 5-year intervention period, 1,583 households benefitted. Profits from growing vegetables in the kharif season varied between Rs 30,000 and Rs 50,000. In general, farm incomes went up six to 10 times even in the poorest households.

“However, salinity is a severe problem and the amount of water harvested in the farm ponds may prove insufficient to overcome salinity. That makes us anxious and fearful of how the soil would be in future,” he told VillageSquare.in.

Today, Dakshin Mokamberia and Motgora farmers face problems with cucumber and tomato, the two main income-earning crops. The problem stems from soil health and application of unsuitable fertilizers and pesticides, without consulting local experts at the office of Assistant Director of Agriculture (ADA), Basanti.

In Dakshin Mokamberia, pests attacked the cucumber crop in Gautam Bera’s one-acre plot quite early. “Parimal Manna (who did land shaping at his own cost) is attending a meeting on organic inputs. He will find a solution,” Bera told VillageSquare.in. Bera had not consulted the ADA’s office. The local agri-input dealer had suggested the dosage. 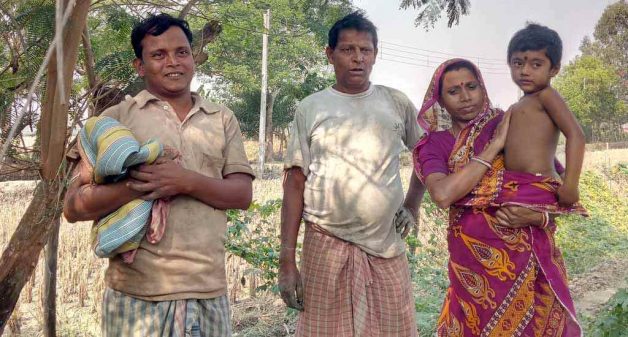 Panchanan, who reaps the benefits of land shaping in his father’s farm, is apprehensive that rainwater harvesting will not be as effective in lowering salinity in the future (Photo by Dhruba Das Gupta)

Burman finds this a trenchant problem. “Taking cognizance of this, the government has created a diploma course in agriculture extension services for input dealers. Some states have a rule that anyone applying for a dealership license for fertilizers and pesticides has to go through compulsory training. But after obtaining the license, dealers may not sit in the shop, so the problem persists,” he said.

Indiscriminate use of pesticides may negate gains of using organic fertilizers, as a field visit showed. Another problem is paucity of advice regarding production planning.

Narugopal Halder has less than an acre of ridge area to grow vegetables, and two farm ponds for irrigation and pisciculture. His important need is to meet the needs of his family of four and thereafter grow surplus. With nobody to offer advice, he suffered a loss this year as he grew freshwater carp with brackish water prawn – a poor combination.

“The ADA office turns a deaf ear when individual farmers seek advice. They are more interested in working with NGOs and farmer groups,” said Panchanan. Repeated attempts to get a response from the ADA’s office in Basanti proved futile.

The project undoubtedly showed what scientific intervention can do for farmers’ livelihood. Totally 13,200 households participated in NAIP’s project. However, as ground realities change and farmers face new issues, handholding by local institutions is a must to consolidate the success.