Failing monsoons forced Lambadi tribes in Sittilingi valley of Tamil Nadu to migrate, but a revival of traditional embroidery by women has enhanced household incomes and stemmed migration 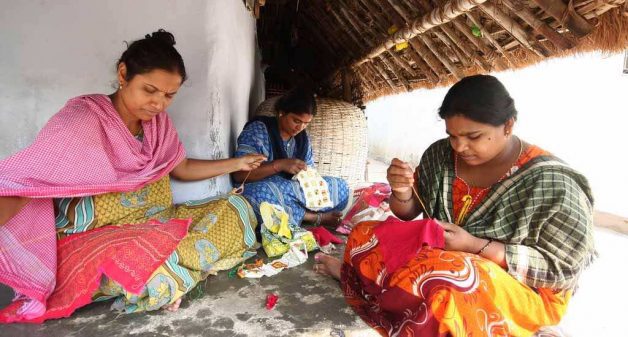 As she kept embroidering, Sunitha kept an eye on her children, besides her nieces and nephews. The children were playing near the thatched roof hut in Sittilingi Thanda. Thanda is a settlement of the once-nomadic Lambadi tribes.

Sittilingi Thanda is in the Sittilingi valley in Dharmapuri district that is placed at the bottom among the districts of Tamil Nadu in multi-development poverty index. With monsoon failures, the Lambadis, who once led a sustainable life in terms of food and nutrition by farming locally, also lagged in development.

A revival of the Lambadi women’s famed embroidery has not only ensured the sustenance of the craft but also livelihoods, effectively helping households to stay back in their villages, instead of migrating for labor work.

Traditionally, Lambadis were a nomadic tribe. They came to Gujarat and Rajasthan from Afghanistan and then migrated south with the Mughal army, according to Lalitha Reji, one of the founding physicians of Tribal Health Initiative (THI), a rural hospital that works on healthcare and overall development of the Sittilingi valley.

Traditionally, elaborate mirror work and exquisite embroidery marked the Lambadi women’s clothes. “They learnt the craft as young girls, so that they could embroider their own clothes,” Reji told VillageSquare.in. “In the course of time, they stopped wearing their traditional clothes, and the craft also died down.”

Under the craft initiative of THI, a few older women who had learnt the craft from their grandmothers started teaching the younger women. “Neela, Gammi and Jumma, who are the older women in our thanda, taught us to embroider,” said 33-year-old Uma, who has been doing embroidery work since 2006, when the revival process started.

Interested women and teens underwent training for 10 days. “First we learnt to embroider on pieces of cloth and then moved on to working on garments,” said Uma. Training or refresher sessions are conducted for the women as and when necessary. 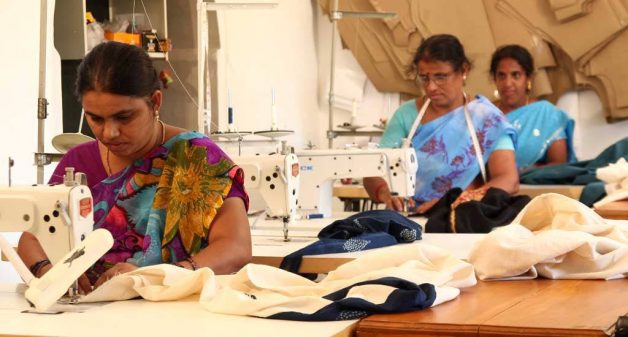 As part of their craft revival, Lambadi women have started a tailoring unit and embroider the clothes made there (Photo by Jency Samuel)

The women take pride in their skill and in sustaining the tradition. “Observing us, women from other villages try to do embroidery. But this skill is inherent that we and our children do it easily and so nicely that sometimes customers ask us if it is machine embroidery,” said Uma.

As part of the revival of their embroidery, the Lambadi women formed a craft association and decided to call it Porgai. “Porgai, in our Lambadi dialect means happiness and pride,” Uma told VillageSquare.in.

Porgai was registered as a society in 2009. According to Lalitha Reji — who is addressed simply as Tha, the last three letters of her name — though there are groups in Karnataka and Andhra, Porgai is the only group that practices the craft in Tamil Nadu now.

About 60 women from the 300 Lambadi families of Mel Thanda, Keezh Thanda, A K Thanda and Sittilingi Thanda in the valley practice the craft regularly since the inception of Porgai, with younger women showing an interest in learning it.

Starting with small products, the women have now moved on to embroidering clothes, home furnishings and accessories such as purses, wallets and bags. With scraps of cloth, they make a variety of trinkets.

To facilitate easy and full production, the association has also started a tailoring unit. Uma’s mother Beena who used to embroidery and take part in exhibitions, subsequently learnt tailoring and now stitches clothes at Porgai.

They sell the products regularly in the southern states through craft exhibitions. “Before we started participating in exhibitions, Tha used to market the clothes embroidered by us, displaying them literally like a salesperson at exhibitions,” said Uma. The women use their embroidery skills to make trinkets, which are a hit among the youth (Photo by Jency Samuel)

News of Porgai products have spread by word of mouth, through the young physicians coming to the THI hospital for internship. A new building that was constructed in 2016 with the support of the corporate social responsibility (CSR) wing of Titan has enabled Porgai to have a showroom to display their products. They have also started selling their products through their online portal.

Most of the women earn about Rs 5,000 per month. The work opportunity has stemmed migration of the Lambadis considerably. Those who own land have plots measuring less than three acres. With unpredictable monsoons, farming became an unsustainable livelihood, forcing the villagers to migrate.

“If not for this embroidery work, I would be working as a laborer in Tiruppur or Chennai,” Sunitha told VillageSquare.in. According to Reji, most of the men, and women if they accompany the men, work as construction workers.

“Having worked among them for 25 years, I can say Porgai has enabled families of at least 45 of the 60 women doing embroidery to stay back in their thandas,” said Reji.

Blimsha, who worked in Tiruppur and then in Coimbatore, returned to Sittilingi four years back, since Porgai offered him a job as a master. He also trains women in tailoring. His wife Sangeetha is also a part of Porgai. “I came back since this is my native, my home; and I can be among family,” he said.

As Porgai makes embroidered clothes in organic cotton also, they buy organic cotton grown in Sittilingi valley and send it to Gandhigram near Dindigul, where it is handspun, and naturally-dyed. This practice encourages even the youth who migrate, to come back when it rains, so as to cultivate cotton.

Embroidery work gives them the flexibility to work from home, and at hours suitable for them. Most of them being relatives and neighbors, they lend a hand when needed. “If some works need to be completed urgently, but the person is lagging for some unavoidable reason, we share the work among ourselves and complete the work,” said Maheswari.

The women said that working together helps maintain the familial and societal rapport. “Some of them used to leave the children with their grandparents when they migrated for work. Now we don’t see the social problems we observed when the families were separated because of work,” said Reji.

The women use their income for their children’s education, health needs and on essential household appliances that would give them more time to embroider.

Rama observed Reji’s children attend an alternative curriculum school a bit far from her thanda. With a strong desire to send her daughter to the same school, she bought a two-wheeler to drop her daughter at school and pays the monthly installments from her work at Porgai.

Their work has also boosted the confidence of the women. They find dignity in their work. They travel for craft exhibitions and man their stalls. Observing the preference of customers, they are able to decide on the colors and designs. And they are happy that they are breaking even.