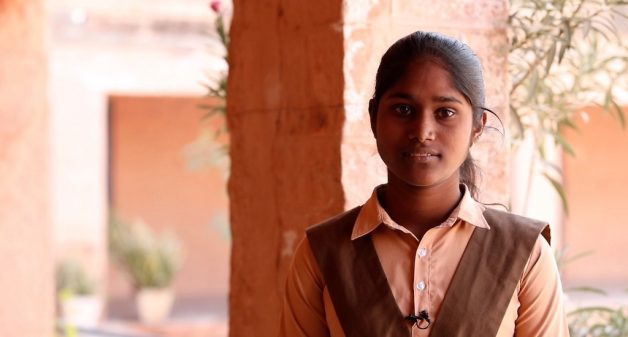 Geeta Meghwal’s decision to study science in a boys’ school, so as to follow her dreams, has prompted many girls to opt for science education (Photo by Rakhee Roytalukdar)

Geeta Sohanlal Meghwal (18), of Osian village near Jodhpur, has cleared her class XII board exams this year with 64% in the main subjects of physics, chemistry and biology. Expecting around 85%, Meghwal is not particularly elated with her results.

Her decision to take science in Rajkiya Ucch Madhyamik Vidyalaya, a government school in Osian, which has not had any girls in the science stream for at least a decade, is unusual.

Meghwal thus became the first girl in her village to take up the science stream at higher secondary in 2017, breaking gender norms. She was steadfast despite many, including her parents, dissuading her from taking up science subjects.

In Osian, an ancient village, around 65 km from Jodhpur and an important trading center between 8th and 12th centuries, girls have started taking up science following Meghwal’s lead.

School principal, Bansi Lal Jakhar recalled advising Meghwal to take up subjects other than science in the other government school exclusively for girls, as otherwise she would have to study in a class full of boys and where she was not likely to have any friends.

With 73% in her class X exams, the school could not deny her science stream based on such grounds. Jakhar made up his mind on giving her admission, when Meghwal said: “Don’t look at me as a boy or a girl but only as a student.”

“What struck me as a rare attribute was Geeta’s ability to remain focused, and her determination to pursue what she wanted despite opposition,” Jakhar told VillageSquare.in. “She insisted because she wanted to become a doctor.”

Initially Meghwal did feel a bit uncomfortable in class; she would go to the library or lab when she did not have classes. “Derogatory comments and jokes could not break my determination,” she told VillageSquare.in. “I knew I had to continue, as otherwise no other girl would dare to take admission in science ever again.”

Following in her footsteps, five girls took admission in science in Jakhar’s school in 2017. Subsequently, 11 more girls joined. They said that Meghwal’s entry into the boys’ higher secondary school inspired them to take up science.

There are now 68 girls in the school from classes IX to XII, a rare phenomenon in a village like Osian. Most of the students in science stream want to go for engineering, subsequently for government jobs and also into defense forces.

Hailing from the Meghwal Dalit community, the family’s income is meager. Her father and elder brother work at construction sites and her mother runs a small shop in their house. In a family of four girls and two boys, her sisters did not study beyond class VIII and elder brother had to drop out after a year in college.

The countless discussions among adolescent girls and training initiated by Save the Children, an NGO working on child rights and implements a project against child marriage in Jodhpur district changed her perspective. She became the discussion leader soon. 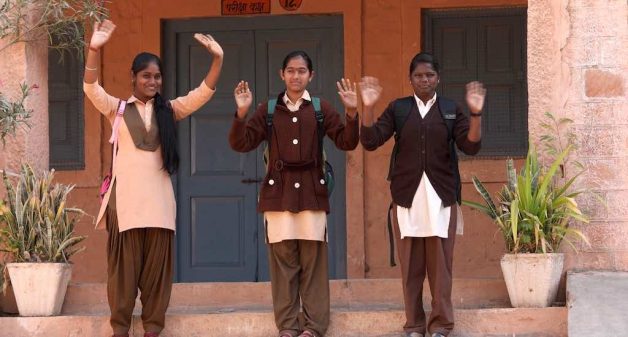 “The training changed my thought process and the way I looked at myself; it helped me talk to the principal and express my ambition and why it was important for me to pursue science,” said Meghwal. “That perhaps changed the way the teachers looked at things with a single lens.”

“A sincere student, Geeta has won awards at the district level science fair. An excellent communicator, she has participated in many extra-curricular activities of our school,” Sonu Chakla, her physics teacher and mentor told VillageSquare.in.

The drive and Meghwal’s admission have brought fresh admissions, not only in science but other streams as well. “An illiterate mother brought her two girls for admission in our school, but not in science. I told them to take admission in the girls’ school but she was keen that the girls should study here,” said Jakhar.

“Against my colleagues’ warnings, I took the risk of admitting Geeta and it is paying off,” said Jakhar. “The girls here are exempted from fees as per government policy and also the nominal fees for science stream have been waived off.” This year’s results had 64% of the science students scoring more than 70%.

Jakhar said that there has been an increasing interest in science subjects in rural areas following the setting up of Atal Tinkering Labs (ATL) in many rural schools wherein each school that applies for the grant gets around Rs 20 lakhs for establishing the lab.

The ATL’s objective is to foster curiosity and creativity in young minds and inculcate thinking on design, computational thinking, adaptive learning and computing. At ATLs, students work with tools and equipment to understand the concepts of science, technology, engineering and math (STEM).

“The tools and do-it-yourself kits at ATL, science fairs, interaction with scientific experts and workshops for science teachers have helped to increase science literacy over the past few years,” said Chakla.

The Rajasthan government plans to set up boot clubs this academic session in 71 Vivekanand schools, which will improve the temperament of students in science, technology and IT. The clubs, to be equipped to increase students’ interest in programming, would be in schools that are in the most backward regions.

Although the central and state governments are trying to build up a scientific temperament in higher secondary level, the ASER 2018 report says, in basic mathematics, only 44% of all girls surveyed in the age-group of 14-16, could solve a division problem compared to over 50% of boys.

“Girls not performing well in science and math compared to boys is because of poor education in primary and secondary classes. Science labs lack staff and equipment, barring a few Adarsh (model) schools,” K B Kothari of Pratham, an NGO providing quality education to underprivileged children told VillageSquare.in.

But the 2019 results declared by the Rajasthan Board of Secondary Education tell a different story. Girls have outperformed boys in science and commerce streams. In science stream, 95.86% girls have cleared the exam compared to 91.59% boys.

In a state that shares 50% of the child marriage hotspots in the country with 35.4% of women between the age of 20 and 24 having been married before they attained the legal minimum age, girls taking science and their better performance in the exams are pointers that girls in rural areas now have the confidence to speak up for their rights so as to change their lives.