In a remarkable turnaround, local communities have rejuvenated the weed-infested Ansupa Lake in Odisha in the span of just six months, boosting fishing and income opportunities from tourism 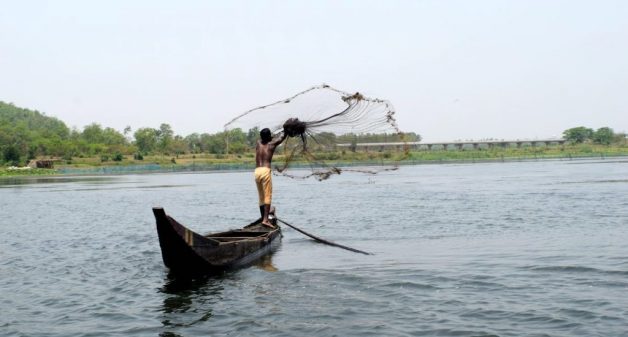 Fishing in the Ansupa Lake (Photo by Basudev Mahapatra)

Women in villages surrounding Ansupa, Odisha’s largest natural freshwater lake, are a happier lot since the work on the restoration of the wetland ecosystem began. It’s almost as if their lifeline has been restored.

According to Subarni Dalei, 45, of Subarnapur village, “The restoration of the lake has not only increased the space for fishing activities for the locals, but also opened up many other livelihood opportunities for us.”

A member of one of the four self-help groups (SHGs) under the ambit of Ansupa integrated SHG, Subarni is involved in the management of various services provided at the eco garden developed by the Chilika Development Authority (CDA), which now looks after the restoration and conservation of the wetland ecosystem. The integrated SHG, a CDA initiative, now manages the fishing activities in the lake, as also boating and other recreational facilities at the eco garden.

People, particularly the fisherfolk living around Ansupa Lake, have seen remarkable changes since the restoration of the dying water body and conservation of the wetland ecosystem began. “Three years back it was almost of no use to the local communities as there was hardly any space for fishing and allied activities because of weeds,” Debaraj Rout, 51, of nearby Ratagarh village said.

Around 50 km away from the twin cities of Cuttack and Bhubaneswar, Ansupa is an oxbow lake that was isolated during the lateral shift of Odisha’s largest river, Mahanadi, which flows nearly 2 km away from the lake now. This water body in fact looks like a horseshoe. 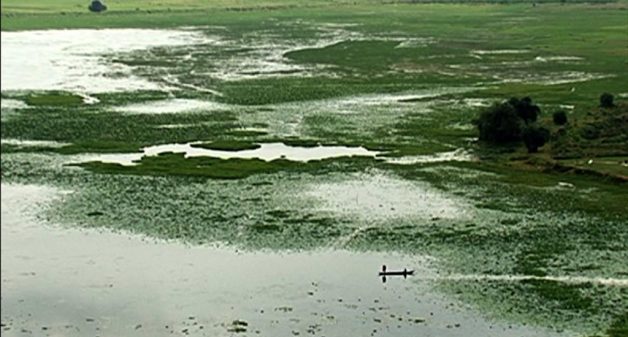 “Water bodies that get isolated from rivers supporting them normally dry up and die. But fortunately, Ansupa survived and a freshwater ecosystem came up in and around the wetland,” said Susanta Nanda, Chief Executive of CDA, who guides and oversees the restoration and conservation works at Ansupa.

Spread over an area over 700 acres and host to a variety of aquatic plants and fishes, the lake was the major source of livelihood for the surrounding villages, said Debaraj Rout, recalling his association with the lake during his school days over 35 years ago.

Large amounts of silt — about 100,000 metric tonnes a year — comprising clay and sand and heavily loaded with nitrogen and phosphate that flow in from paddy fields get deposited in the lake during rainy seasons. Its nutritious nature was an invitation for weeds and soon the lake saw proliferation of freshwater weeds of 21 varieties of submerged, emergent and floating categories, resulting in high eutrophic condition and hypoxia, according to a study.

Because of heavy siltation, the area comprising water in the lake diminished to almost half its normal size. According to Sumati Behura, 61, of Subarnapur, “As the area occupied by weeds inside the lake expanded, the space for clean water shrank drastically. It was insufficient for fishing or bathing. Even country boats found it impossible to wade through it.”

The dense weed cover blocked sunlight, leading to degradation of the quality of the water on account of the low level of dissolved oxygen in it. The result was hypoxia setting in, and survival and growth of aquatic life becoming difficult. According to Fani Bhushan Nanda, assistant conservator of forest (ACF) at CDA, “It hampered the growth of phytoplankton as well as fish.”

Soon the catch (of fish) decreased to less than one fifth (20 percent) of the normal, according to local fisherman Anama Chandra Dalai (50).

Even as the diminishing growth of fish began affecting the livelihood of the local fishing communities directly, migratory as well as resident birds started abandoning the wetland as it couldn’t offer these birds sufficient food like phytoplankton and fishes. “In its cyclic impact, the wetland ecosystem faced severe degradation and the survival of the lake was threatened,” Nanda, ACF, said.

The weed-free water area shrank to about 20 acres and was scattered across the nearly 400 acres of total water area, the data provided by the CDA for the year 2017 show.

Even though the water body came under the control of the CDA during 2008-09, the restoration works involving manual de-weeding began only in 2016. Weeds are a part of this wetland ecosystem, and de-weeding is a normal natural process that occurs regularly during the inflow and outflow of water in times of floods. However, with floods becoming a rare occurrence because of the decrease in water in the Mahanadi River, this natural process got disrupted, according to Binod Acharya, ACF at the CDA, who is also involved in Ansupa restoration works. Mahanadi River is now severely water stressed primarily owing to construction of dams and barrages upstream for irrigation and industrial purposes, as well as due to temperature soaring. As warned by the State of India’s Rivers (2016), disproportionate use of Mahanadi river water by the residents and industrial units in the Mahanadi Basin would be a matter of serious concern in the near future.

With the possibility of natural de-weeding diminishing, the CDA initiated a manual de-weeding program in 2016. But this wasn’t highly successful in restoring the lake, and in December 2018, the CDA with the support of Integrated Coastal Zone Management Programme (ICZMP) engaged a mechanical weed harvester for de-weeding the Ansupa Lake.

It’s only six months now, but the progress has been remarkable.

According to CDA data, the water body is now recovering rapidly, with nearly 295 acres of the 490-acre water-spread area becoming weed free. The water spread area of the lake went up from 400 acres in 2017 to 490 in 2019 thanks to extensive restoration.

“Last winter, the lake had over 60 bird species including 30 migratory species visiting it. Resident birds which had abandoned the wetland are now returning to Ansupa,” ornithologist Tuhinansu Kar said.

Fishing is also slowly becoming a reliable source of livelihood for the local communities. “The average daily catch of a fisherman is now around 5 kg. Catching even one kg of fish was almost impossible before the de-weeding works had started,” said Bikram Jena, 54, a fisherman of Malbiharpur who depends on fishing in the lake to feed his seven-member family.

In order to engage the local community, which is the primary beneficiary of the ecosystem, in protection and conservation works, the CDA formed the Ansupa Integrated Self Help Group accommodating four local SHGs in it. The integrated SHG is now managing all activities in the lake as well as services related to wetland dependent tourism.

“We regulate fishing activities in the lake by giving it on lease to the Ansupa Matsyajivee Society, an organization of fishermen in the locality. We also manage the tourism activities at the eco-garden complex developed by the CDA and maintain the complex,” said Shobha Dalei, 45, a member of the integrated SHG. 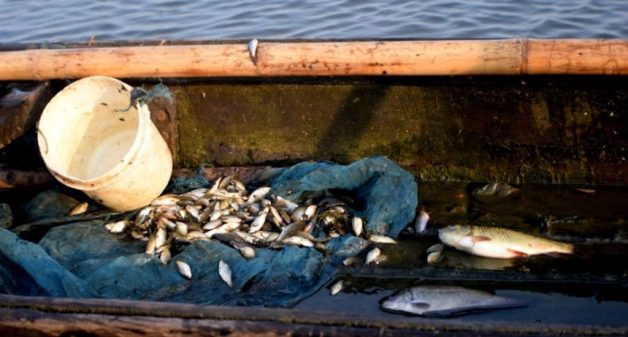 A third of the income generated goes to the community members engaged in various activities, and a part of it goes to the CDA that looks after restoration and conservational activities. The rest is kept as corpus fund, said Debaraj Rout, who works as a supervisor at the eco-garden.

It’s not just the SHG members and youth recruited by the CDA who are engaged in conservation and maintenance of the ecosystem. All those who depend on the wetland for their livelihood are also involved, Rout added.

The major challenge before the CDA after de-weeding the lake would be to make it a sustainable habitat for its life systems to thrive and thus an assured means of livelihood for the local communities.

Since the flow of water from Mahanadi is projected to deplete further in the wake of rising temperature and climate change, and developmental needs of the riparian states, “our primary task was to conserve rainwater flushed by nearby Sarandagada and Bishnupur hills at the surface as well as in the subsurface soil, and recharge groundwater sources,” said CDA Chief Executive Susanta Nanda.

“While the traditional water channels for inflow and outflow of water are being restored, staggered trenches are also being dug around to filter out the eroded soil from the water. These trenches hold water for longer time and facilitate percolation of water on to the surface of the soil, supporting the lake’s ecosystem throughout the year and helping agriculture in the 3000-hectare catchments during the dry seasons,” he added.

During de-weeding, weeds in some parts of the lake were left intact to make the wetland a healthy habitat for resident as well as migratory birds. To augment the food supply for the birds and to enhance livelihood opportunities for the local communities, the CDA has been releasing into the lake fingerlings of freshwater fishes, including the carp species that are popular locally.

“One of the major challenges here is to maintain the quality of water by reducing the nutrient inflow to keep weeds in control, help growth of fishes and sustain aquatic lives. For this, we have been requesting local farmers to take to organic farming and avoid using chemical fertilisers,” said  Nanda. “Things are moving in a positive direction. And to stop encroachment we are talking to the district administration as it is a revenue related matter,” he added.

Across the globe people are worried about the future of wetland ecosystems. Ramsar Convention’s Global Wetland Outlook reveals that wetlands are disappearing three times faster than forests, and that between 1970 and 2015, the earth lost nearly 35 percent of its wetlands.

In such a grim scenario, the Ansupa Lake returning to life and the health of its ecosystem improving mean a lot to the global community deeply worried about the future of wetlands. “It’s not only an encouragement for us, it also bears hope about conservation of degraded wetlands,” said Nanda.