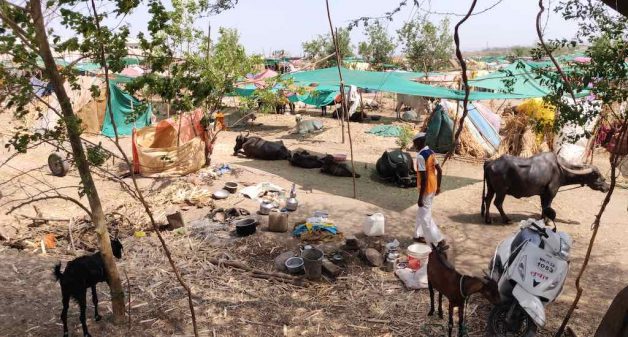 Matabai Borkar was cooking bhakri roti with jowar flour on a temporary chulha made with three bricks in the open at 1.30 pm. She was in a camp with her cattle. She said that fodder and water were not available in her village even if she was prepared to pay for them.

Maharashtra, including Man administrative block in Satara district, received low rainfall, causing poor kharif harvest; no rabi crops were raised at all. Because of low rainfall, there is no water and fodder for cattle. Hence, the government as well as private organizations started many fodder camps. Unavailability of fodder and water has compelled many to get their cattle to fodder camps.

In Man taluka, villagers including farmers earn their income through cattle by selling milk or meat, as they cannot depend on agriculture alone, due to continuous droughts.

Pradip Mane and his wife Rukmini of Mhaswad village said that their livelihood depended of cattle despite having eight acres of land. “Both of my sons are studying in reputed private colleges in Pune; I was able to pay lakhs of rupees as fees, thanks to my cattle as they give that much of milk,” said Pradip Mane.

Parubai Dhumal, a farmer having one acre of land, owns seven goats. “My family of two sons and their wives and kids survive on selling goats for meat every five or six months,” she told VillageSquare.in. “In emergencies like health problems, I sell a goat to pay the bills.” 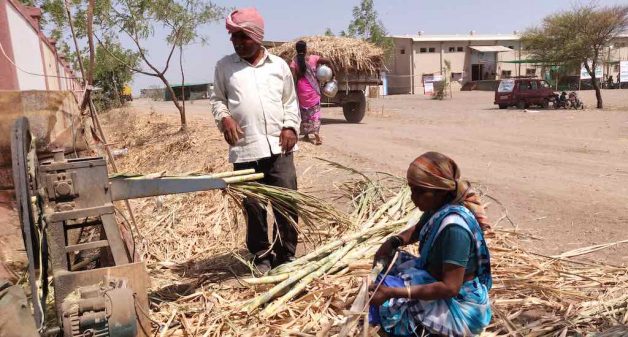 Pradip Mane and his wife Rukmini, who were at a fodder camp, do not mind personal discomfort as the camp sustains their cattle (Photo by Varsha Torgalkar)

Cattle provide livelihood for 45-year-old landless widow Anita Irabkar of Bangarwdi. She got her three daughters married by selling milk and cattle after her husband died many years ago. Currently her buffalos not only provide her income but also substitute for her family.

With failing monsoons, the farmers were worried how they were going to feed their cattle as there was hardly 350mm rain this year against an average of over 600mm. Man taluka has over 80,000 cattle, as per the statistics of the state’s Animal Husbandry Department.

“Man is known for drought since centuries due to its elevation and low rain. Despite people having land, their income comes mostly from selling milk to dairies,” Jayant Sinha, who has started a fodder camp, told VillageSquare.in.

Jayant Sinha began a fodder camp in Mhaswad in Man taluka in January as he felt that farmers should not sell their cattle. His camp has over 8,000 cattle; each animal is given 18 kg of fodder, water and feed. A veterinary doctor is also available.

“I brought four buffalos of mine and two belonging to my relatives to the fodder camp in January,” Irabkar told VillageSquare.in. “I am staying at the camp to take care of my cattle because they are also like family.”

Borkar said that she and her family were thankful that the camp took her nine cattle. “Without camps, we might have to sell our cattle, that too to a butcher. Nobody is ready to buy cattle due to drought,” Borkar told VillageSquare.in. 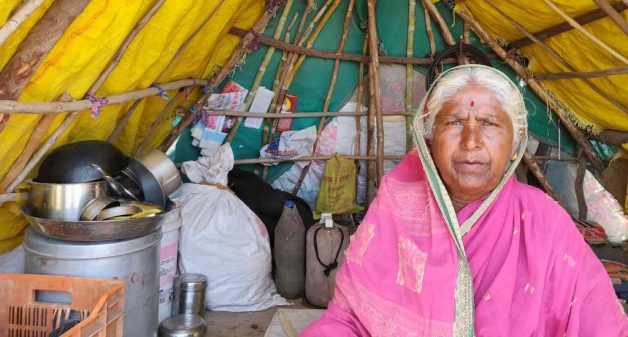 The farmers put up small makeshift huts made of sacks and saris, in which two persons can hardly sit. They sleep outside on mattresses, braving snakes and insects. They do not like to leave their cattle alone and hence bear the discomfort of staying in 40 degrees Celsius temperature or more, without a fan and cooking in a chulha under the scorching sun. The situation is the same at all fodder camps.

While cutting fodder into smaller stalks in the machine brought from their house, the Mane couple, who had brought 16 cattle including jersey cows and buffalo to the fodder camp, said that they do not mind the discomfort for the sake of their cattle.

People having sheep and goats have been going through difficulty to get water and fodder. Man taluka also has a considerable population of Dhangar tribes who tend sheep. For many years, they have been migrating to greener areas like Kolhapur or villages near small rivers during summer.

Most of the farm laborers and marginal farmers having less than two acres of farmland generally own sheep or goats or chicken. They said that the government has not thought about starting fodder camps for small animals like goats, sheep and poultry.

Parubai Dhumal is in a private camp with her sheep. “Many from my village could not come here as they do not have big cattle. Currently their goats do not fetch more than Rs 4,000 while generally the price is between Rs 10,000 and Rs 15,000. They don’t have any option but to sell as it requires more money to buy water and fodder,” she said.

“Once rains start, rates of cattle soar. For example, a buffalo costs Rs 50,000 and more when monsoon is good, but currently people are not ready to buy it even for Rs 15,000,” said Borkar. “My farming depends on bulls for tilling, cows and buffalos for fertilizer and so they are our asset.”

M. Desrada, social activist and economic expert, said that the state should provide fodder and water free of cost at the farmers’ doorstep. He said, “That would save efforts and money of the government and it would be more convenient for marginal farmers and farm labors, as otherwise one family member has to stay at a camp,” he told VillageSquare.in.