Lack of literacy and complicated documentation were hurdles that hampered financially dependent rural elderly from accessing the government’s welfare schemes. Educated youth are helping them get the benefits 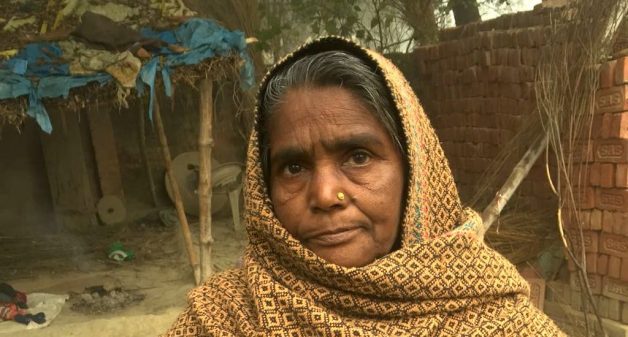 Unable to complete documentation formalities, elderly in rural areas like Asharfi Begum did not get the government’s old age pension, till educated youth helped them access it (Photo by Anand Pande)

“There were mistakes in my Aadhaar, and I was not able to produce my income certificate due to problems beyond my understanding. I gave up on this pension thing.” However, the life of Asharfi Begum of Sanathpur village is much better now as she recently started getting Rs 500 per month under the old age pension scheme.

Though this money is not a lot, it takes cares of her basic needs. Broke due to various family problems, illiteracy and fear of documentation work, she was not able to engage in the formalities required for availing the benefits of the scheme.

However, with help and guidance from the educated youth of her village, now she has availed the benefit and feels happy and secure. “It is a warm feeling that there is someone who thinks about the elderly like me and ready to help anytime,” said Asharfi Begum.

Elderly people are a highly vulnerable section of the society, but they are the most neglected, starting from the family level. This population is voiceless and disunited. As per 2011 Census, there are 15.44 million elderly in Uttar Pradesh (UP), out of which 12.44 million are living in rural areas. The landholding of rural agrarian families is shrinking, and the youth are migrating in search of employment.

As per Building Knowledge-base on Population Ageing in India (BKPAI) research project reports-2011, around 65% of the elderly have some or the other chronic health ailment. So, one can understand the financial needs of the elderly towards health.

The life expectancy at the age of 60 years in UP is 15.8 years for men and 18 years for women. It means, on an average, one elderly person would be there in a state of dependency for these many years; it is crucial from the planning point of view.

After realising the gravitas of the problem, the government started many elderly welfare schemes over the last decade. Provisions such as elderly pension scheme and widow pension scheme give direct monetary benefit to the beneficiaries. 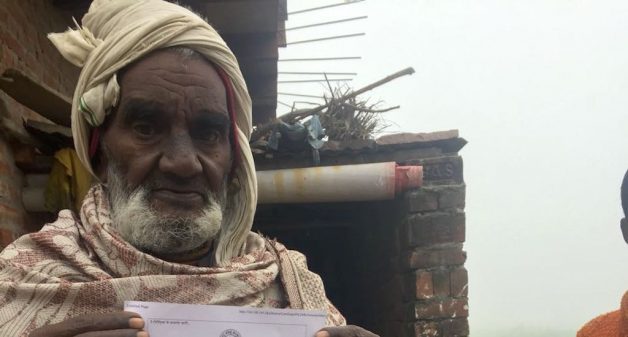 Educated youth are helping the elderly like Riyakat Ali get old age pension, by assisting them with the necessary documentation (Photo by Anand Pande)

But the elderly in the villages are not aware of the various schemes that can help them and improve their lives. Even if a few of them are aware, there are many hurdles in getting the actual benefits of the well-meaning schemes. Most of the people who are eligible for the benefits of various schemes are unaware of the process involved.

The literacy rate of the elderly in rural UP is 30.7%. They lack the confidence to do the complicated documentation tasks required for getting the benefits of various schemes like the old age pension scheme. Also going to district headquarters for documentation related queries or further persuasion is not an easy task for the elderly. There is no help as their children are away or are negligent.

Unfortunately, last mile hurdles are proving to be a major challenge even for the bureaucracy. They are not able to reach out to deserving beneficiaries due to overload of work. In many welfare schemes, there is limited enrollment and funds are not utilized optimally.

Professionals and the educated people of Raipur village in Gyanpur administrative block felt this evident gap. They are the industrious people from the same village, who completed their education with a struggle and are working in different locations.

Relatively better placed than the villagers, whenever they looked at the status of the elderly in the neighborhood, a feeling of unease disturbed them. They started helping the elderly in their capacities; but there were many who needed help.

This group of few, with age range from 25 to 45, has inspired others, and many are showing interest to get associated with such effort. After understanding that they could help in various ways and many were willing to assist, the group started a not-for-profit organization called Fundamental Action and Research Foundation (FARF), which run completely on voluntarism.

Today, there are more than 25 schemes and programs for the elderly population in India and most of them are underutilized. Not much action is seen on ground, irrespective of good intentions of the lawmakers. However, things seem to be changing slowly.

There are many success stories in villages across India, where the youth have struggled to overcome various barriers to achieve great careers and livelihood options. But it is crucial for the development of other rural poor that this well-settled youth use their experience and talent for the guidance of the needy.

“There are many who want to do something good for their community, and this effort is not only inspiring them but also showing them the path of working for the society,” said Anand Pande, one of the founder members, who works in a multinational company in Bengaluru.

The youth are helping the needy elderly, by visiting various offices to complete complicated documentation work, so that the elderly receive the benefits of the schemes. They have plans to look into other such underutilized schemes as well. Their work is also spreading along with volunteer pool, and currently, the work is going on in six villages in Bhadohi district of UP.

Abhijeet Jadhav works with VikasAnvesh Foundation in Pune. Earlier, he was faculty at Tata Institute of Social Sciences, Mumbai. Views are personal.