Despite the drought gripping the Marathwada region of Maharashtra, one village in the region has flourished by growing grapes using innovative water saving methods 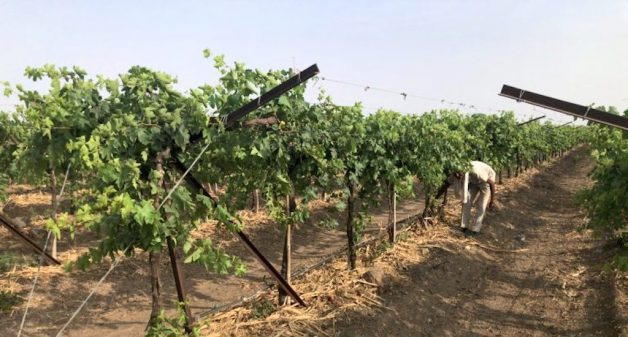 Kadwanchi is an oasis in the sun-bleached landscape of Marathwada – a region in India’s western state of Maharashtra at the epicentre of the drought that is now afflicting almost half of India.

The vineyards have withstood the worst drought in the region since 1972, a drought that has devastated farmers’ livelihoods across the state, with crop outputs plummeting and large numbers of people abandoning villages in search of water and work.

Pandit V. Wasre is the agricultural engineer behind the transformation of Kadwanchi. He works at the Krishi Vigyan Kendra (Agricultural Science Center, or KVK) at the district headquarters Jalna. Grapes are the least water hungry of all orchard crops, he says, explaining it is perfectly sustainable to grow grapes in arid conditions of Marathwada as long as two steps are taken. One, hold every drop of rainwater by digging trenches, bunding (raising the earth) at the edge of every farm, making farm ponds lined with plastic to prevent percolation and planting trees in every bit of available land. Two, water the vineyards only through drip irrigation, and cover the root of every plant to minimize evaporation.

But what about evaporation from the large farm ponds one sees all over the village? “Yes, of course the water evaporates from them,” says Sarpanch (village head) Chandrakar Shivaji Kshirsagar. “But before March, we don’t need to use the water from these ponds for irrigation. Till then, we have enough groundwater. And before March, the sun is not that hot, so there’s still enough water in my pond at the peak of summer in June. Hopefully, the monsoon will arrive soon and fill all the ponds again.” 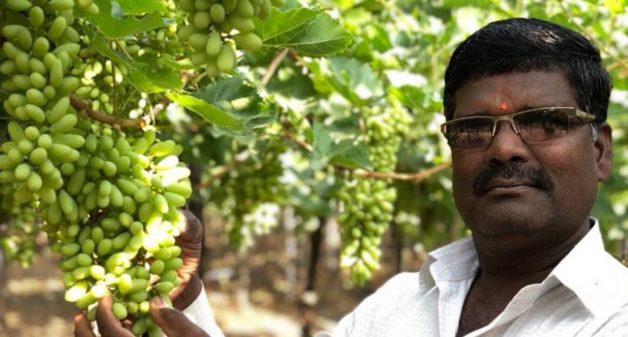 Kadwanchi Sarpanch Chandrakar Shivaji Kshirsagar with the product of his own vineyard in the middle of drought-hit Marathwada (Photo courtesy C.S. Kshirsagar)

Chandrakar Kshirsagar is a famous man, much feted by politicians and environmentalists, written about by researchers. He says he is still worried about water shortages, because the groundwater will not be replenished if it does not rain. Every drop in Marathwada’s seasonal streams and rivers is accounted for already. All the dams and reservoirs are dry. In the absence of rainfall, all the engineering works prove inadequate.

The only option is to reduce water demand for crops , says Vijay Anna Borade, head of the Jalna KVK and the doyen of India’s experts in dry land agriculture. This can only be done by planting the right crops and using drip irrigation to minimize water use. It is not enough to plant only traditional dry land crops such as maize, because farmers do not earn enough by selling these. They need cash crops, and in Kadwanchi, they have found grapes to be the optimal solution. They grow only table grapes, because wine grapes are far less productive, though there are plenty of wineries in nearby Nashik to provide a ready market. The farmers don’t really need to worry about marketing – traders come to Kadwanchi from all over India to buy the grapes.

Signs of rising prosperity are visible all over Kadwanchi. It is the lone village for miles around where new bungalows are being built everywhere. Despite the long drought, 100 more acres have been planted with vineyards this year.

Not everything has been a success in the village. The scientists introduced both grapes and pomegranates in Kadwanchi, but only grapes flourished. Many farmers in Jalna and Beed districts who have planted mausambi (sweet lime) orchards are struggling, because the plants are wilting in the heat despite drip irrigation. There are hardly any fruits this year, and for many the investment over 15-odd years is likely to come to nothing.

So why is the Kadwanchi success not being replicated everywhere? It’s complicated, Borade says. Not every soil is suitable for grapes. On top of that, if everyone started growing grapes (or a similar crop), the price would crash. 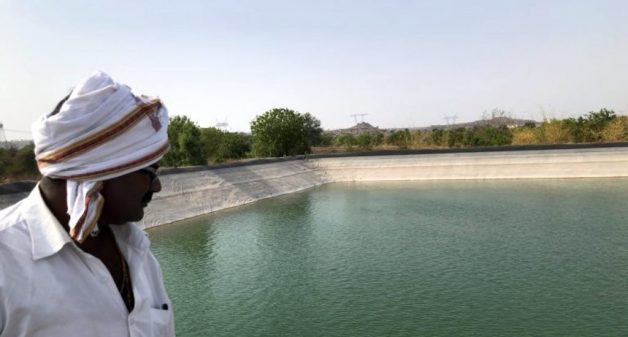 And villagers have to put in extra effort, Wasre adds. “We dug trenches for water percolation in the common pasture of the village; we planted trees there. That is an essential first step. But all that effort would have counted for nothing if the residents of Kadwanchi had not protected those trees and the common pasture from encroachment. When farmers from other villages ask me if they can have the same income as the people of Kadwanchi, I ask them if they are ready to do this. Most of them are not even ready to dedicate a bit of their farm for a plastic-lined pond that would be for their own use. It can’t work like that.”

India’s central and state governments have lots of incentive schemes to move farmers from wasteful flood irrigation to controlled drip and sprinkler irrigation, but the uptake has been low, even in water scarce parts of the country. The reason is a complex mix of semi-literacy, lack of awareness, inability to make a capital investment however small, the difficulty in obtaining farm labour, apathy on the part of the agricultural extension bureaucracy and so on. This clearly cannot continue in an era when water availability has become more uncertain due to climate change.

Joydeep Gupta is a senior journalist based in New Delhi. Views are personal.

This article was first published in the Third Pole.

Joydeep Gupta is a senior journalist based in New Delhi.