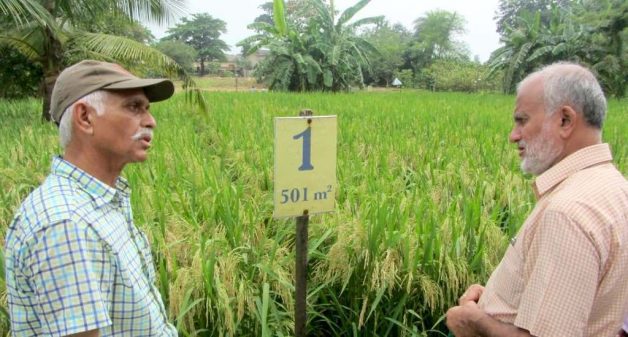 The farm at Saguna, where the new rice-growing technique was introduced by Bhadsavle (left), attracts scientists like the former director of Indian Council of Agricultural Research (Photo by Hiren Kumar Bose)

“I followed the Saguna rice technique (SRT) method of planting paddy in 2017 on three acres after I came across the same in a farm in Karjat a year earlier. The yield was 15 quintals per acre, against the maximum yield of 12 quintals through the conventional method,” said Shrinivas Pande. “Besides, I saved immensely on seeds, labor, fertilizer and weedicide.”

Pande, a former journalist, and now a progressive farmer in Khumari village of Ramtek, 40km from Nagpur, conducts free workshops on SRT for farmers visiting from Sholapur, Kolhapur, Jalgaon, Bhandara and Chandrapur.

In the rice-growing centers of Maharashtra, farmers in increasing numbers are adopting an innovative paddy-sowing technique, which not only assures them abundant yield but also leads to reduced labor costs and helps conserve the topsoil.

Rice is the second important crop of Maharashtra and is grown over an area of 14.99 lakh hectares with an annual rice production of about 32.37 lakh tons. The state’s average productivity is 2.01 t/ha, ranking it 13th in rice production in the country.

Though the area under rice crop is more in the Vidarbha region, it’s the Konkan region, which includes the districts of Ratnagiri, Sindhudurg, Thane and Raigad that leads in output, with 42.91% of the state’s total rice production.

Growing paddy, a water-intensive crop, involves deep ploughing and puddling of soil, followed by transplantation of the seedlings. Ploughing loosens the top 10 to 12 inches of soil. Farmers over generations have believed that the crop would be good only if the land is ploughed well. However, huge consumption of water for paddy grown by the traditional method is a matter of concern across India as the country faces a water crisis.

Farmers in Konkan across different ages are abandoning the traditional flooding and transplanting method. They are taking to conservation agriculture technique for paddy farming, having been influenced by a neighboring farm or having come across the same on a video-sharing platform.

From Ramtek in Nagpur to Karjat in Raigad, from Maval in Pune to Jaoli in Satara, from Bhandardhara in Ahmednagar to Shahpur in Thane, from Armori in Gadchiroli to Mul in Chandrapur, cultivators across the districts of Maharashtra are adopting the zero-till SRT, developed by Chandrasekhar Bhadsavle, an innovative farmer and recipient of Maharashtra government’s Krishi Bhushan award. 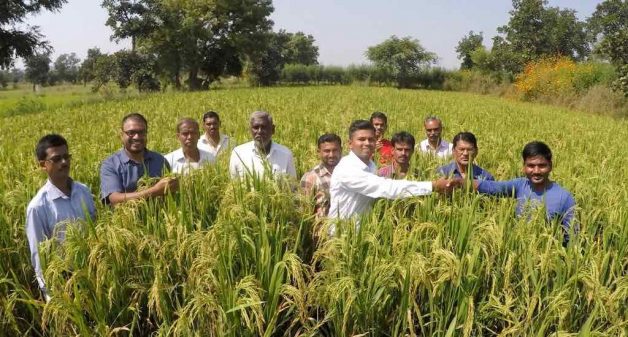 Now in his late 60s, Bhadsavle, who graduated from the Ratnagiri-based Konkan Krishi Vidyapeeth, acquired his Masters degree in food technology from the University of California and worked in various food-related companies there.

He returned to India in 1976 at the bidding of his father, a freedom fighter, to set up the state’s maiden agro-tourism initiative, Saguna Baug spread over 52 acres, in Neral of Raigad district, 79km from Mumbai.

“My father who worked among Adivasis insisted that I worked in the field of agriculture and I have been at it since then,” said Bhadsavle, while explaining the nuances of SRT that he developed in 2011 and started promoting two years later.

In SRT, after preparation of the raised bed, holes are made with a pre-designed iron frame, seeds mixed with granulated fertilizer are dibbled in the soil and weedicide is sprayed after moistening the soil, by rain or irrigation.

In SRT method, the raised bed is not wrecked for successive crops. After the paddy is harvested, the stubble is not removed, but allowed to remain while the soil is readied for the next crop with another spray of weedicide.

The next crop – groundnut, wheat, soybean, maize, vegetables, sunflower, etc. – is planted among the stubble on the same bed. The raised bed can be used for five to six years for successive crops, resulting in an increase of soil carbon.

The new system alters the crop geometry and land configuration, offering more effective control over irrigation and drainage as well as their impacts on transport and transformations of nutrients, and rainwater management. “Through our raised-bed direct seeding technique, we plan to achieve the soil’s organic carbon of 2.5% from the present 0.5%,” said Bhadsavle.

“The technique strives to make agriculture sustainable so that the entire the ecosystem is enriched ensuring optimum use of all inputs – water, fertilizers, seeds, weedicides, etc. In short, receiving more output from fewer inputs,” said M. V. Ashok, formerly of National Bank for Agriculture and Rural Development (NABARD) and presently honorary Tata Chair professor, at Tata Institute of Social Sciences. 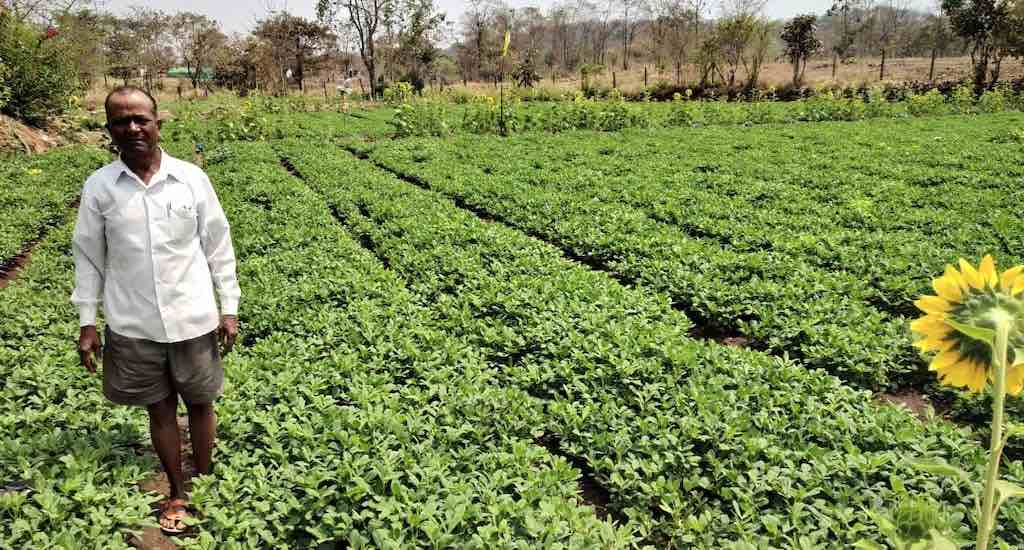 Speaking to VillageSquare.in, Ashok, who presented a paper on SRT at the national conference on Farmer-friendly Water Conservation Technologies for Mitigating Climate Change Impact, held in Ooty in January, said, “The cultivation practices do not pollute the environment, rather improves it on many parameters such as prevention of soil erosion, increased soil fertility and repair of degraded ecosystem.”

Always on the lookout for new crops and cultivable systems, Mahesh Bhoyar (30), a postgraduate from Gunthara village, tried SRT method on a half-acre plot and was impressed by the yield. “I plan to try it on my entire plot of one-and-a-half acres,” Bhoyar told VillageSquare.in.

Likewise, Ananta Kale (44) of Gamnoli village in Pune’s Maval taluk, who tried the technique on one guntha (1100 sq. ft) of land, was rewarded with a yield of 80kg of rice. He followed it up with lettuce during the Rabi season, and harvested 20 tons of the vegetable.

Arvind Muppawar (45) of Bothli village in Sawli taluk of Chandrapur, who switched to SRT in 2016 on a four-acre plot, harvested 24 quintals of rice per acre. Introduced among 30-odd farmers in Karjat in 2013, SRT is presently being practiced by over 3,000 farmers across the state.

Though the technique is yet to be accepted by agronomists working in the state’s rice research institute, it has been accepted by the Department of Agriculture (DoA) of Maharashtra for their Public-Private Partnership – Integrated Agriculture Development program’s objective to reduce costs while maintaining yield.

In a demonstration of sorts, the DoA tried the SRT method under National Food Security Mission 2015-16 in Medha and Kudal of Jaoli taluk and concluded that compared to the conventional practice, SRT succeeded due to reduced use of weedicides, increased plant height and improved yield.

Agronomist Anant Sadashiv Dalvi of Regional Agricultural Research Station, Karjat in Raigad, while commending the merits of SRT, like reduced costs, promotion of soil health and better yields, believes it does have a drawback like in the conventional method. “It’s the problem of weeds,” he told VillageSquare.in.

Meanwhile, Bhadsavle and his team has been tasked by the World Bank supported Maharashtra’s Project on Climate Resilient Agriculture (POCRA) to train farmers in the drought-prone areas of Marathwada and Vidarbha. So far 50-odd farmers from Aurangabad, Parbhani, Beed, Nanded, Osmanabad, Latur and Jalna have attended SRT training at Saguna Baug and will adopt the same to sow paddy in the coming monsoon.