Seemanchal farmers, who switched from wheat and jute to water-friendly maize, are earning less despite high demand and good yield, and look to the government to intervene 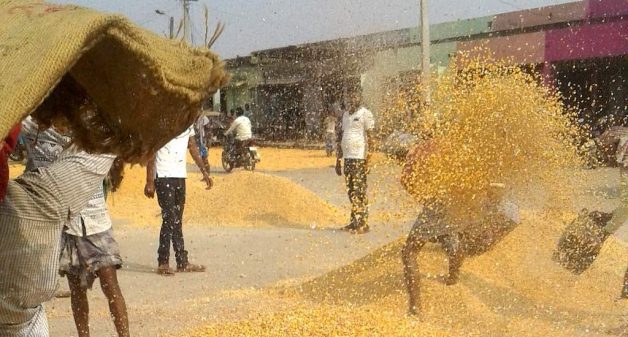 Rajeshwar Mandal, a marginal farmer in Baisi of Purnea district who is growing maize crop twice a year, was happy with a bumper harvest again this year. But his happiness did not last long as he got low price for his maize.

“What can we do? We work hard, put our 100% effort to produce maize crop more than anywhere but we hardly get right returns. Maize farmers are exploited by everyone,” said Mandal.

Mandal and thousands of farmers shifted from cultivating wheat and jute to growing maize. Seemanchal region that includes four districts came to be known as the maize hub. But the rich harvests are leaving farmers with lower profits.

Till a decade ago, maize was grown in a small way. As high yields, high demand and good profit brought the crop its pila sona (yellow gold) tag, more and more farmers took to cultivating maize.

“Earlier we used to grow jute. It was our main crop of livelihood,” Fazlu Rahman, a marginal farmer growing maize, told VillageSquare.in. “Then we started growing maize.” During Rabi season (winter), many farmers switched from paddy and wheat to maize.

Mandal, who used to grow wheat and jute in the 4 acres of fertile land he owns, also shifted to maize cultivation. Mandal said that now maize crop is the main source of livelihood for most of the farmers in Seemanchal, a backward region.

Village after village in Seemanchal can be seen with standing crops of maize throughout the year. “Right from education to getting our daughters married, to medical treatments, we are dependent only on maize,” Mandal told VillageSquare.in. He said that months of hard labor did not give him and his family of five a good living. 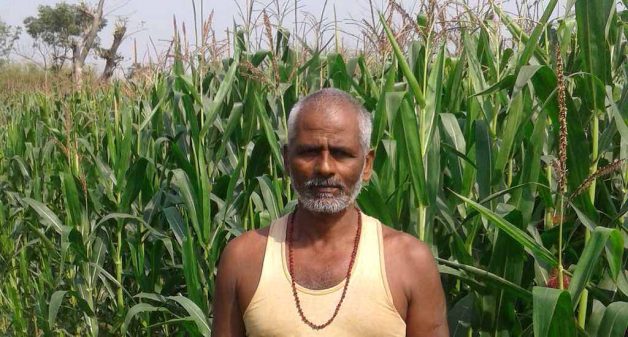 Mandal said that the rate of maize was Rs 2,300 to 2,400 per quintal in the markets during Lok Sabha polls when the crops were not ready for harvest. After the polls concluded, the rate dropped to Rs 1,700 to Rs 1,800 in different mandis (markets).

Explaining this to VillageSquare.in, Rahman said, “As poor farmers, we need money immediately after the maize is harvested, unlike big and rich farmers who have the facility to store their produce and can wait till they get a good price.”

Mandal and Rahman are two of the thousands of farmers, who are in distress. “Seemanchal has become a maize hub of the country because of us but we are not getting what we should because middle men, traders and businessmen gobble up our profit,” said one of them.

According to government’s agriculture department officials, Bihar has a high maize productivity of 3,904kg/ha, which is more than the national average of 2,889kg/ha. Bihar has witnessed a visible growth in maize production in the past decade.

Bihar is India’s third largest producer of maize. The state produced 1.36 million tons of the crops in 2005-06. This increased to 3.85 million tons in 2016-17, as the high-yielding maize of Rabi season has been replacing winter wheat and paddy in the state.

Pappu Yadav, a maize trader, said that farmers sold maize to them and they traded with outsiders. “As maize is available in plenty and is cheap, this place has become a hot maize trading center throughout the year,” Yadav told VillageSquare.in.

Sunil Kumar Keshri, a maize trader at Gulab Bagh, the largest maize trading center in Purnea district, said that he has been sending maize outside Bihar, particularly to West Bengal, Maharashtra, Punjab, and Tamil Nadu. 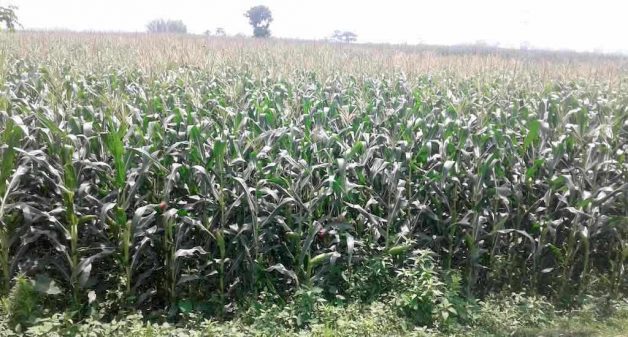 “Demand for maize keeps growing year after year. Traders from Nepal and Bangladesh are also taking maize from this market, Keshri told VillageSquare.in. “Big brands like Godrej and NCML are also trading maize from here.”

More than 17 lakh tons of maize is grown annually in Seemanchal and Koshi. Out of which more than 14 lakh tons purchased by big traders and MNCs, and sent outside. About 3 lakh tons is consumed locally. Indian railways had a good revenue sending maize to places outside Bihar.

Mahendra Yadav, an activist, said that unlike procuring paddy and wheat directly from farmers through Primary Agriculture Credit Societies (PACS), the state government does not buy maize, and hence there is no minimum support price (MSP).

“This not only deprives farmers of MSP, it also gives a free hand to traders and businessmen to decide the price,” he told VillageSquare.in. “Thousands of farmers grow maize but hundreds of middlemen, traders and MNCs earn more at their cost.”

“We are not getting good profit from maize because those purchasing from us are minting money; they are earning more than us,” said Rahman. He said there was lack of government support to ensure right price for the maize they grow with hard labor and after investing money.

“I manage to survive because of the little income from the maize that I am forced to sell soon after harvest in May every year,” said Mandal. “But local middle men, businessmen from other places and agents of export companies are making a fortune from our maize that they manage to purchase from us at the cheapest price.”

Bihar’s agriculture minister Prem Kumar has repeatedly stressed the need for value addition in maize for making its cultivation more profitable for farmers and to develop storage capacity and processing facilities.

This factor was highlighted during Action on Climate Today – Climate Change Innovation Program (ACT-CCIP) of United Kingdom’s Department for International Development (DFID) in its latest report that only 8-10% of maize produced in the state is processed despite an 80-85% marketable surplus.

According to their value chain analysis report, only a third of the demand for maize in Bihar is driven by the livestock and poultry feed industry and a tenth by local consumption needs. The remaining share hits the export markets in Southeast Asia, Nepal and Bangladesh.

Unlike the top maize producers, Andhra Pradesh and Karnataka, area and production expansion of Rabi maize in Bihar is not driven by industrial demand. The report mentioned that direct selling and minimizing middlemen in maize value chains might fetch the farmer a higher share of the consumer’s rupee.

Maize farmers (Rabi) in Bihar get less than a third of the consumer’s rupee, while processors earn the highest share among the players. Currently 33 operational units in Bihar have the capacity to process only one tenth of its annual production.

According to state agriculture department officials, nearly 65% of total maize in Bihar is grown in Seemanchal and Koshi region. Despite bumper maize harvest, farmers are unhappy about the low prices and look for the government’s support for better prices.

The lockdown disrupted the supply of an FPO’s carbide-free mangoes to its market in Ahmedabad. Collective action by Anand’s institutional staff enabled delivery of mangoes directly to consumers

Weaving cloths of increased widths that would lend khun fabric to be made into clothes other than saree blouses, khun weavers move beyond rural patronage and into fashion world

The Northeast, with its past social instability and lack of livelihood avenues lags in development. The pandemic gives the region an opportunity to develop a new economy